This pocket-sized shaggy reptile hopped around a pre-dino world

The earliest dinosaurs and pterosaurs were probably also bitsy. 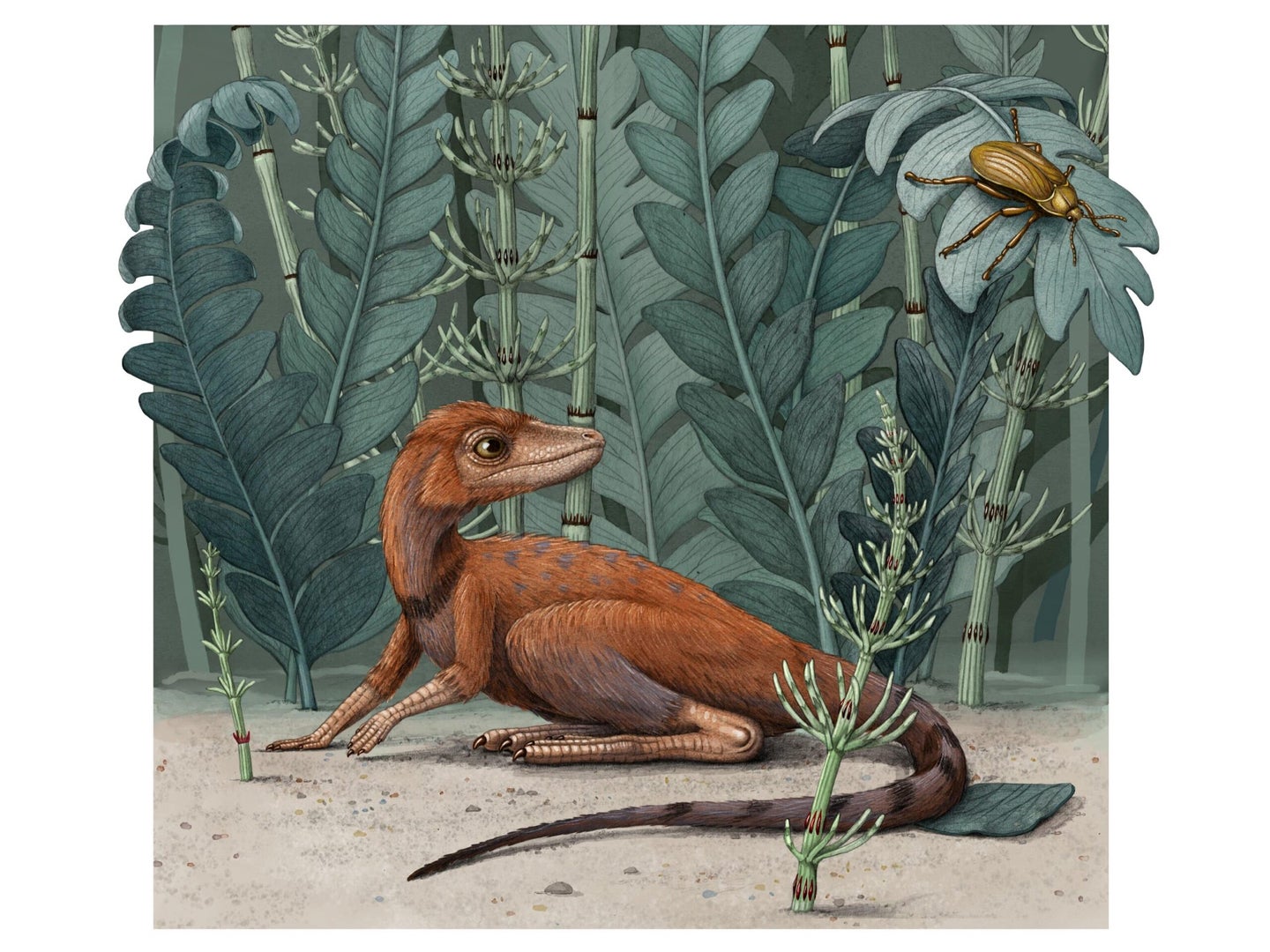 About 237 million years ago, a tiny, bug-eating reptile hopped along the sandy riverbanks of present-day Madagascar. Standing about 4 inches tall at the hip, this little creature lived just a few million years before the advent of dinosaurs and pterosaurs—the largest animals ever to walk the land or take to the skies. Its petite stature suggests that dinosaurs and pterosaurs may also have had very humble beginnings.

“Their early history is very mysterious because there are very few fossils,” says Christian Kammerer, a paleontologist at the North Carolina Museum of Natural Sciences in Raleigh, who reported the ancient reptile’s discovery on July 6 in Proceedings of the National Academy of Sciences. “Looking at body size evolution in the group, we find good evidence that the common ancestor of dinosaurs and pterosaurs…would have [had a] very small body size.”

Kammerer and his colleagues named the little reptile Kongonaphon kely, which is derived from Malagasy and ancient Greek words that mean “tiny bug slayer.” Kongonaphon belonged to a group called Ornithodira, which also includes dinosaurs, pterosaurs, and their descendants.

Among the pieces of the partial skeleton that Kammerer’s team identified were an upper jawbone and bones from the arm, leg, foot, and tail. Kongonaphon’s teeth are small and cone-shaped and lack the serrations seen in the steak knife-shaped teeth that belonged to larger predators. Instead, they resemble the teeth that you’d find today in small, insect-eating lizards.

“By looking at wear on teeth you can tell what fossil animals were eating, and that also matches up with an insectivorous diet,” Kammerer says. “We expect this was a small, very light-bodied predator of invertebrates, mostly insects, [that was] probably running around—maybe hopping around—in its environment.”

The researchers also examined fine slices of Kongonaphon’s shinbone under the microscope. Like trees, dinosaur bones contain growth rings that can be used to estimate age. Kammerer’s team determined that the Kongonaphon was at least two years old when it died and was no longer growing rapidly, suggesting that it had reached maturity.

The Kongonaphon’s right thighbone was missing one tip but probably measured about 1.57 inches in length. Thighbones are one of the main sources of support for the skeleton, which means they can be used to gauge an animal’s total body size. It’s possible that pocket sized ornithodirans like Kongonaphon were common during the Triassic Period, but their tiny bones were rarely preserved as fossils. “Larger bones are less likely to be totally destroyed by scavengers or torn apart by the elements before they get buried,” Kammerer says.

Kammerer and his colleagues also examined how body size may have evolved over time in ornithodirans and other reptiles. While Kongonaphon was probably not a direct ancestor of dinosaurs, its small size is part of a larger trend that indicates that ornithodirans became smaller shortly before dinosaurs and pterosaurs emerged. Their small size and insectivorous diet may have allowed them to avoid competing with the ancestors of mammals and much larger reptiles, which dined on plants and larger animals.

Becoming smaller may have also prepared ornithodirans for the evolution of flight. “All of the flying or even gliding animals start out fairly small,” Kammerer says. It’s even possible that downsizing was related to the emergence of feathers and similar fuzzy coverings, he adds. Small animals lose heat quickly, and these fuzzy coverings may have first evolved to insulate early ornithodirans such as Kongonaphon.

“Some sort of shaggy covering becomes a necessary way to survive while also being able to take advantage of the ecological benefits of being a small animal,” Kammerer says.