These photos have everything: supernovas, non-thermal filaments, and a massive black hole. 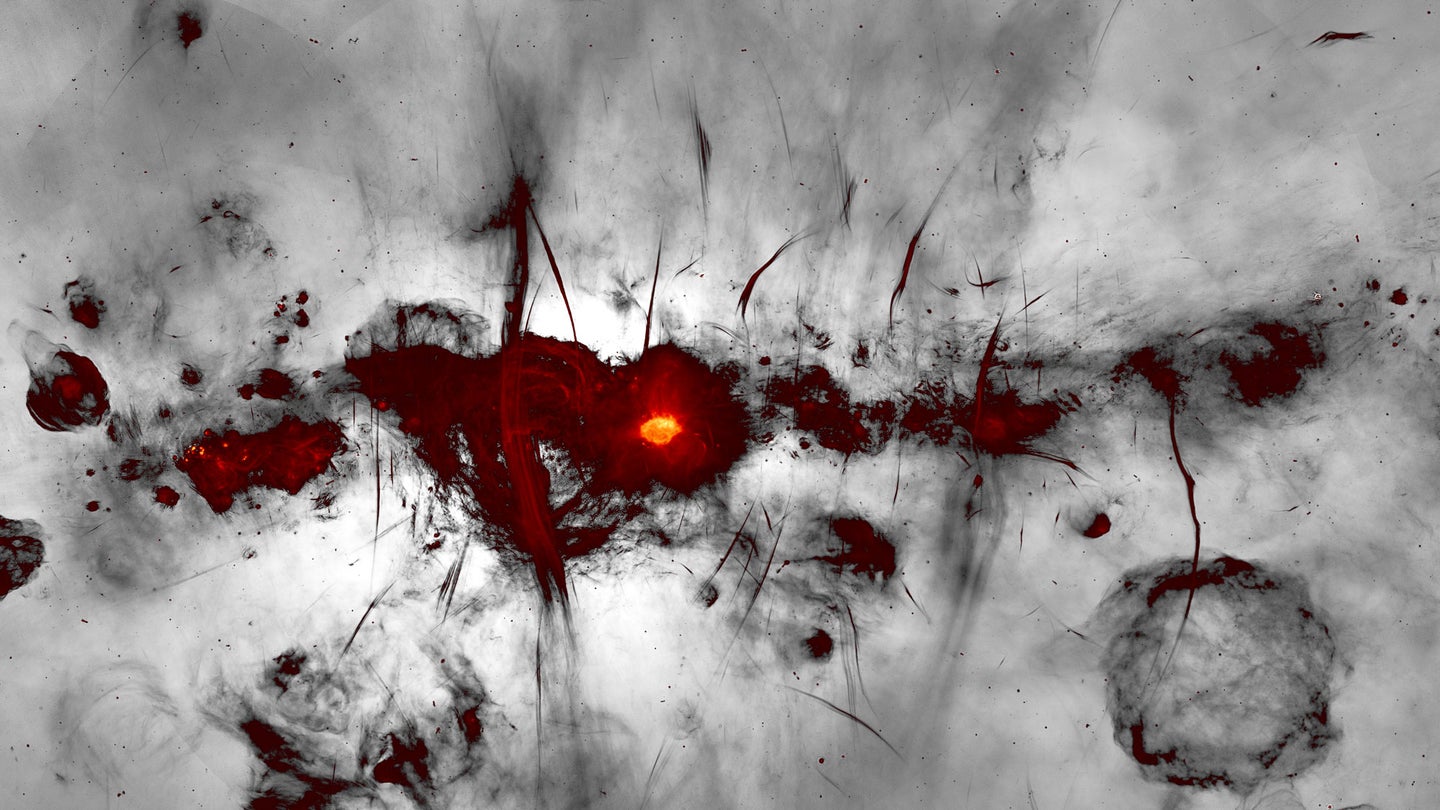 The new radio telescope image shows the Milky Way in red with the black hole in yellow. I. Heywood, SARAO
SHARE

We now have a better window than ever into the center of our galaxy, the Milky Way, and it’s filled with exploded stars, magnetic streaks, and a giant black hole.

On January 26, the South African Radio Astronomy Observatory (SARAO) released images of the heart of the Milky Way taken using its radio telescope, MeerKAT. MeerKAT captures radio waves using 64 antennae spread over almost five miles, and it’s the most sensitive telescope of its kind. A radio telescope like MeerKAT was necessary to take these images because only radio waves can penetrate through the dust between Earth and the center of our galaxy.

The blood-red, horizontal splotches show the Milky Way in radio waves, as observed by MeerKAT. The bright yellow spot in the middle is the black hole that sits at the center of our galaxy. That brightness represents a high concentration of radio emissions from material spiraling into the black hole, says Fernando Camilo, the chief scientist at SARAO. Until very recently, scientists weren’t certain about the existence of black holes. Now they are well-known for sucking up everything in their path, and researchers also recently discovered black holes can create new stars.

The Jackson-Pollock-like red streaks are non-thermal filaments (NTFs), magnetized strands that can’t be found anywhere else in the galaxy. Camilo says researchers previously knew of maybe up to 100 NTFs, but with the new MeerKAT images, they now know of over a thousand.

“You would study each of them as like a curiosity,” Camilo says. ”Now…you can start studying them as a population.”

The above image zooms into the Eye-of-Mordor-like black hole. It’s the same black hole seen in the top image, except rotated to the right. Some astrophysicists use the term “super bubble” to describe the swirling, spherical shape to the upper left of the black hole. It might be due to many stars blowing up in “rapid succession”—in galactic terms, meaning within a few million years— which inflates this large bubble, says Camilo.

The center of this image shows a supernova remnant or remains of an exploded star. The vivid bolt in the upper right is an NTF called “the Snake.” The bright dot streaking to the left of the remnant is known as the “Mouse nebula” because of its rodent-like resemblance. The pointy nose is a pulsar, a highly magnetized, rotating collapsed core of a massive star, which Camilo first detected in 2002. The faint tail of the mouse is due to its supersonic speed.

“This pulsar’s moving a few 100 kilometers per second, which is more than the local sound speed, [so] it leaves behind a trailing wake like a boat,” Camilo says.

The researchers also photographed a never-before-seen supernova remnant, several light-years in diameter. Usually, the contour of a supernova remnant is distorted as it expands into space, so Camilo says this one is rare for its almost-perfect spherical shape. The bright white dots speckled about could be supermassive black holes in galaxies far away, according to SARAO.

“It’s not a coincidence that these types of structures [aren’t] anywhere else in the galaxy. So obviously it has to do something somehow with that black hole,” Camilo says. “That’s what the astronomers hope to learn from better images like this.”

Correction (February 3, 2022): An earlier version of this story misspelled artist Jackson Pollock’s name. It has since been updated and we regret the error.