As black as day. 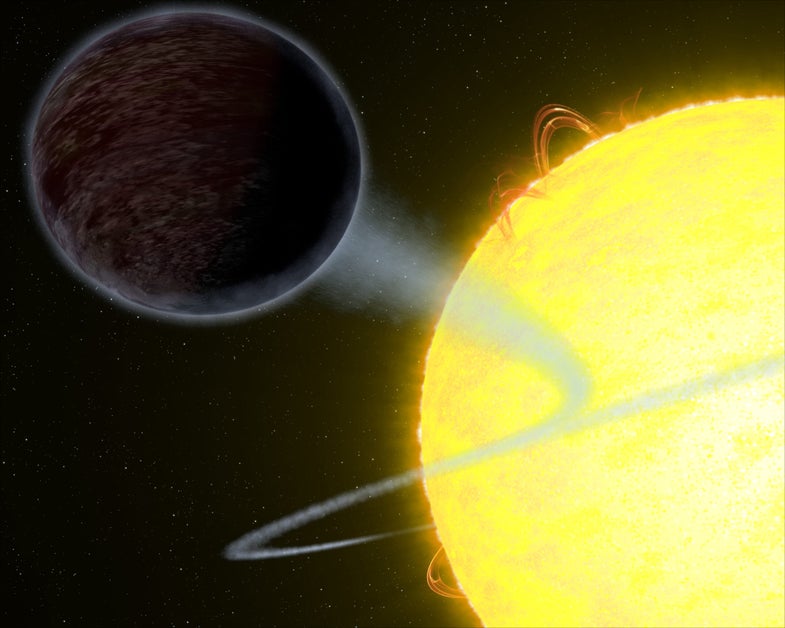 This illustration shows one of the darkest known exoplanets - an alien world as black as fresh asphalt - orbiting a star like our Sun. The day side of the planet, called WASP-12b, eats light rather than reflects it into space. The exoplanet, which is twice the size of Jupiter, has the unique capability to trap at least 94 percent of the visible starlight falling into its atmosphere. The temperature of the atmosphere is a seething 4,600 degrees Fahrenheit, which is as hot as a small star.The day side hordes all the visible light because it always faces its star. The planet orbits so close to its host that it has fixed day and night sides. WASP-12b is about 2 million miles away from its star and completes an orbit once a day. The night side is much cooler, with temperatures roughly 2,200 degrees Fahrenheit, which allows water vapor and clouds to form. A swirl of material from the planet's super-heated atmosphere is spilling onto its star.This oddball exoplanet is one of a class of so-called "hot Jupiters" that orbit very close to their host star and are heated to enormous temperatures. Space Telescope Science Institute Office of Public Outreach
SHARE

We have discovered a planet. It gathers in light from its sun, and refuses to let go. In return, the star strips away the planet’s atmosphere, slowly devouring it.

That’s how the popular planet-inventing Twitter bot Newfound Planets , might describe this particular gaseous giant, smashing together verbs and adjectives into a delicious galactic treat that has to be too good to be true.

But this is entirely real. WASP-12b is a burning monster of a world, a ‘Hot Jupiter’ orbiting a star 1400 light-years away. Scientists first discovered the planet back in 2008, but recent observations made with the Hubble Space Telescope show that the planet is very unusual (even amid its fellow extrasolar worlds with glowing atmospheres, scorching temperatures, or ruby-adorned clouds.

In a study published last week in The Astrophysical Journal, researchers found that WASP-12b is far darker than previous glances through ground-based telescopes had implied. This is the first time scientists have been able to quantify its darkness.

Usually, planets of that size and type reflect back about forty percent of the light they receive from the star they orbit. But this planet absorbs about 94 percent of that glare.

What’s even more unique is the distance that light has to travel. WASP-12b is massive, but it orbits at a range of just 2 million miles from its sun. By comparison, Earth, which is much smaller, orbits our Sun at a gap of almost 93 million miles. This relatively short travel time means that the planet completes an orbit of the sun in about 24 hours. In other words, it’s year is our day. The planet is also tidally locked to it’s star, with one side constantly illuminated, and one trapped in an endless night.

The proximity also means that the planet’s day side gets extremely hot—over 4,600 degrees Fahrenheit. That’s so hot that bright, reflective clouds can’t form in the sky, leaving almost nothing to reflect light away from the planet’s surface. Some clouds can form in the much cooler evening side, but since they face away from the sun, they aren’t sending back much light either.

The lack of reflectivity means that the planet converts all its light to heat, maintaining a steady, searing hot temperature. It also makes the planet appears pitch-black to observers. But the star isn’t letting the planet steal its light without a fight. Instead, it’s siphoning off bits of the planet’s atmosphere and pulling the gasses into itself.

While this is an extremely hot find, it’s not the first dark planet that scientists have discovered, or even the darkest. Back in 2011, researchers discovered that another hot gas giant—TrEs 2b—had a surface blacker than coal or acrylic paint absorbing almost all light that reached it. But, unlike WASP-12b, we’re still not exactly sure what makes this particular planet so inky. Future research will have to enlighten this dark mystery.