To set the record straight: Nothing can break the speed of light

Objects may not be as fast as they appear with this universal illusion. 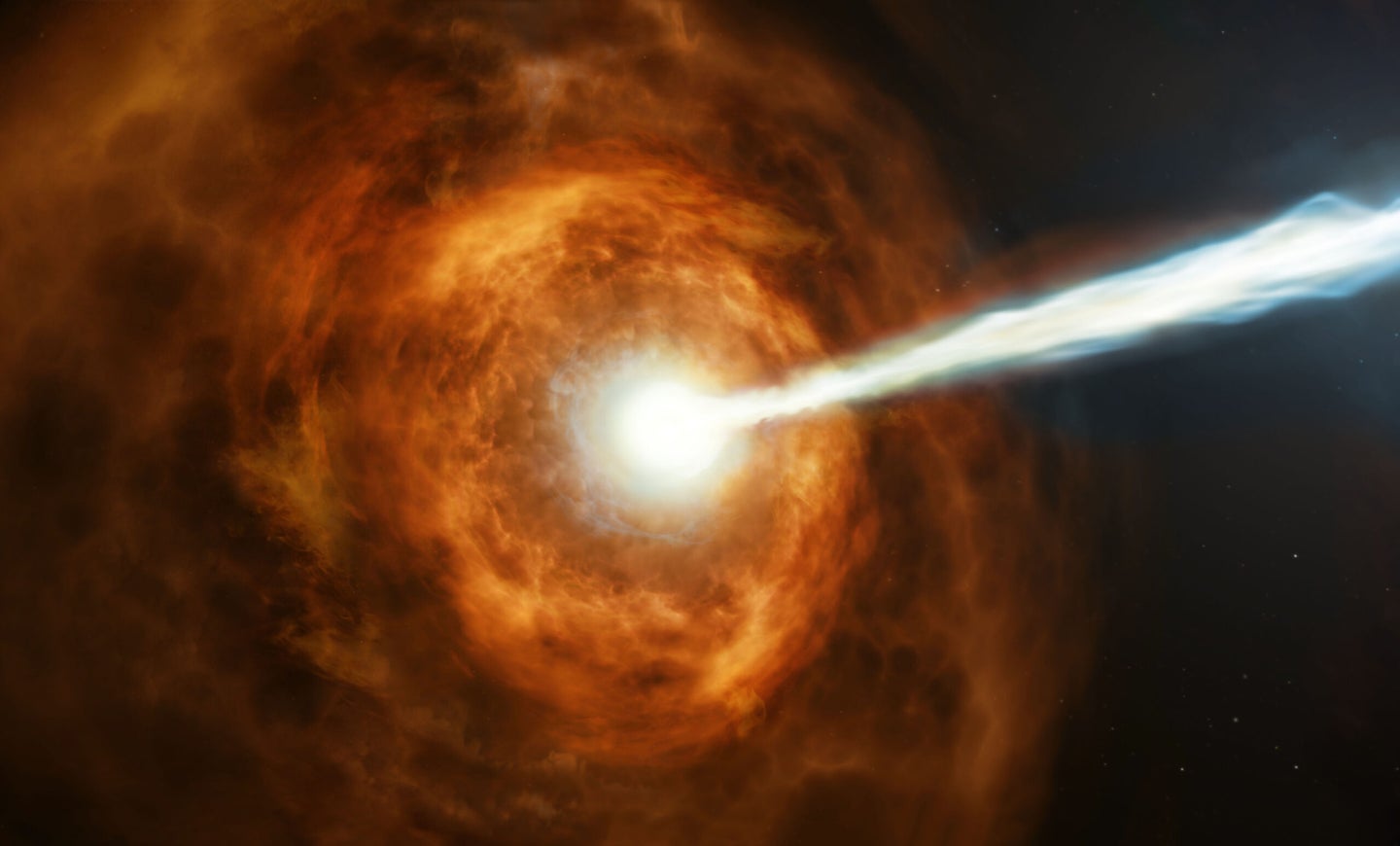 Gamma-ray bursts (like the one in this illustration) from distant exploding galaxies transmit more powerful light than the visible wavelengths we see. But that doesn't mean they're faster. NASA, ESA and M. Kornmesser
SHARE

Back in 2018, astronomers examining the ruins of two collided neutron stars in Hubble Space Telescope images noticed something peculiar: a stream of bright high-energy ions, jetting away from the merger in Earth’s direction at seven times the speed of light.

That didn’t seem right, so the team recalculated with observations from a different radio telescope. In those observations, the stream was flying past at only four times the speed of light.

That still didn’t seem right. Nothing in the universe can go faster than the speed of light. As it happens, it was an illusion, a study published in the journal Nature explained earlier this month.

[Related: Have we been measuring gravity wrong this whole time?]

The phenomenon that makes particles in space appear to travel faster than light is called superluminal motion. The phrase fits the illusion: It means “more than light,” but actually describes a trick where an object moving toward you appears much faster than its actual speed. There are high-energy streams out in space there that can pretend to move faster than light—today, astronomers are seeing a growing number of them.

“They look like they’re moving across the sky, crazy fast, but it’s just that they’re moving toward you and across the sky at the same time,” says Jay Anderson, an astronomer at the Space Telescope Science Institute in Maryland who has worked extensively with Hubble and helped author the Nature paper.

To get their jet’s true speed, Anderson and his collaborates compared Hubble and radio telescope observations. Ultimately, they estimated that the jet was zooming directly at Earth at around 99.95 percent the speed of light. That’s very close to the speed of light, but not quite faster than it.

Indeed, to our knowledge so far, nothing on or off our planet can travel faster than the speed of light. This has been proven time and time again through the laws of special relativity, put on paper by Albert Einstein a century ago. Light, which moves at about 670 million miles per hour, is the ultimate cosmic speed limit. Not only that, special relativity holds that the speed of light is a constant no matter who or what is observing it.

But special relativity doesn’t limit things from traveling super close to the speed of light (cosmic rays and the particles from solar flares are some examples). That’s where superluminal motion kicks in. As something moves toward you, the distance that its light and image needs to reach you decreases. In everyday life, that’s not really a factor: Even seemingly speedy things, like a plane moving through the sky above you, don’t move anywhere near the speed of light.

[Related: Check out the latest version of Boom’s supersonic plane]

But when something is moving at high speeds at hundreds of millions of miles per hour in the proper direction, the distance between the object and the perceiver (whether it be a person or a camera lens) drops very quickly. This gives the illusion that something is approaching more rapidly than it actually is. Neither our eyes nor our telescopes can tell the difference, which means astronomers have to calculate an object’s actual speed from data collected in images.

The researchers behind the new Nature paper weren’t the first to grapple with superluminal motion. In fact, they’re more than a century late. In 1901, astronomers scanning the night sky caught a glimpse of a nova in the direction of the constellation Perseus. It was the remnants of a white dwarf that ate the outer shells of a nearby gas giant, briefly lighting up bright enough to see with the naked eye. Astronomers caught a bubble inflating from the nova at breakneck speed. But because there was no theory of general relativity at the time, the event quickly faded from memory.

The phenomenon gained buzz again by the 1970s and 1980s. By then, astronomers were finding all sorts of odd high-energy objects in distant corners of the universe: quasars and active galaxies, all of which could shoot out jets of material. Most of the time, these objects were powered by black holes that spewed out high-energy jets almost moving at the speed of the light. Depending on the mass and strength of the black hole they come from, they could stretch for thousands, hundreds of thousands, or even millions of light-years to reach Earth.

Around the same time, scientists studying radio waves began seeing enough faux-speeders to raise alarms. They even found a jet from one distant galaxy that appeared to be racing at nearly 10 times the speed of light. The observations garnered a fair amount of alarm among astronomers, though by then the mechanisms were well-understood.

In the decades since, observations of superluminal motion have added up. Astronomers are seeing an ever-increasing number of jets through telescopes, particularly ones that are floating through space like Hubble or the James Webb Space Telescope. When light doesn’t have to pass through Earth’s atmosphere, their captures can be much higher in resolution. This helps teams find more jets that are farther away (such as from ancient, distant galaxies), and it helps them view closer jets in more detail. “Things stand out much better in Hubble images than they do in ground-based images,” says Anderson.

[Related: This image wiggles when you scroll—or does it?]

Take, for instance, the distant galaxy M87, whose gargantuan central black hole launched a jet that apparently clocked in at between 4 and 6 times the speed of light. By the 1990s, Hubble could actually peer into the stream of energy and reveal that parts it were traveling at different speeds. “You could actually see features in the jet moving, and you could measure the locations of those features,” Anderson explains.

There are good reasons for astronomers to be interested in such breakneck jets, especially now. In the case of the smashing neutron stars from the Nature study, the crash caused a gamma-ray burst, a type of high-energy explosion that remains poorly understood. The event also stirred up a storm of gravitational waves, causing rippled in space-time that researchers can now pick up and observe. But until they uncover some strange new physics in the matter flying through space, the speed of light remains the hard limit.