When the stars align, you can zoom way in. 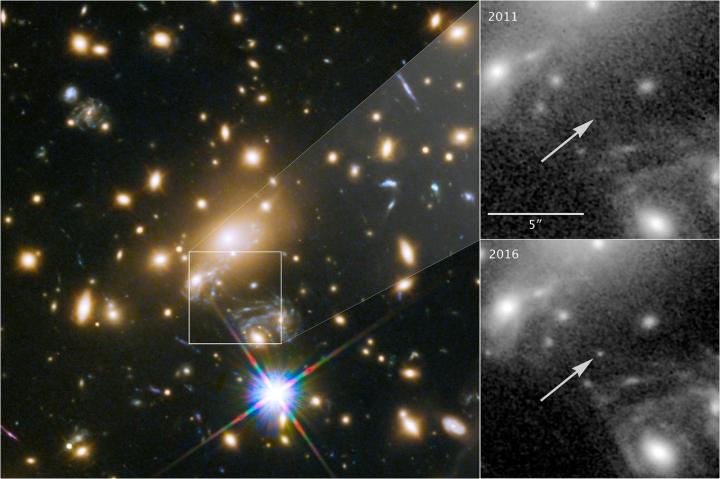 When looking back into the deep recesses of the universe, even huge objects like planets, stars, and galaxies can appear small. Magnification can help, but where do you find a magnifying glass large enough to spot stars billions of light years away?

Answer: you don’t. You have to look well beyond Earth to get a visual assist that will let you check out those distant marvels. Gravitational lensing occurs when the gravity around a particularly massive object (say, a galaxy) actually bends light passing by. That alteration can magnify fainter light sources, making them more visible as they travel toward Earth. It’s helped us image distant supernovas and given us insights into dark matter.

In the first study, researchers spotted a twinkling light that abruptly brightened when they were trying to study a distant supernova in the same part of the sky. They looked closer and found that the sudden illumination was likely caused by gravitational lensing of a star that existed just 4.4 billion years after the big bang. That’s an extremely long time ago, and because of the immense distance, the star itself was remarkably faint.

“You can see individual galaxies out there, but this star is at least 100 times farther away than the next individual star we can study, except for supernova explosions,” astronomer and lead author Patrick Kelly said in a statement.

The blue giant star is about twice as hot as the Sun and was only visible because all the stars aligned. No, really. This star’s light was already magnified about 600 times by a cluster galaxy positioned between the star and the Hubble telescope. But when a star about the size of our sun within that galaxy passed between the object and Hubble, the magnification skyrocketed. It now appeared 2000 times brighter than it normally would, a phenomenon known as microlensing. The astronomers nicknamed the early star Icarus.

In the second paper published in Nature Astronomy, researchers observed two flashes of light lensed by a similarly massive galaxy. They were bright and brief, but didn’t really fit the profile of a supernova. These were both faster and fainter than that. But they also were much brighter than the recurrent explosions of a nova. Astronomer Steven Rodney and co-authors propose a few explanations for the unusual event. It could be recurring explosions of a larger star, or just a really bright nova, but it could also be two different microlensing events of the same star system, similar to the event noticed by Kelly.

Either way, the zoomed-in view of the distant spots in the universe are thrilling to the astronomy world. In an accompanying perspective, astronomer Rosanne Di Stefano writes:

As we inch toward the oft-delayed launch of the James Webb Space Telescope, and the first light of ground-based sky surveys like those that will be hosted at the Large Synoptic Survey Telescope, our view of the sky will grow wider. But we’ll still need that gravitational assist to see some of those exciting events of the early universe, and researchers will look to gravitational lensing to help bring those distant parts of the cosmos closer to our frail, expanding vision.