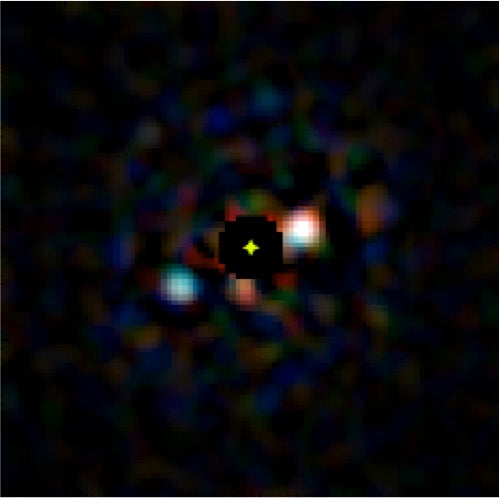 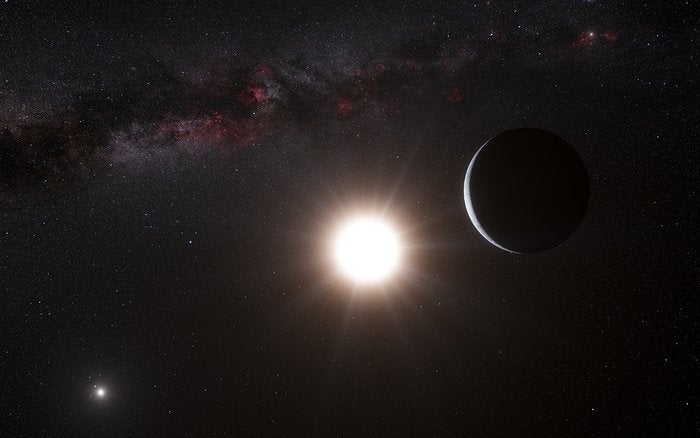 An artist’s rendering of a planet around Alpha Centauri

A new mission, announced today, aims to take a picture of the Alpha Centauri system, which houses the two closest sun-like stars to our solar system.

This telescope will be looking to take the first ever optical image of a potentially habitable exoplanet, and the team hopes that the results will show a ‘pale blue dot’ similar to the famous photo of Earth taken by the Voyager probe.

Named Project Blue, the privately funded mission aims to launch the telescope into orbit in just a few years–a tiny amount of time in terms of space telescopes.

The Project Blue team includes an all-star lineup of scientists. One of the leaders of Project Blue is the current CEO of the BoldlyGo Institute, Jon Morse, who was formerly the director of astrophysics at NASA. Other universities and groups have also joined the mission, including University of Massachusetts at Lowell, the SETI Institute, and others.

A rendering of the telescope.

“We believe that this is something we can do with private funding, and we’re out to do that as soon as possible,” Morse tells Popular Science.

“It’s pretty ambitious,” says Steve Howell, a member of NASA’s Kepler science team, and who is not involved with Project Blue. “But that’s ok, we should do ambitious things.”

In part, Alpha Centauri was chosen because it is located so close to our own Solar System. The idea of a habitable planet next door is appealing. Although scientists don’t yet know whether Alpha Centauri has any planets, data from the Kepler telescope suggest that every star in the Milky Way has at least one planet orbiting it, on average.

The stars of the Alpha Centauri system also offer a unique opportunity because of their size. If there is a rocky planet in orbit around either of the stars, the habitable zone will be far enough away from the star that a telescope could theoretically separate out the light reflected from the planet from the light of the star it’s orbiting.

That would be much more difficult if the planet was further away, or if the star was smaller, like Proxima Centauri, another star very close to our sun that we now know has an Earth-sized planet in its habitable zone. Proxima Centauri isn’t as good of a candidate, the researchers say, in part because the planet and the star are just too close together.

Plus, “the fact that you do have two stars [at Alpha Centauri], it’s like two coin flips,” Morse says. “There’s four possible outcomes and only one of them is nothing, so we’re hoping that at least one of the stars will have terrestrial planets around it, and possibly both, which would be an amazing discovery.”

How It Will Work

“If you look at our Earth from some other stellar system, you would find that the Earth is 1 billion to 10 billion times dimmer in the visible light spectrum than our own sun,” Supriya Chakrabarti, says a physicist from University of Massachusetts at Lowell who is working on Project Blue. That makes identifying and photographing a planet like Earth from a large distance incredibly difficult. Project Blue plans to use a coronagraph to try to make out the dim planet that the team hopes is in orbit around one of the stars.

The idea of a coronagraph has been around for a long time. As the name suggests, it was once used to examine the Sun’s corona, by blocking out light from the rest of the sun. Now, researchers from around the world are looking to repurpose that technology to block out the light from more distant stars, allowing them to see things like planets that might normally be drowned out by the brightness of their suns.

The scientists will also have to build an instrument that can focus in on the star for long periods of time without wobbling at all.

“It’s like making sure your hands don’t shake as you’re taking a picture,” Chakrabarti says.

The fine-tuned focusing capabilities and the coronagraph, as well as a deformable mirror that can help the image come into focus, are well on their way to development in labs around the world, but they need to be combined and launched for this mission to work.

Chakrabarti has already tested those three aspects of the telescope (which will have an 18-inch mirror) on some short-term rocket experiments. The next step will be to launch prototypes of the telescope’s technology into weather balloons to see how well the components function in a near-space environment.

Then, the plan is to assemble the telescope and send it into low Earth orbit on a commercial rocket, similar to existing satellites. Neither a spacecraft nor a launch company has been decided for this project, but Project Blue hopes to have a system ready for launch in about three years, which will then operate for two years taking pictures of the Alpha Centauri system, looking for a planet.

The final cost is still being ironed out, but Morse estimates that it will be in the tens of millions of dollars. Not a small chunk of change, but nowhere near the billions needed to build more generalized space telescopes like the Hubble. The goal is to build the telescope for around $50 million or, hopefully, much less.

“If you build something that is very specific for a single goal, then it’s a lot easier than building something that has a larger goal of doing general science, or looking at many stars,” Howell says. “In principle I think this could be easily done. Well, maybe not easily. But it could be done.”

Project Blue isn’t the only project working to image exoplanets. NASA’s Wide Field Infrared Survey Telescope (WFIRST) should have the capability to image exoplanets, but that successor to the Hubble and the yet-to-be-launched James Webb Space Telescope isn’t slated to launch until the 2020’s.

Other plans are even more distant and expensive. NASA’s proposed EXO-C project, which would also look at exoplanets, would cost about $1 billion, and currently would only get a chance to fly if WFIRST does not move forward.

Private ventures are also turning their eyes toward Alpha Centauri. Yuri Milner’s Breakthrough: StarShot would send thousands of tiny probes speeding towards Alpha Centauri to take close-up pictures and measurements of the system. But the project would take years to build and launch, about 20 years (optimistically) to travel to the Alpha Centauri, and would cost more than $100 million.

Project Blue aims to be the least expensive and most efficient way to take a direct image of a potentially Earth-like planet in the Alpha Centauri system.

But Earth-like can mean many things, and while it would be great to find Earth’s exact twin, in a universe as vast as ours, there is some room for leeway. What they hope to see is a planet that is about one half to one and a half times the size of Earth, large enough to hold onto an atmosphere, but not so large that gravity becomes unbearable. They’d like it to orbit the star in the habitable zone, where liquid water could exist on the surface.

Morse says that liquid water in abundance would be one of the key features that they are looking for in a planet. If they find a planet that has a blue tinge that would indicate liquid water, they’d also be on the lookout for clouds and a relatively mild greenhouse gas effect (think Earth, not Venus).

Finding Earth’s twin so close by would be exciting, but don’t expect high levels of detail even if the group is successful. The resulting image is likely to be a small dot, but it’s a dot that can lead to much larger things.

“If we discover a pale blue dot around one of the Alpha Centauri stars, the urgency to build larger facilities, to do more characterization of that and eventually hope to see weather patterns or mountain ranges or continents, we’ll see a lot more interest in doing that kind of thing,” Morse said. “That’s the impact that we want this to have.”

Correction 10/11/2016 at 2:35pm Eastern: An earlier version of this article stated that Project Blue’s telescope would take the first optical image of any exoplanet. In fact, other telescopes have captured images of exoplanets, but Project Blue aims to take the first snapshot of a potentially habitable exoplanet. The article has been updated to fix this misunderstanding.