Tomorrow's historical astronomical event is not just a beautiful novelty 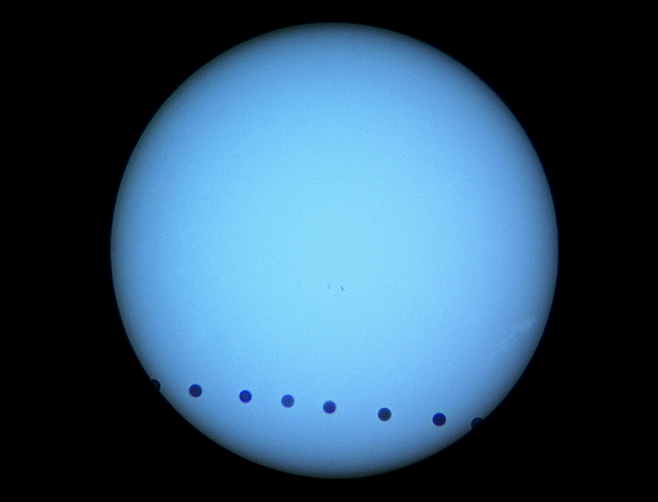 Tomorrow, skywatchers the world over will look up to behold a strange sight witnessed just seven times in the past five centuries. The last transit of Venus until 2117 is an occasion for astronomical celebration and historic import — we’ll be watching something the greatest astronomers of any age have traveled the world to see.

But this time, the black dot of Venus blotting out part of the sun means more than the astronomers of old could have hoped to know. This is a phenomenon that happens all the time in our galaxy; thousands, perhaps millions, of exo-transits are helping astronomers find planets around other stars. Watching Venus do it one more time will help fine-tune the hunt for those distant exoplanets.

“The transit of Venus has now been transformed from historical interest to a contemporary object of 21st century science, related to one of the most interesting and important current studies in astronomy, namely that of exoplanets,” said Jay Pasachoff, professor of astronomy at Williams College in Massachusetts. “Johannes Kepler is there at both ends — predicting it in 1631, and then at the current end, of being able to use the transit method to study the transit of Venus and the transits of exoplanets.”

“Caring about Venus is caring about ourselves.”Pasachoff will watch the transit from the summit of Haleakala in Maui, with colleagues staring through telescopes dotted across the United States. They will look through a giant spectrograph to study Venus’ atmosphere, and they will study the polarization of light by that atmosphere to nail down its composition. Observatories across the globe and in space will be focused on the sun and the disk of Venus crossing its northern hemisphere. Even the Hubble Space Telescope will be watching by looking at the moon, because it’s too sensitive to look at the sun directly. (Click here to find out how you can watch it, too.)

What is the transit of Venus, exactly? At most twice in a century, the second planet’s orbit tucks it between the sun and the Earth, rendering it a small dot covering part of the sun. This happens twice in an eight-year span and not again for more than 100 years. After Tuesday, it won’t happen again until 2117.

For the most part, that’s beyond the limit of a human life span — even Halley’s comet with its 76-year period may come twice in a person’s life. But this rare transit is even more special.

Kepler predicted this in 1631, and astronomers in late-Renaissance Europe strained to see it in 1639. The following two centuries saw daring international expeditions to the Earth’s best viewing spots, with astronomers angling to answer a key cosmic question: The distance from the Earth to the sun. Kepler had also figured out the ratios of the planets’ distances from the sun, so if someone could figure out one of the distances, you could determine them all. And even better, this could help with the parallax measurement. By determining the change in a star’s position relative to the Earth, perhaps in two seasons, you can determine how far away it is. But you’ll need the sun-Earth distance as one of the variables.

Best of all is the illuminating view of the transiting planet itself. Astronomers studying Venus would like to determine how its atmosphere grew hot enough to melt lead, Pasachoff explains. A European Space Agency orbiter, Venus Express, is shedding some light on this question, but it can only pass through one part of the atmosphere at a time. The sun will light up the whole thing, a phenomenon Pasachoff first observed during the previous transit, in 2004. 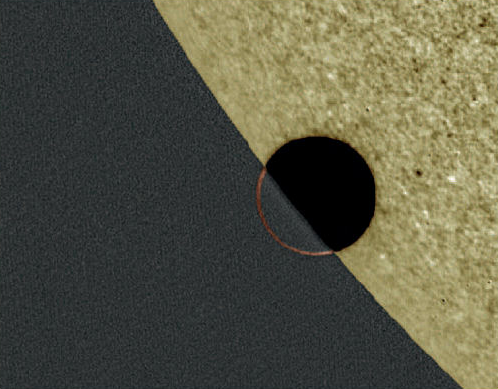 The Arc of Venus

This image of Venus just entering the face of the sun is from NASA’s TRACE satellite during the 2004 transit. The bright rim around Venus’ trailing edge is its atmosphere, backlit by the sun.

When the planet is at the very edge of its transit, its own disk partly in front of the solar disk, refracted sunlight in its atmosphere completes the circle and renders it whole. Astronomers can look at this arc of refracted light to study the planet’s atmosphere — a trick they can use for Venus as well as distant exoplanets. NASA’s Transition Region and Coronal Explorer (TRACE) satellite observed this phenomenon in 2004, and now newer space assets will stare at it with more than double the resolution as last time, Pasachoff said. This phenomenon was originally reported during the previous transit in 1882, but not much was made of it afterward, he said.

Solar astronomers located at the National Solar Observatory’s Sacramento Peak, N.M. facility will be watching through a specially purchased spectrograph and imaging spectrometers. A carbon dioxide spectrograph is not a typical tool in a solar scientist’s arsenal, so the American Astronomical Society and the National Geographic Society provided a grant, Pasachoff said. “Then they can put that filter aside for 105 years, until it becomes useful again,” he said.

Studying Venus’ atmosphere will help answer some questions about how it became so different from Earth, despite the two planets’ numerous similarities. Venus’s atmosphere is almost 100 times more massive than Earth’s and consists mainly of CO2, said planetary scientist Thomas Widemann of the Observatoire de Paris. No one knows why, he explains in a NASA news story. “Our models and tools cannot fully explain Venus, which means we lack the tools for understanding our own planet,” he said. “Caring about Venus is caring about ourselves.”

The atmospheric refraction is also another interesting connection from the past to the present — to better understand what our forebears saw the last time Venus moved across the sun, astronomers at locations like Mount Wilson in California will be watching through antique telescopes.

“There are some serious questions in interpretations of the 18th century observations that might be resolved,” Pasachoff said. “We will better understand what could have been seen.” 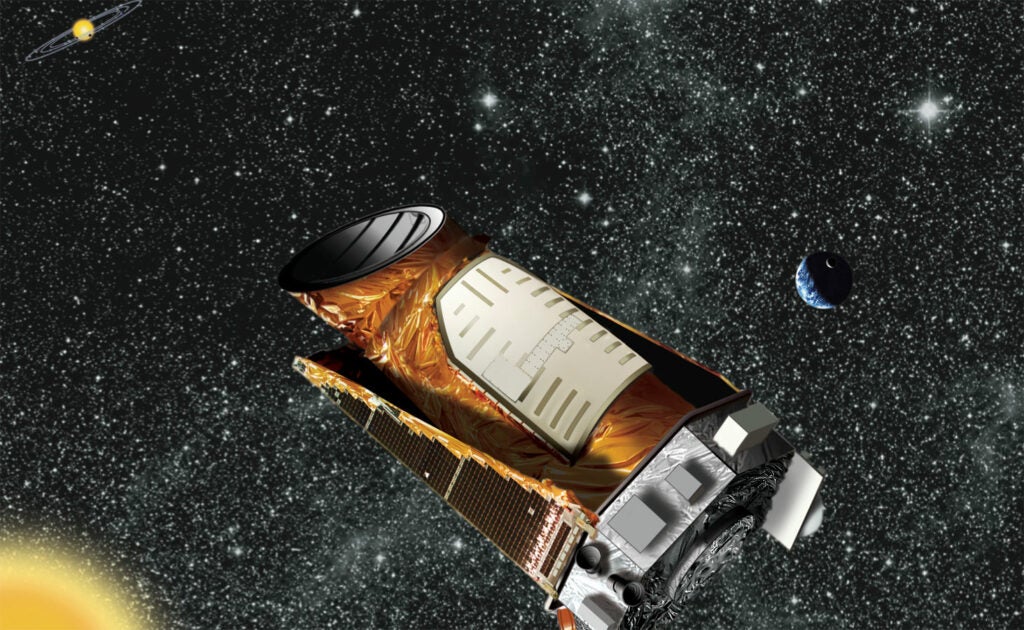 An artist’s rendition of the Kepler space telescope, seen from its outpost in deep space.

These questions will also bear on the Kepler Space Telescope and its detection of exoplanets using the transit method. Just as the 18th century transit established a baseline for measuring our solar system, this new transit will establish a baseline for measuring new star systems. Kepler watches for blips in brightness as planets move across the faces of their stars. We know a lot about Venus already, and we’ll know a lot more about its atmosphere after this transit — and we know a lot about the sun, and its current cycle of increased activity (which makes our normally quiescent star a better proxy for others). So astronomers will be able to establish a baseline for blips in brightness that can help improve Kepler’s measurements.

“When we know exactly what Venus and its atmosphere is like and what sunspots and limbs are arcing around the sun, that will allow us to better understand the exoplanet transits, in which we see only a blur of light, without being able to pick the exoplanet and its parent star apart,” Pasachoff explained.

So to modern astronomers, planetary transits are now in the realm of the nebulae, an idea none of the previous Venus transit-watchers could ever have conceived. Pasachoff said he, too, can’t imagine what his successors will look for in his notes, or how they’ll use the 2117 transit.

“I feel a responsibility for helping to provide as many sites for observation of this transit as possible. We don’t know, now at the beginning to the 21st century, what data might be useful over the long term, for astronomers of the 22nd century,” he said. “All I can do is to try to do the best that I can now, to get the most complete possible set of observations using contemporary capabilities. But there certainly is extra pressure in knowing that this is our last chance.” 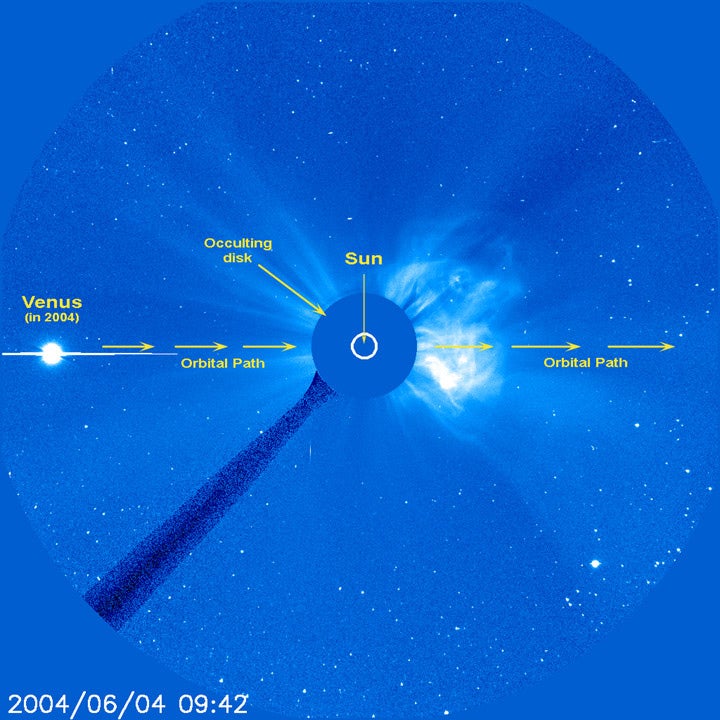 The path that Venus will take as it approaches the Sun in SOHO’s field of view. The image is from the 2004 transit, but a similar path will be taken during the transit of 2012.
Deep Space
Exoplanets
Space
Space Telescope