A frozen super-Earth is just six light years away

It's close, but you won't want to visit. 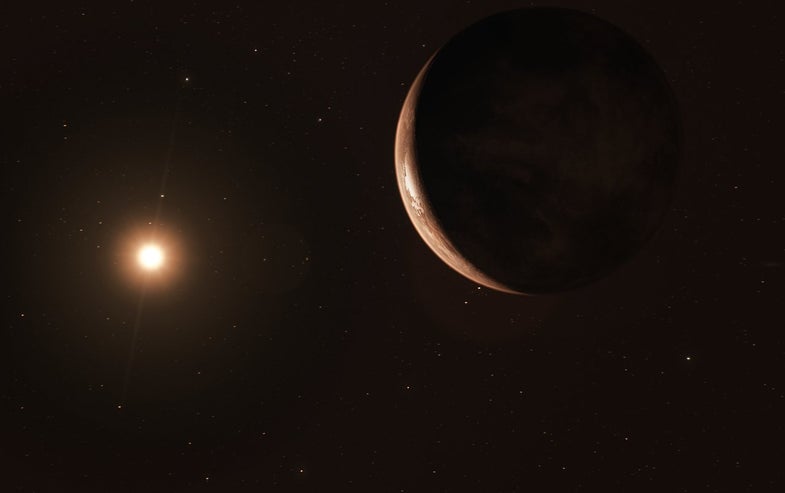 As of November 8, humanity has confirmed the existence of 3,837 exoplanets—quite an extraordinary feat, considering that before this decade the number was less than 500. Most, unfortunately, are hundreds or even thousands of light-years away, and it’s highly unlikely we’ll be able to study these worlds directly any time soon. But a handful are a little closer to home—including a frozen super-Earth just six light-years away, recently found thanks to a new technique for tracking and identifying exoplanets close to our neighborhood.

In a paper published in Nature on Wednesday, an international team of astronomers report finding a new exoplanet orbiting Barnard’s star, the second closest neighboring star system to Earth (after Alpha Centauri’s triple star system), and long thought to be devoid of any planets of its own. Named Barnard’s star b (or GJ 699 b), the planet is a hefty 3.2-times the Earth’s mass, with a 233-day orbit around the star itself.

It’s also a freezing hellscape, sitting far from its host star and removed from any decent chance to collect meaningful rays. The authors of the paper suspect temperatures average out to an ungodly -238 degrees Fahrenheit. That’s more than 100 degrees colder than the most frigid reading ever taken on Earth.

“I think it is a stretch to call this planet potentially habitable,” says Johanna Teske, a researcher at the Carnegie Institution for Science in Washington, D.C., and a co-author of the new paper. “It is too cold to have liquid water on the surface, which is basically the definition of the habitable zone,” the orbital region around a star where temperatures would be moderate enough for liquid water to exist. Liquid water is generally considered a crucial component in the evolution of life, or at least life as we know it.

That’s a bit of a downer, but it doesn’t sully the importance of Barnard’s star b’s discovery, which has been quite a few years in the making.

“There was a hint of a signal in the data prior to 2015, at which point more intensive observing campaigns were initiated to confirm the signal,” says Teske. A major push to finally resolve what these signals were coming from the detection of Proxima b, the closest exoplanet to Earth and one that might actually be habitable to life, even if those chances have slimmed in recent years. “Based on results from the Kepler mission, we know think many stars probably host small planets. So, why not look at the nearest stars?”

Paul Butler, another Carnegie institute researcher who worked on the investigation, calls Barnard’s star the “great white whale” of planet hunting. “For most of the past 100 years, the only technique by which astronomers could look for extrasolar planets was the astrometric technique,” in which researchers look for the host star to wobble in the plane of the sky relative to background stars. The new study moves beyond the limits of astrometric techniques and provides a glimpse into how exoplanet hunters might find more Earth-like worlds moving forward.

The investigation of Barnard’s star b was dampened by a few challenges, namely the planet’s long orbital period (which made it harder to study based on stellar transition), and small amplitude of the object’s signal. The team needed to amass a large amount of data in order to isolate the signal and study it, and ended up pouring over 20 years of data collected by seven different instruments. Altogether, it’s one of the largest datasets ever used to find an exoplanet, and part of the reason the team is more than 99 perfect confident Barnard’s star b is a planet. “The truly impressive part of this study is the amount and high quality of the data,” says Teske.

They found Barnard’s star b using what’s called the radial velocity technique, which detects and analyzes wobbles created by gravitational forces acting between star and planet during their orbital dance. Although this technique has been used plenty of times before to find hundreds of other exoplanets, it’s never before been used to find one so small and distant from its star.

What about the planet itself? Unfortunately, there’s still not a whole lot we really know about Barnard’s star b, besides the fact that it exists. “We don’t know whether Barnard’s star b has an atmosphere or even its average composition,” says Teske. And its distance from its host star makes it unlikely it could support life—at least life as we know it.

Still, that mystery goes both ways and could be reason to hold out onto a tiny bit of extraterrestrial hope. “It could be possible that the surface is a bit warmer and could host liquid forms of some molecules, maybe like methane,” says Teske. “And we know of moons in our solar system that are covered in a thick layer of ice but have liquid oceans underneath,” like Europa and Enceladus. Barnard’s star itself is an old red dwarf and not very active, with means there wouldn’t be much concern that it would be inundating any nearby planets with too much stellar radiation. And although it’s a super-Earth, it’s still in the range of planetary masses we think could support life. It’s all speculative, but the prospects of habitability on Barnard’s star b aren’t totally diminished.

Teske, Butler, and others will continue to study Barnard’s star b, and are particularly interested in using the new exoplanet as a target to test out next-generation instruments like NASA’s upcoming James Webb Space Telescope, which could actually assess whether there’s an atmosphere present or not. “Those types of observations are years down the line,” says Teske. “But personally, I’m still an ‘early career’ astronomer. I can be patient.”