The aircraft, called Overture, could someday carry passengers at a speed of Mach 1.7. 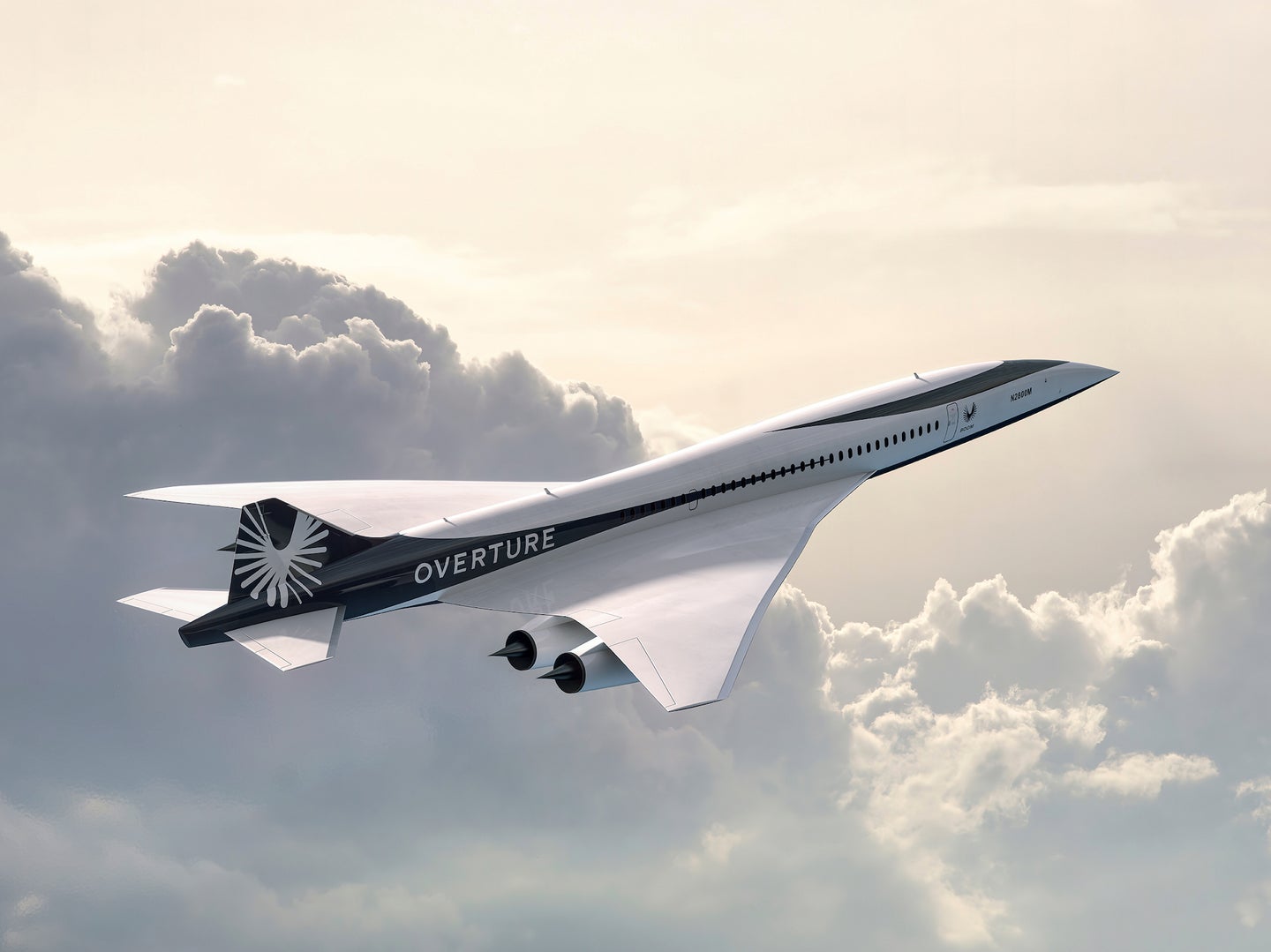 The latest design for the Overture aircraft. Boom Supersonic
SHARE

Modern commercial airliners transport their passengers from point to point with great speed, but they don’t break Mach 1—the rate at which sound travels. Following the fall of Concorde, which ceased its supersonic flights in 2003, a company called Boom Supersonic is trying to change that paradigm. They’ve been working on bringing a new supersonic passenger airplane to market, and making headlines, for years. Today, at the Farnborough International Airshow in England, they revealed a new design for their future plane.

The airliner, which has not yet flown, is called Overture. The 201-foot craft aims to travel at Mach 1.7 and carry as many as 80 people. The new design brings some changes from what the company has previously revealed. The most notable shift is that the aircraft now has four engines under its wings; a previous iteration showed three, with an engine in the tail. Two torpedo-shaped, cylindrical engines now hang under each wing, angled slightly downwards. A reason for the new design is that “using four identical engine installations reduces costs and streamlines maintenance for our customers,” a Boom spokesperson says by email. (Commercial airlines in general have moved away from aircraft designs with four engines, preferring the fuel efficiency that comes with two large engines—but supersonic travel is in its own category.)

Airplanes of all sorts need wings to generate lift, and the latest version of Overture reveals that the company is going with a gull-wing shape for those critical components; the wings sweep back in a rough delta shape and have undulations to them, arcing upwards somewhat over the spot where the two engines are mounted. In a press release, the company says the new design will make the aircraft more stable and safe, and that the wings are “sculpted to enhance supersonic performance as well as improve subsonic and transonic handling.”

The new design also includes a fuselage that slims down towards the rear of the plane, and is larger in diameter at the front, vaguely evoking the bulbous forward section of a Boeing 747. (Indeed, the company’s CEO, Blake Scholl, said, “It’s kind of like if Concorde and 747 had a baby,” according to Flight Global.)

“Boom has applied this design technique to minimize drag and maximize fuel efficiency at supersonic speeds,” the company says in its news release.

Computer simulation time and wind-tunnel testing helped them arrive at this latest design, the company said; they considered 51 different design versions as part of the process of landing on this one. Boom also says that it will make use of carbon composite materials in much of the aircraft’s design.

Earlier this year, Boom announced that it would create a “superfactory” for manufacturing the Overture jets at a facility in Greensboro, North Carolina. Meanwhile, the company has developed, but not yet flown, a smaller aircraft called the XB-1, which is intended to help test for Overture. A Boom spokesperson said that they plan on flying XB-1 this year. The design of the XB-1, with its three engines, mimics an older version of the Overture aircraft’s design, but Boom says that the aircraft is still relevant as a stepping stone for the bigger plane.

“XB-1 has already proven valuable for Overture,” the spokesperson said. “It has informed aircraft development including in giving us valuable, real-world data to strengthen our software-based approach to airplane design. XB-1 has also informed how we think about safety management and how to build a safe, successful flight test program.”

The company also announced a partnership with the US Air Force last year, along with an investment for as much as $60 million. In the same military and governmental vein, part of Boom’s announcement today at Farnborough included that it would be partnering with Northrop Grumman to continue the work of creating Overture-like aircraft that could fly at supersonic speeds for military use. The agreement with Northrop Grumman is “to develop special mission variants for the U.S. Government and its allies.” (The US military already has fighter jets and a bomber, the B-1B, that can break the sound barrier.)

Finally, about those four engines. The company describes them as “medium-bypass 100% SAF-compatible turbofan[s],” referring to SAF, which is sustainable engine fuel. But the final design of the engines remains a wild card. “We have matured the Overture configuration significantly, and we’re working with Rolls-Royce and others behind the scenes to develop multiple design options for an engine that is optimized for 100% sustainable aviation fuel, enabling net-zero carbon supersonic flight for the first time,” a spokesperson said.

Dan Rutherford, the shipping and aviation director of The International Council on Clean Transportation, noted via direct message to PopSci that the engine issue was the key point on his radar: “The only thing you need to know about the new Overture design [is] that it still doesn’t have an engine.”

Boom expects Overture to fly for the first time in 2026. Check out a video showing off the new design, below: