All that glitters is a neutron star collision. 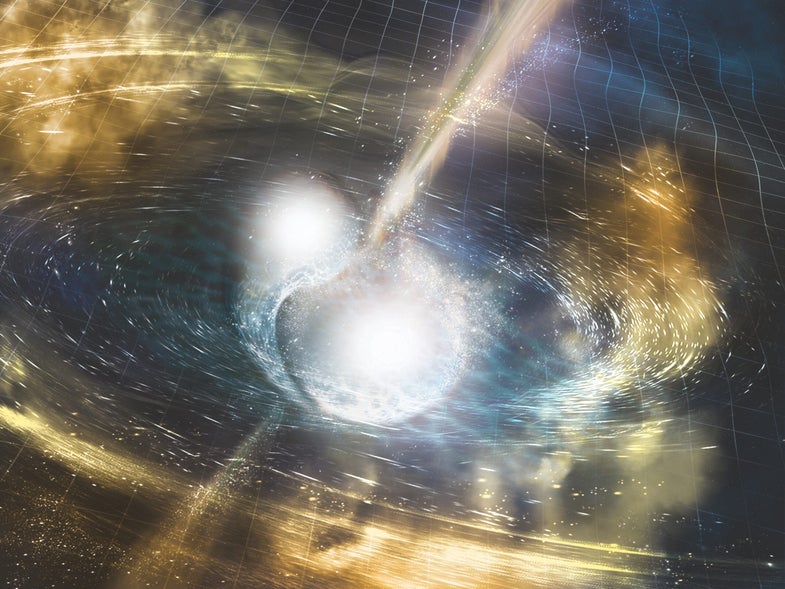 Two city-sized orbs dance through their galaxy. Their dense mass, each equivalent to a star, spins the partners as they get closer and closer together, grazing the outer limits of their other half’s being. For 100 breathless seconds, their pas de deux of anticipation sends gravitational shivers through the universe.

At last, the dancers collide, their cosmic bodies smashing together. A flash of gamma rays, more energetic than any other form of light, zoom out of their union, along with radio waves, x-rays, and infrared beams, letting their merger be known throughout the electromagnetic spectrum.

As they’re spinning closely—and again when they collide—they toss neutrons and protons off into space, squeezing them out in a massive, hot cloud that speeds away to form some of the most coveted materials in the universe.

Or, put another way: “It’s like taking two jelly donuts and slamming them together,” Dan Kasen says. Kasen, a theoretical astrophysicist, was one of the 4,000 scientists who recently announced the observation of two neutron stars merging in visible light, but also with gravitational wave detectors.

This particular observation of a neutron star merger is thrilling because it was the first. But it won’t be the last. While the researchers estimate that neutron star mergers occurs around once every 10,000 years within the Milky Way, the efforts of gravitational wave observatories and telescopes around the world can see much farther, peering into distant galaxies. The hope is that using these techniques, astronomers might be able to track down 3-12 events like this per year, or maybe even more.

Looking at more than one event should open up entirely new avenues of research. Not all neutron stars are the same, and adding more diversity to the mix will give scientists an even clearer idea of what’s going on in our galaxy. “We’ve seen two neutron stars colliding, and we’ve seen two black holes colliding, but what happens when we see a neutron star and a black hole?” Kasen says. “That will be the next question; what’s the range of events, and do they do different things?”

The discovery took months of work by scientists, analyzing results from observatories all over the world. Papers about the event are still being written, but one of the most exciting aspects of the collision—so far—is that it showed us where most of the heavier elements in the Universe come from.

The uranium in nuclear bombs, the rare earth elements in your phone, the lead paint that you had to replace in your house, and yes, the gold that you wear around your neck or on your finger. About half of all of those elements came from the glowing clouds of material flung away by merging neutron stars.

In the second after the neutron stars collided, the neutron-rich soup of particles started mixing and bunching together, forming elements like iron, and then heavier elements still. Meanwhile, the cloud keeps spreading.

“It’s just a low density mushroom cloud of debris flung out at a few tenths of the speed of light. After a day this cloud of debris has spread out over something the size of the solar system,” Kasen says.

It spread out over the galaxy, sending cosmic shrapnel into nearby stars, nebulas, and planets, loading them down with weighty elements. In the recently observed merger of neutron stars, the shear load of material was equivalent to 2,300 times the mass of Earth. Breaking it down into individual elements, around 10 of those Earths would be pure gold.

But these elements haven’t coalesced into planets, hurtling through space like massive pinballs. They’re still nebulous, fragmented, and on the move. They join particles like hydrogen and helium that have been around since the Big Bang, and lighter elements created by exploding massive stars or exploding dwarf stars.

“Galaxies are great at recycling everything,” says Richard O’Shaughnessy, an astrophysicist at the Rochester Institute of Technology who was involved in the recent LIGO discovery. O’Shaughnessy explains that as they move through a galaxy, gasses of elements heat and cool, flow and mix, blending together and distributing material throughout the cosmos.

Solid as a rock

But how does gold go from floating around in the galaxy to sitting, Earthbound and fixed, in the form of your wedding band? Planetary geologists are still figuring out the particulars. In the earliest days of our solar system, some of the gas floating around collapsed to form a star, and around that star more gasses and dust began to form a disc around that star. Things were hot and crowded.

The heat part is particularly important at those early stages. Heat from a star or from radioactive elements is vitally important when it comes to separating metals out from all the rest of the material floating around in an early solar system.

“Solid rock and solid metal aren’t really able to move relative to each other,” says Rebecca Fischer, a planetary geologist at Harvard University. “But once it’s hot enough for things to start melting, they can flow past each other.”

What happens next depends on the behavior of the element. Some materials were content to melt and mix with others, forming oxides and compounds. But some, like gold and platinum, want to stay metallic, and didn’t combine with other materials quite as easily. These dense hunks of metal sunk into the interior of molten objects, which cooled into solids with mostly separate layers of rock and metal.

But remember, it was crowded. Soon, those objects themselves might have then been broken apart by violent collisions, leaving both metallic and rocky asteroids littering the early solar system.

Eventually, larger planets started to form, with metals sinking into the middle of the Earth to create our core. There’s still some debate about how the metals that we see on the Earth’s surface today got there, but some people think that after the Earth’s core formed, and the outer layers solidified, large collisions of metallic and rocky objects provided a last-minute addition of metal to the planet’s upper layers, adding what researchers call a late veneer to the globe.

Heat from inside the Earth kept separating out metals like gold and platinum, and hot springs and volcanoes helped bring the gold closer to the surface. As wind and water cut their way down through rock, and tectonic forces raised up mountains and ripped apart canyons, some gold finally came to the surface. Eventually, humanity discovered that there’s really quite a lot you can do with the shiny stuff—and that people will not only trade for gold, they will fight for it, worship with it, and express their undying love with it. And it all started long ago, when two neutron stars bumped into each other on a cosmic dance floor.