Jupiter has a spooky new look in this sharp infrared photo

The image allows researchers to look deep into the gaseous planet’s raging storms. 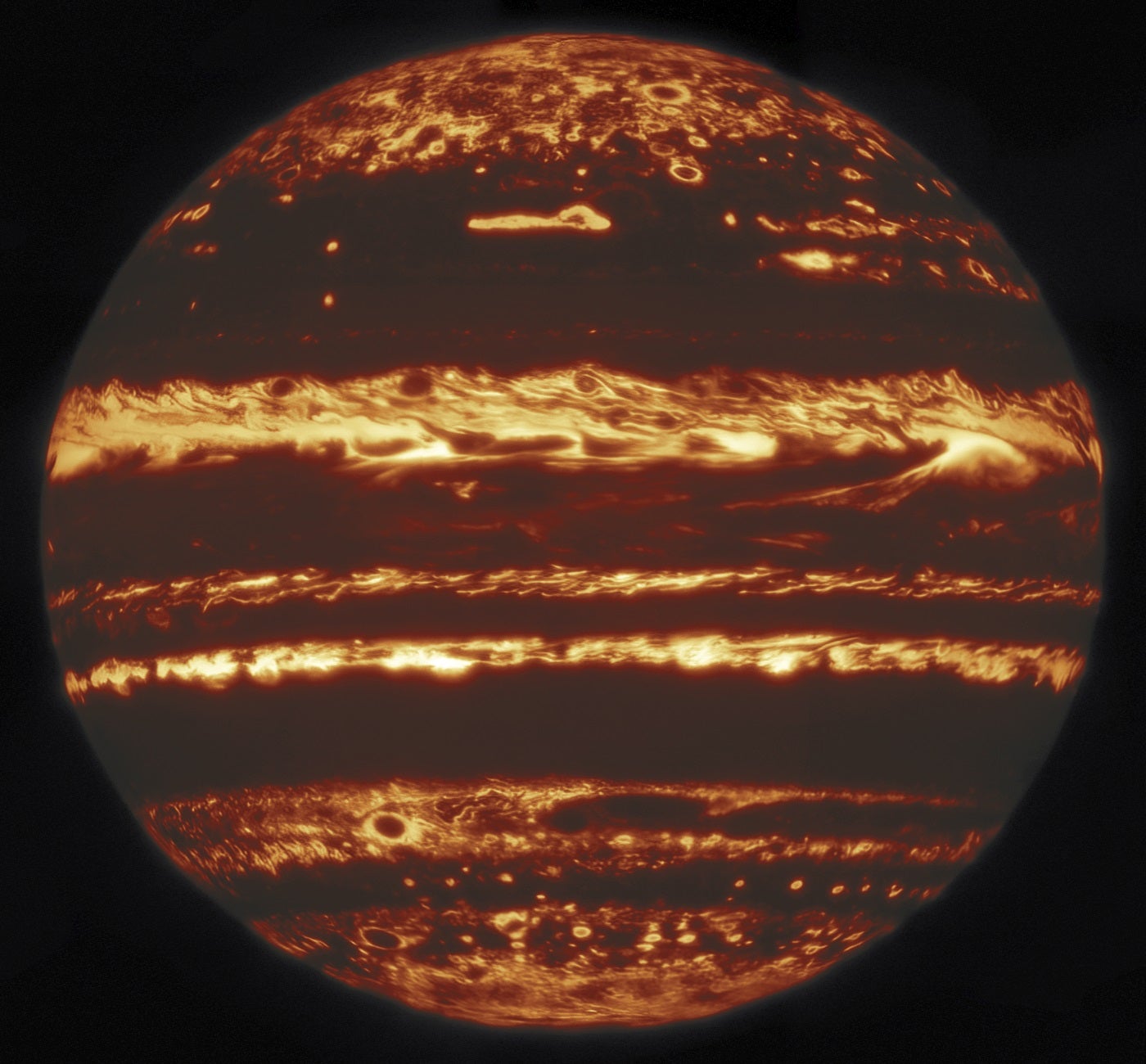 If you think understanding and predicting Earth’s weather is a doozy, Jupiter’s is quite literally a raging nightmare. Scientists have known for a while that the gas giant is characterized by powerful lightning strikes and enormous storm systems, but understanding what goes on in finer detail has been a challenge.

To better understand how these violent storms work, researchers have combined data from a number of imaging systems: Juno, which has been orbiting Jupiter since 2011, the Hubble Space Telescope, which just celebrated its 30th birthday in orbit, and the Gemini observatory, a pair of telescopes that sit atop mountains in Hawaii and Chile. Together, these three technological beasts have allowed scientists to understand and image Jupiter’s weather in more detail than ever before. They published their latest results, along with the image above, in last month’s issue of The Astrophysical Journal Supplement Series.

To create this captivating shot, researchers used images taken by the Gemini North Telescope in Hawaii from nine different angles and combined them using a technique known as “lucky imaging.” The researchers first combined 38 images each from those nine different spots. Then they eliminated all but the sharpest 10 percent of images. Often, images will range in clarity depending on how still Earth’s atmosphere is at the time the image is taken. By selecting and combining only the clearest images from each of the nine angles, the researchers were able to create one, near-perfect image of the distant planet. This final image is among the highest-resolution infrared views of Jupiter ever taken from Earth.

The infrared imaging will help astronomers see further into Jupiter’s stormy weather. Because of its longer wavelength, infrared light passes through thin haze and light clouds, allowing researchers to take a deeper look inside Jupiter’s atmosphere. Because the infrared light gets trapped by thick clouds, the infrared images of the planet create a jack-o-lantern effect, as seen above: Jupiter’s atmosphere glows bright through thin hazes and light cloud coverage, but dark in areas covered by thick clouds.

By studying infrared images of Jupiter, together with other images taken by Juno, Hubble, and even the upcoming James Webb Space Telescope, scientists hope to better understand the furious weather patterns that make this beautiful planet so unique.