What’s the matter with dark matter? 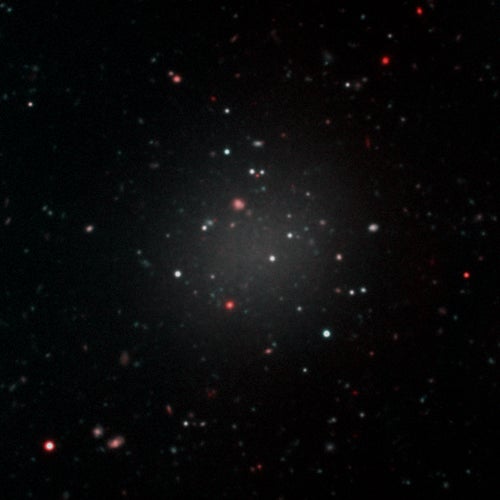 Back in 2000, a galaxy appeared as a smudge on a photographic plate. It was huge, the size of the Milky Way, but also incredibly faint, and hard to observe. Someone gave it a catalogue number and filed it away into obscurity.

It was a member of a relatively new class called an ultra-diffuse galaxy. They’re roughly the same size as our own, but with hundreds to thousands of times fewer stars, leaving them easily outshone by brighter objects in the sky. Years later, astronomers took a closer look using the Dragonfly array, a telescope made up of 48 telephoto lenses—perfect for viewing huge, faint objects like this.

Astronomer Pieter van Dokkum and colleagues wanted to know more about how these star-sparse structures worked, but detailed observations of the (recently published in Nature) were odd. The galaxy appears to have no dark matter—a new, puzzling piece of evidence for astrophysicists to ponder.

What is dark matter, anyway?

We have no idea what dark matter really is, and ‘dark’ might not be the best way to describe it. Researchers have also suggested alternatives like clear matter, transparent matter, or variations on ‘unknown matter.’ It’s essentially a placeholder for something we haven’t found yet. But we know that the something is there. Probably.

“We haven’t actually detected the dark matter particle yet, if it is a particle. We’ve only seen dark matter through its effects on other things,” van Dokkum says.

Those things include the motions of stars and galaxies through the universe, and the bending of light around objects with mass.

“The dark matter model has been incredibly successful in explaining a wide range of phenomena, including the rise of galaxies and the distribution of galaxies in space. But we haven’t actually pinned down what it is,” van Dokkum says.

We know it’s not like other matter that we see in the universe, but that’s pretty much all we’ve got. If it exists, it helps explain a lot—and makes up the vast majority of the universe’s total mass.

“If we could see the universe with dark matter eyes, the stars and planets that we look at in these pictures would be just a little bit of froth on top of this sea of dark matter. The dark matter is really the skeleton on which everything is built. In that context, finding a galaxy without dark matter doesn’t work,” van Dokkum says.

What’s going on in this galaxy?

That brings us back to the newly described oddball.

Having identified the blobby galaxy with Dragonfly, van Dokkum and colleagues started comparing it to other maps of the sky. They noticed about 10 bright points of light within the galaxy; brilliant bursts of stars known as globular clusters.

Basically, the more mass there is, the faster things move. “If the sun was four times more massive than it is, then the earth would have to move twice as fast to stay in its orbit, otherwise it would fall towards the sun,” van Dokkum explains. So by measuring our planet’s movement around the sun—even if you didn’t actually know the sun existed—you could determine the star’s mass.

He does the same thing with galaxies. By measuring the motion of stars or clusters inside the galaxy, scientists can figure out how much mass it has. “If things are moving fast there must be a lot of mass holding these things together. If they are moving slowly there must be very little mass, otherwise it would collapse in on itself,” van Dokkum says.

And this galaxy is moving very, very slowly. So slowly, in fact, that clusters almost appeared immobile. To van Dokkum, that means this galaxy can’t contain a bunch of dark matter.

That isn’t even the most puzzling thing about this galaxy. It’s also odd in how it compares to others that seem superficially similar. A few years ago van Dokkum and colleagues identified a galaxy made up almost entirely of dark matter. This is the exact opposite, but both giant galactic blobs appear pretty similar.

“The eye is deceiving in this case. It’s two completely different kinds of objects that happen to look the same. That’s very exciting in itself,” van Dokkum says. Typically, astronomers assume that by looking at the mass of stars in a galaxy they can get an accurate estimate of dark matter within. “That seems to apply to galaxies like the Milky Way. But if you go down to these very diffuse objects, that apparently completely breaks down. And that is something we didn’t know and didn’t expect,” van Dokkum says.

A galaxy without dark matter causes problems, paradoxically, for researchers searching for explanations of the universe’s structure that don’t involve dark matter.

“People are trying to find [dark matter], but the longer it takes to find it, the more people are thinking ‘maybe its something else, maybe we’re just on the wrong track,’” van Dokkum says.

Some alternative strategies include re-examining our basic understanding of gravity and rejecting the idea of dark matter, saying that instead all the movements of the stars and galaxies can be understood with a different interpretation of physics.

But van Dokkum says this object poses a real problem to those theories. If the modified gravity ideas hold true, and dark matter doesn’t exist, then the laws of physics that govern all galaxies should be the same; the physical structures that explain away dark matter’s influence in one galaxy should affect this one, too. So under that paradigm shift, this new galaxy would appear to defy the laws of physics. “This really suggests that it’s stuff,” van Dokkum explains. “It’s something that a galaxy has or doesn’t have. It almost always has it, but apparently, sometimes it doesn’t. That means it is a thing that is either associated with an object or not, and has its own existence separate from the rest of galaxies.”

“This tells me full steam ahead,” says Cooley, who was not involved the paper. “Unfortunately, it doesn’t tell me exactly where to look. But it continues to give credence to the idea that dark matter is a particle, and that makes me very happy.”

“Then we’ll be hunting to see if we can find more, and I’m sure other people will too, once the results are announced,” van Dokkum says. “Well, first they’ll probably spend some time trying to prove that we’re wrong,” he adds with a laugh. “But after that, they’ll start looking for other objects.”

In the meantime, scientists from other fields of physics will keep up their hunt too.

“There’s a complementarity that goes on when you’re searching for dark matter,” Cooley explains. While she is trying to detect dark matter particles here on Earth, scientists working at the Large Hadron Collider are smashing particles together to try to create some of their own and study its properties. Meanwhile, astrophysicists and astronomers like van Dokkum continue their exploration of dark matter’s apparent influence on the fabric of the cosmos.

“If we want to understand what dark matter is and what is really going on with this whole picture, we want to know that what we’re detecting here on Earth, and what they’re making in the colliders, is the same thing that they’re seeing out in the cosmos,” Cooley says. “Together, as a community, we can hopefully someday understand the really big picture.”