A black hole and a gas cloud pulse together in sync—but why? 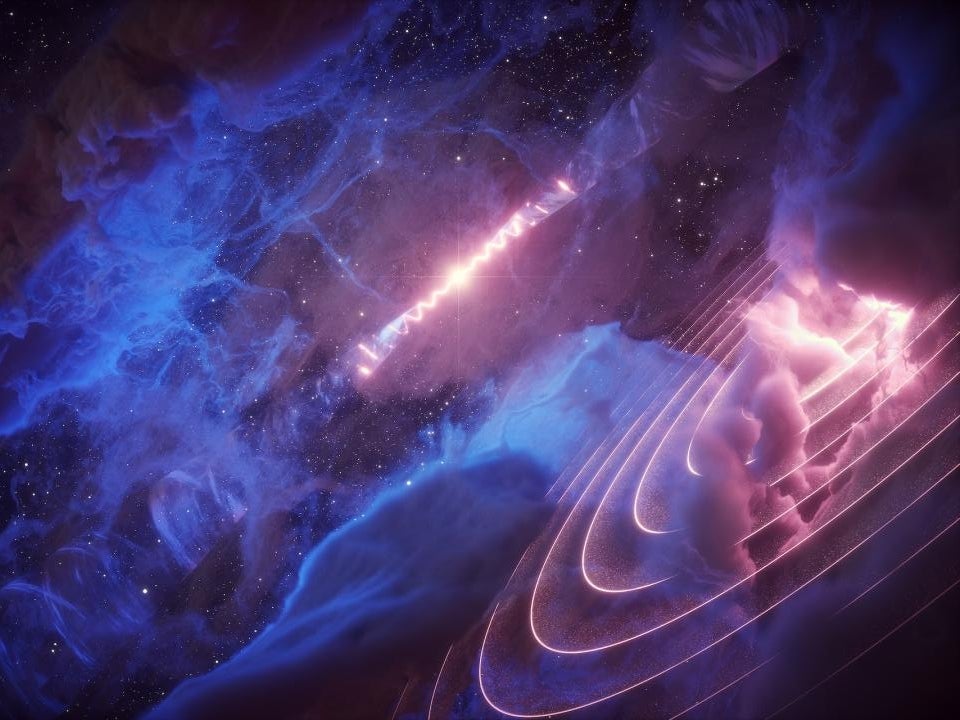 The microquasar SS 433 (background) sways with a period of 162 days. The inconspicuous gas cloud Fermi J1913+0515 (foreground), about 100 light years away, pulsates with the same rhythm in gamma rays, suggesting a direct connection. But how exactly the microquasar drives this 'heartbeat' of the gas cloud is still puzzling. DESY, Science Communication Lab
SHARE

About 15,000 light-years away from Earth, a cloudy patch of space within our galaxy produces ultra-bright flashes of gamma radiation like clockwork. That’s not all—researchers found the unusual “heartbeat” coming from this cosmic gas cloud is beating along in time with the pulses of a black hole, located a whopping 100 light-years away from it. Researchers remain puzzled as to what the unusual long-distance relationship is between the two.

Using data from the Arecibo Observatory in Puerto Rico and NASA’s Fermi Gamma-ray Space Telescope, an international team of researchers found the “heartbeat” in a system known as SS 433, about 15,000 light-years away from Earth in the constellation of Aquila. The scientists behind the discovery outlined their findings in a paper published Tuesday in Nature Astronomy.

“Microquasars are really powerful particle accelerators in our galaxy,” says Jian Li, an astrophysicist, Humboldt Fellow with the Deutsches Elektronen-Synchrotron in Germany, and co-author of the study. “This could offer a testbed to study how particles are produced and transported in the universe.”

SS 433 became the first known microquasar ever discovered back in 1977, and only a few dozen more have been identified since. Microquasars are scaled-down versions of quasars—the brightest and most distant star-like objects in the known universe—and both are believed to be powered by spinning black holes.

In the SS 433 system, a black hole orbits a giant star 30 times the mass of Earth’s sun. The black hole sucks matter from the giant star, forming a swirling accretion disk that drains into the black hole. Though some of the material falls into the hole, some shoots into space via two jets from the disc’s center in opposite directions, like pegs on a wheel. The disk of SS 433 wobbles like a spinning top over a period of about 162 days, causing the two streaming jets to spiral their way into space rather than beaming out into two straight lines.

When researchers performed a timing analysis on an unremarkable cosmic cloud about 100 light-years away from SS 433, referred to as Fermi J1913+0515, they detected a gamma-ray signal with precisely the same period of time—162 days. “This periodicity is not expected from previous papers or previous theories,” Li says. “Discovering such an unambiguous connection by way of timing about 100 years away from the microquasar and not even alongside the path of the jets is as sudden as superb.”

So why are these two unassociated objects pulsating in sync? Li and his colleagues have a theory to explain it: Protons from the outflow of the black hole are interacting with the cloud, leading to gamma-ray emission and the ‘heartbeat’. Protons produced at the ends of the jets near the black hole outflow and are then injected into the cloud. Whenever the protons strike the cloud, it lights up in gamma rays. These gamma-ray pulses could make up the cosmic “heartbeat’ researchers discovered.

“The recent discovery of the new Fermi source pulsating with precession period of SS433 gives us new information on the propagation of the relativistic particles emitted by SS433,” says Masha Chernyakova, an astrophysics professor at Dublin City University who was not involved in the study. In other words, it gives us a better idea of how highly energized particles catapult through the universe.

Still, as Chernyakova points out, the source is relatively weak, so researchers need additional data to really know what’s going on behind the unlikely synchronized duo. Li and his team are already in the midst of collecting follow-up observations with the IRAM 30m millimeter radio telescope in Spain.