They charge forth at 350 miles per hour. 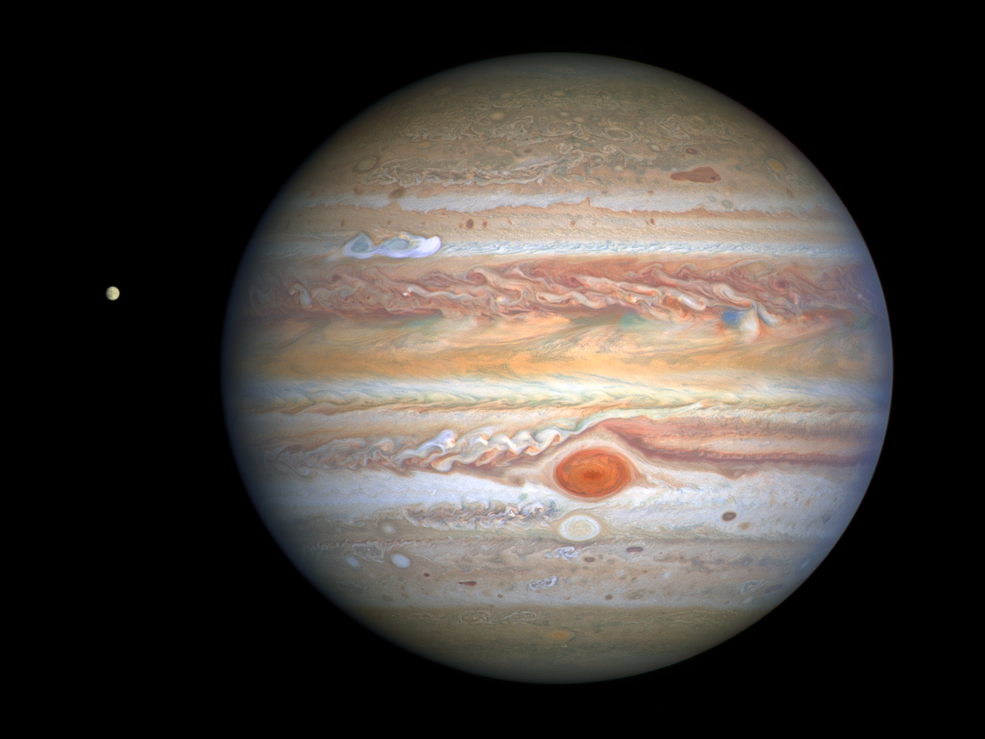 This latest image of Jupiter, taken by NASA’s Hubble Space Telescope on Aug. 25, 2020, was captured when the planet was 406 million miles from Earth. A unique and exciting detail of Hubble’s snapshot appears at mid-northern latitudes as a bright, white, stretched-out storm traveling around the planet at 350 mph. Hubble shows that the Great Red Spot, rolling counterclockwise in the planet’s southern hemisphere, is plowing into the clouds ahead of it, forming a cascade of white and beige ribbons. Jupiter’s icy moon Europa, thought to hold potential ingredients for life, is visible to the left of the gas giant. NASA, ESA, STScI, A. Simon (Goddard Space Flight Center), M.H. Wong (University of California, Berkeley), and the OPAL team
SHARE

Jupiter’s stormy weather has always astonished astronomers: astronomers have captured evidence of ammonia-laden hail during thunderstorms, and its gassy landscape is the perfect environment to brew violent, giant storms that can last for centuries. Now, an image taken by NASA’s Hubble Space Telescope shows how these massive hurricanes form.

Taken on August 25, the telescope captured a seven-day-old baby storm forming in the northern hemisphere of the planet (in the image, it’s the long swirled plume on the upper left side). The “bright, white, stretched-out” storm, as NASA described it, travels at 350 mph, almost twice the fastest wind speed in a hurricane on Earth.

A week later, around September 1st and 3rd, observations of the planet made from Earth uncovered two more storms appearing around the same time at the same latitude. “Because there is a big network of amateurs who observe Jupiter, it is much more common to catch new storms as they appear than it was 10 or 20 years ago,” says Amy Simon-Miller, planetary scientist at NASA’s Goddard Space Flight Center. Yet Hubble’s snapshot in particular is an important piece in helping astronomers understand more deeply how storms emerge and consolidate in Jupiter, she says.

The region where the new storms appeared is where Jupiter’s jet streams reach the highest speeds. So, usually before consolidating, storms in that area are torn apart by the violent winds moving at 330 to 400 mph. The cloud plume or little tail visible in the photo is highly unusual for storms in that region of the planet, Simon-Miller said in an email.

The fact that they are seeing several intact cloud plumes in the same area could mean that the whole region may become more turbulent, she added. “Whatever is allowing these features to not be pulled apart by the winds may also allow them to also eventually form new, longer-lasting spots.”

Complemented with ultraviolet and near-infrared photos of the planet taken on the same day, NASA scientists are trying to figure out how the energy in the storm is moving, and things like how high it extends or how thick are the clouds in it.

But that’s not the only piece of information the photo is offering. The snapshot also captured Jupiter’s most ancient storms in all of its glory, the Great Red Spot. With no solid surface to slow it down, this hurricane has been circling the planet’s southern hemisphere for at least 150 years, moving at windspeeds faster than any hurricane on Earth. At 9,800 miles in diameter, the hurricane is big enough to swallow Earth (7,917 miles in diameter).

After comparing the recent image of the Great Red Spot with images captured in previous years, the new photo will allow astronomers to continue mapping how the spot is changing over time, nurturing the efforts to find out if the hurricane will ever disappear (and if so, when).

The image is part of the Outer Planets Atmospheres Legacy program (OPAL), which started in 2018. By recommending yearly monitoring of the gas and ice giant planets—Jupiter, Saturn, Uranus and Neptune— the program helps scientists track long-term changes in the planets’ atmospheres and figure out the underlying mechanisms moving their storms, winds, and clouds.