We finally know how bright the universe is

Astrophysicists measured all of the lights. 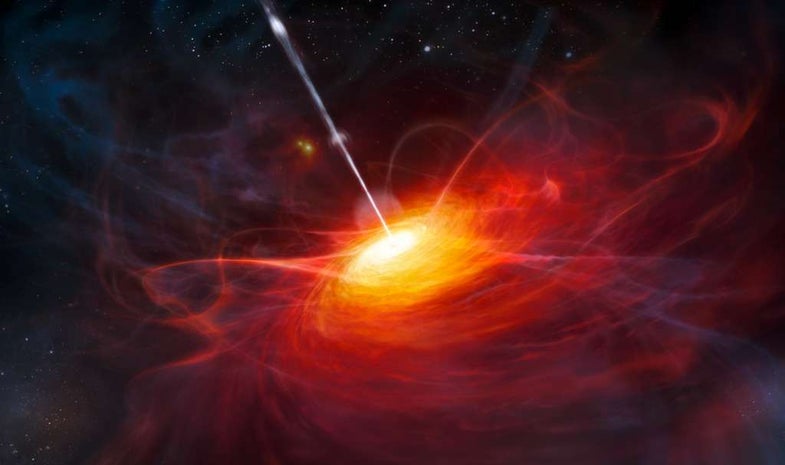 The Earth glows faintly with the bustle of humanity. From far away you can’t pick out individual homes, or even cities, but by tracking the collective photons that our spotlights and streetlights throw out over time, you might be able to get a rough sense of the rise of technological civilization—and you might notice if all of the lights started going out.

The same story applies to the universe at large.

Stars are the ultimate light bulbs, and while some of their rays dead-end into dust-particles, others get away intact. Space has a reputation for being cold and dark, but out in the comparatively empty void between galaxies, these escaped particles of light collectively produce a diffuse glimmer everywhere. This glow tells you what’s out there without the hassle of counting all the stars and galaxies one by one. Borrowing tools from particle physics, an international team of astrophysicists has carried out the most accurate and sweeping measurement yet of this light, the collective shining of all the universe’s stars.

Their results, published Thursday in Science, tell an epic tale covering most of the universe’s history, and even poke at the veil of the cosmos’s first billion years—an epoch invisible to traditional astronomers. “I would have never believed that a measurement of this kind would be possible,” says Marco Ajello, an astrophysicist at Clemson University and the team’s leader.

To find the Extragalactic Background Light, as those in the know call it, you can’t just point your telescope at a patch of black sky and count photons: you’ll have no way of telling local sunbeams from truly external rays of light. Rather, the team took advantage of hundreds of cosmic accidents.

Huge black holes lie in the center of most galaxies, and some of the most monstrous let unimaginably violent jets of gamma rays rip into space—an area smaller than our solar system slinging out as much energy as our whole galaxy. When these jets happen to be pointed straight at Earth, astronomers call them blazars. They are some of nature’s most powerful particle accelerators, and NASA’s Fermi Space Telescope is one of humanity’s best gamma-ray detectors.

“Thanks to Fermi and our work, we can combine two different fields, high energy physics and classical astronomy,” says Alberto Domínguez, an astronomer at the Computense University of Madrid in Spain and coauthor.

The team analyzed nine years of Fermi data containing the light from more than 700 blazars and one gamma ray burst and found that the rays were getting weaker as they traveled, plowing through the background light that fills the universe like headlights cutting through fog. The thicker the fog, the dimmer the headlights, so comparing blazars near and far revealed the brightness of the interfering background light. And since the gamma rays took billions of years to get here, the team could also see the background light as it appeared throughout the past. “We go back pretty far, which is really one of the breakthroughs,” Domínguez says. “We were able to cover 90 percent of the history of the universe.”

While all the galaxies ever have unsurprisingly spit quite a few photons into the void over the eons, that light doesn’t shine all that brightly. If you could turn off all the lights on Earth and wink out all of the stars in the Milky Way, the sky wouldn’t go quite dark. It would glow with the brightness of a 60-watt light bulb viewed from 2.5 miles away, according to Ajello. Its dimness speaks to a classic paradox in cosmology: if there are stars everywhere you look, why is the night sky not blindingly bright all the time? Part of the answer, according to modern cosmologists—and Edgar Allan Poe, who somehow solved the puzzle first—is that the universe’s explosive expansion has diluted light as it spreads out through space.

And so, as galaxies fight to light up the expanding darkness, the resulting modest glimmer has tracked the universe’s activity over the ages. Domínguez expects that the new measurement will illuminate mysteries from the cosmos’s obscured origins to its expansion-driven future, but first, the team focused on settling a debate regarding the 13-odd billion years in the middle: did we miss any major characters in our story of how stars and galaxies came to be?

Past studies of star formation peered deep into space and measured the ultraviolet light from the massive stars that tend to live fast and die young, but no one could be sure these surveys weren’t missing galaxies that were too faint to see. But the cosmic fog represents light from all galaxies no matter how small, and the team’s reconstructed timeline provides an entirely new line of evidence supporting the commonly accepted arc. Stars formed slowly at first and then faster and faster until peaking about three to four billion years after the big bang, and then falling off as star-stuff ran low and galaxies moved farther apart. Today the Milky Way births about 7 new stars per year, so similar galaxies in the universe’s youth may have produced 70 or 80. “Our universe was lit up like a Christmas tree,” Ajello says.

The new result doesn’t include any light that hit dust particles and was re-emitted as heat in the infrared—which represents about half of the energy of the background light—but Domínguez says they’ve accounted for this blind spot in their reconstruction of star formation.

Ajello’s team is not the first to probe the cosmic fog between galaxies. Their work builds on decades of theoretical estimates and both ground- and space-based attempts to catch the photons directly. But with light from the sun bouncing off local dust particles outnumbering the background light 100 to 1, it was like hunting for fireflies at noon. “You’ve got to get out of the galaxy,” says Joel Primack, a cosmologist at the University of Santa Cruz who was not a member of Ajello’s team, but has played a role in developing the theory underlying the measurement. “How are you going to get out of the galaxy? The answer is, these gamma rays.”

Measuring the fog by its interference with gamma rays only became possible thanks to a better understanding of blazars in recent years. Domínguez, Ajello, and many others proved the idea feasible using Fermi data in 2012, but the new work uses a wider range of sources and upgraded software to push from four billion years after the big bang back to the ultimate target—the first billion years. “We always want to look where we cannot,” says Ajello.

This era remains hidden from modern astronomers because a thick haze of hydrogen atoms blocked light from moving around, and cosmologists wonder exactly what emitted the ultraviolet light that turned the universe clear—starry galaxies or black hole jets, for example. Fermi can’t resolve distant enough blazars to settle the debate conclusively, but the team’s background light measurement does keep starry galaxies in the running.

Ajello hopes that catching more distant—yet more fleeting—gamma ray bursts could push even further back into these early days. “You need to be very quick and rotate a large optical telescope while they are still bright,” he says. “That would be spectacular.”