Why is the night sky dark?

Looking at the stars takes you back through time. All the way to the beginning. 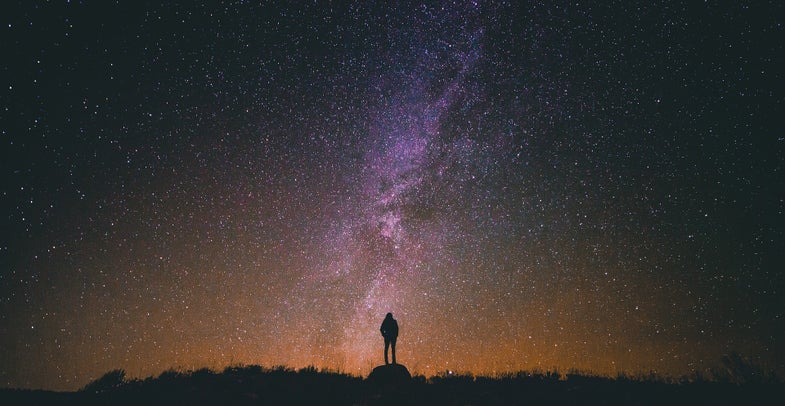 It didn’t have to look this way. In a never-beginning and never-ending universe, the sky would look blindingly bright. Pixabay
SHARE

You might have wondered why the sky is blue. Or what gives sunsets their brilliant red. These bright colors stick out in the natural world and beg for an explanation. But have you ever wondered why the night sky is black?

The question barely makes sense the first time you hear it. “It’s like asking why is water wet,” says Will Kinney, a cosmologist at the University at Buffalo, currently on sabbatical at Stockholm University in Sweden. But for centuries the darkness of the night sky had astronomers stumped. They called the puzzle Olber’s Paradox.

Distant stars look weak, and very distant stars shine too dimly for you to see with your eyes. But when space telescopes like Hubble peer deep into the darkest spots of sky, they uncover bunches of incredibly faint galaxies. And the deeper they look, the more they find. If the universe went on forever with stars sprinkled evenly throughout—as many early stargazers assumed—the night sky would be full of so many points of light that it would never look dark.

“The fact that the stars are everywhere makes up for the fact that some of the stars are far away,” says Katie Mack, an astrophysicist at North Carolina State University. No matter which way you look, in an endless universe your line of sight would always end smack on the surface of a star, and the entire sky would always blaze with the brightness of the sun.

The fact that night exists at all proves that the stars we see don’t go on forever. To understand why, think about how light rays travel from a far away star to your eyes.

Like people and cars, light has a speed, so even though it moves very fast it still takes time to arrive at its destination. When you get a postcard from a friend on vacation, you learn what they were doing last week when they sent it, not what they’re doing the moment you read it. When you look at a planet, star, or galaxy, you’re also receiving a message from the past, a message that tells you what the bright object was doing at the moment it sent the light to you. When you look at the sun (indirectly, of course), you’re seeing the light it emitted eight minutes ago. Jupiter appears as it was at least half an hour ago.

Your journey into the past speeds up as you look past our solar system. Light from the second closest star (after the sun) takes more than four years to reach Earth, and spotting the most distant star visible to the eye takes you back 4,000 years. When astronomers study the neighboring Andromeda galaxy, they see it as it was 2.5 million years ago. If a cosmic disaster somehow erased it tomorrow, light wouldn’t carry that message to Earth for another 2.5 million years.

The farther out into the universe you look, the farther back in time you see. “Cosmologists are really lucky,” says Kinney. “You can see the entire history of the universe laid out in a nice line.”

The mystery of the dark sky is solved by the fact that this history has a beginning—a time before stars and galaxies. Many cosmologists think the universe started out as a very small point, and then started inflating like a balloon in an event called the Big Bang. If you look deep enough, you can see so far back in time that you get close to the Big Bang. “You just run out of stars,” Kinney says. “And you run out of stars, in the grand scheme of things, relatively quickly.”

Cosmologists call this early era the Cosmic Dark Ages. During this time, space was, as you can probably guess, pretty dark. Stars were just starting to burn, and a thick fog of hydrogen gas blocked what little light there was. No matter how good your eyesight—and the upcoming James Webb telescope will have sharp peepers indeed—when you look back this far there’s just not much to see.

When you look up at the starry sky, the darkness you see is, in some sense, the darkness left over from that early era. Stars do not light up the entire sky because the part of the universe that we can see has a finite size—it does not go on forever as the early astronomers thought. “There’s not enough light to fill in all the gaps,” Mack says.

Probing the farthest and oldest parts of the universe usually takes years of research and powerful telescopes, but the night sky has been dangling the answer to one fundamental question right before our eyes the whole time. All you have to do is go and look at the spaces between the stars.