We’re closing in on one of the most important numbers in the universe. 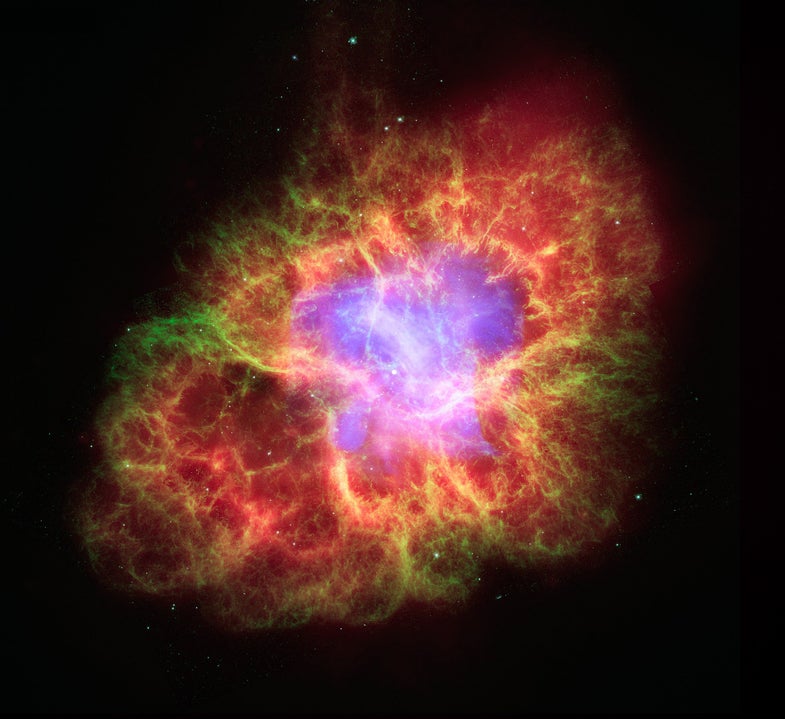 When cosmologist Daniel Holz took off from Hong Kong on August 17, 2017, his head swirled with the ideas he’d spent the last week lecturing on, including his hope that vibrations in space would someday settle an ongoing debate regarding the size and age of the universe. But he knew it would take time. Time for two of the densest objects in existence to smack together and shake the cosmos hard enough for us to feel the rumble here on Earth, time to locate the disturbance, and time to swing our telescopes toward the collision before the accompanying burst of light faded back into darkness.

Optimistically, such paired observations of both gravitational waves and light from these neutron star collisions were about ten years off, he had told the audience in his last lecture the previous day. The Laser Interferometer Gravitational-Wave Observatory (LIGO) collaboration had already detected black hole mergers and the Virgo interferometer had just come online in Italy two weeks earlier, so the enterprise was developing smoothly. But when Holz, who works at the University of Chicago, returned to Illinois, he learned the future had arrived early. The gravitational shockwaves set off by the collision of two nearby titans had rippled through his plane—and the entire planet—while he was in the air, and observatories around the world were scrambling for follow-up optical observations.

“We landed, and my phone exploded. I immediately connected and just sat there on my laptop starting to work,” Holz recalls. “That was the most amazing experience of my life.” Twelve hours after touchdown he had a back-of-the-envelope calculation for the most contentious number in cosmology: the speed of the expanding universe. With just one data point he couldn’t get the decisive measurement he’s dreamed of for thirteen years, but he finally knew the project was possible. Now, after doing some more math, he’s back with a new prediction: the LIGO collaboration may be able to settle the decades-long debate within five years, according to his recent letter in Nature.

The conversation revolves around one question: How fast is the universe expanding? Finding the answer, known as the Hubble constant, is simple in theory. You start with a receding object, typically a star undergoing a particular type of death. These “type 1a supernovae” always explode in the same way, so researchers can get an idea of their distance based on their brightness. To calculate the Hubble Constant, you also need to know the speed at which the explosion is moving away from you, which you can get from looking at its color, a measure of how stretched its light is. Researchers can also do something similar with information in ancient light left over from shortly after the big bang, known as the cosmic microwave background (CMB) radiation. Once you know the speed of expansion you can work backward to figure out the exact size and age of the universe or push forward to look at its future trajectory.

The problem is that the two current calculations give different results.

The most recent estimates for the supernova method (73.5 kilometers per second per megaparsec, as of January) and the CMB method (67.4, as of June) differ by about 9 percent. The discrepancy didn’t cause much alarm in the field initially, since the measurements are devilishly difficult in practice. A big, far off explosion looks like a weak, close one, so finding the distance to supernovae relies on the “cosmic distance ladder,” a complicated technique that involves relating three types of objects at different distances, or “rungs.” Astronomers first study flickering stars in our galactic backyard with basic geometry and then transfer that knowledge to similarly behaving stars in distant galaxies to get a read on the supernovae happening there. “They’re incredibly careful in so many different ways,” Holz says. “But there’s a lot of sausage in there.”

Studying the CMB calls for less machinery, but more assumptions. The background radiation preserves a record of the expanding universe in its infancy, and to extrapolate to the present cosmologists have to draw on everything they think they know about what gravity, matter, dark energy, and dark matter have been doing during the intervening 13 billion years. Any number of flaws could have thrown either method off, but even as astrophysicists in each camp have checked and re-checked their math, the two estimations have refused to converge. Now the chance that the cosmological community has just had an incredible string of statistical bad luck is pushing 1 in 1,000.

“It’s gotten to a point now where we’re like ‘wow, that’s probably not just a fluke,'” says Adam Riess, a cosmologist at John Hopkins University who works on the supernova method. “There’s something interesting going on, something we don’t understand about the universe.”

Holz has bet his career on the idea that gravitational waves could serve as arbiter. The idea, which originates from a speculative 1986 paper by American physicist Bernard Shutz, is that another type of dead star could replace supernovae as a cleaner yardstick for cosmic distances. After blowing up, giant stars that don’t quite have what it takes to become a black hole collapse into neutron stars—a scrum of particles so dense even atoms get crushed. When two of these stellar corpses crash together, the impact sets off a ripple known as a gravitational wave.

Because these waves are undulations in space itself, nothing gets in their way. Unperturbed by dust and gas clouds, they spread out from the crash site until reaching Earth, where the scientific community operates three L-shaped detectors (with more on the way) to nab them. As a wave passes through the planet, it gives it a light squeeze. One arm of each L becomes about one-proton shorter than the other, and the apparatus notifies physicists and astronomers around the world. Using the exacting equations of general relativity, researchers can measure the distance to the collision accurately with little calculation and few assumptions—no ladder climbing or particle counting required.

Holz refined the theory in 2005, suggesting that spotting the light from a neutron star crash along with sensing the waves would provide speed information to complement the gravitational wave distance reading, and joined LIGO to spearhead such an effort. Many of his colleagues told him it was never going to happen, he recalls, since astronomical data predicted that neutron star mergers should occur extremely rarely, but all the pieces came together on August 17 just as he was flying home.

The Hubble Constant from that event came in at a very rough 70, smack between the traditional two, but with uncertainty engulfing even the most extreme supernovae and CMB estimates. Settling the conflict calls for shrinking that possible error to 2 or 3 percent, which will take between 30 and 50 collisions of the type observed last year, Holz calculates in his recent paper. Based on LIGO’s increasing sensitivity and the assumed rate of neutron star mergers, he now expects to have enough data to decide between the two Hubble Constant contenders within five years. Riess, who wasn’t involved with the work, agrees that gravitational waves offer a plausible and exciting path forward, but points out that it’s tough to guess how often we’ll find mergers. “Maybe they’ll accrue faster,” Riess says, “but if they accrue 10 times slower I don’t want to wait 50 years.”

Holz admits that it’s hard to guess how often something will take place after it’s happened just one time, but says there’s reason for optimisim—if he’s done the math right. His model, which he based on common statistical tools for counting rare events, predicts detections of between 30 and 400 mergers by 2026. Any of those outcomes would push the uncertainty in the Hubble Constant south of 3%, he expects, so no one should have to wait 50 years.

If gravitational waves do let us conclusively clock the expansion of the universe, there are three possible outcomes. LIGO data could back the CMB method, meaning the cosmic ladder failed to reach the supernovae accurately. Riess says only a “conspiracy of errors” could explain how half a dozen independent calibration methods all failed so badly, and likens this case to being struck by lightning multiple times.

Both Holz and Riess say it would be much more interesting if neutron stars support the supernova calculation, which would point to a mistaken assumption in how the universe evolved from its birth to now—a much-anticipated sign of new physics. Gravity might have acted differently than we expect, Holz speculates, or there could be undiscovered particles missing from the cosmological accounting.

Alternatively, LIGO could come back with an entirely different measurement for the Hubble Constant, outside of the range set by both supernovae and the CMB. This outcome would create a nightmare scenario, shaking cosmology to its core. “That would just cast doubt on all of our abilities to make measurements period,” Riess says, “I hope we’re not in that place.”

For now, Holz just feels thrilled that his bet is paying off. Last year he thought the first data point was still a decade off, and in a few months he’ll be listening for the second when LIGO comes back online in February. “I’ve spent years working on this idea and developing it,” Holz says. “And in the span of less than half a day, it unspooled in front of me.”