The play-by-play of a total solar eclipse

Excerpt: Mask of the Sun 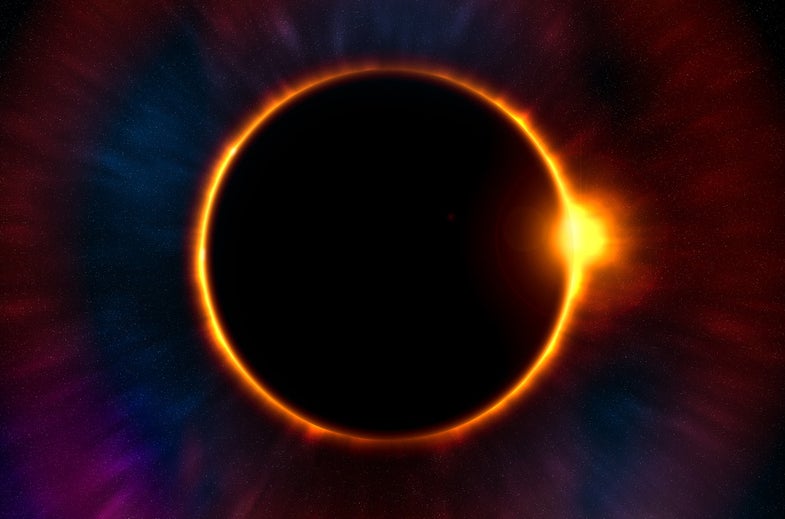 The following is an excerpt from Mask of the Sun: The Science, History and Forgotten Lore of Eclipses by John Dvorak.

There is much to see and very little time to do anything during a total solar eclipse. It begins when the Moon’s silhouette first touches the bright disk of the Sun, a moment that is known as first contact.

The amount of sunlight obviously decreases as the Moon continues to slide in front of the Sun, but because the human eye can adjust to the lesser light, the decrease is hard to notice until several minutes before totality. By then animals have started to respond. A gust of wind might be felt. Edmond Halley noticed such a wind in 1715 when a “Chill and Damp attended the Darkness” that caused “some sense of Horror” among the spectators. As the Sun disappears behind the Moon the ground begins to cool. That halts the rise of warm air from the ground, which causes a change in wind speed and a change in wind direction. There may also be a noticeable drop in air temperature that can be accompanied by the formation of fog. In contrast, there is no evidence that solar eclipses cause a change in cloud patterns, probably because the duration of an eclipse is too short to change the air temperature of the upper atmosphere.

As totality nears, things happen quickly, pulling one’s attention in different directions. The Moon’s shadow will soon pass over the ground, moving from west to east. The last rays of brilliant sunlight will soon shoot through valleys along the Moon’s rim and form Baily’s beads. The corona begins to appear, though at first very faint.

Then, at the moment of second contact, when brilliant sunlight is completely obscured, a bright red streak might be seen for a few seconds along that section of the Moon’s rim that has just extinguished the Sun. This streak is the chromosphere, which lies above the photosphere and which was first clearly described by George Airy in 1842 during a solar eclipse that he saw from Italy. He was looking at the eclipsed Sun through a telescope and saw what to him looked to be a range of bright red mountains. Today these “mountains” are known as spicules, and in appearance—in photographs much more detailed than Airy could have seen—have been likened to choppy sea waves or to a prairie fire burning through windblown grass. Actually, they consist of millions of gas jets. To put the chromosphere in perspective, the gases of this layer are about 5,000 degrees hotter and a million times less dense than the gases of the photosphere.

Around the rim of the eclipsed Sun may be one or more solar prominences. These are also masses of hot gases, rising higher than the chromosphere, which take the form of arches or irregular clouds that are suspended at these high levels by intense magnetic fields, such as those associated with sunspots.

And, much too soon, the eclipse is over. The moment when sunlight returns, the Sun and the Moon are at third contact. Then, when the Moon finally moves completely off of the Sun, it is fourth contact.

The exact time when each of these four contacts will occur is what one finds listed when examining a modern eclipse prediction, a prediction that represents a culmination of intellectual curiosity and the accumulation of knowledge from around the world that took more than four millennia to produce. It is this understanding of the intricate workings of the universe that is one of the hallmarks of modern thought. It is the modern way that we link ourselves to the heavens.

Excerpted from Mask of the Sun: The Science, History and Forgotten Lore of Eclipses by John Dvorak, published by Pegasus Books. Reprinted with permission. All other rights reserved.