We may finally have a way to weigh the Milky Way

But more importantly, we know a bit more about why the galaxy is the way it is. 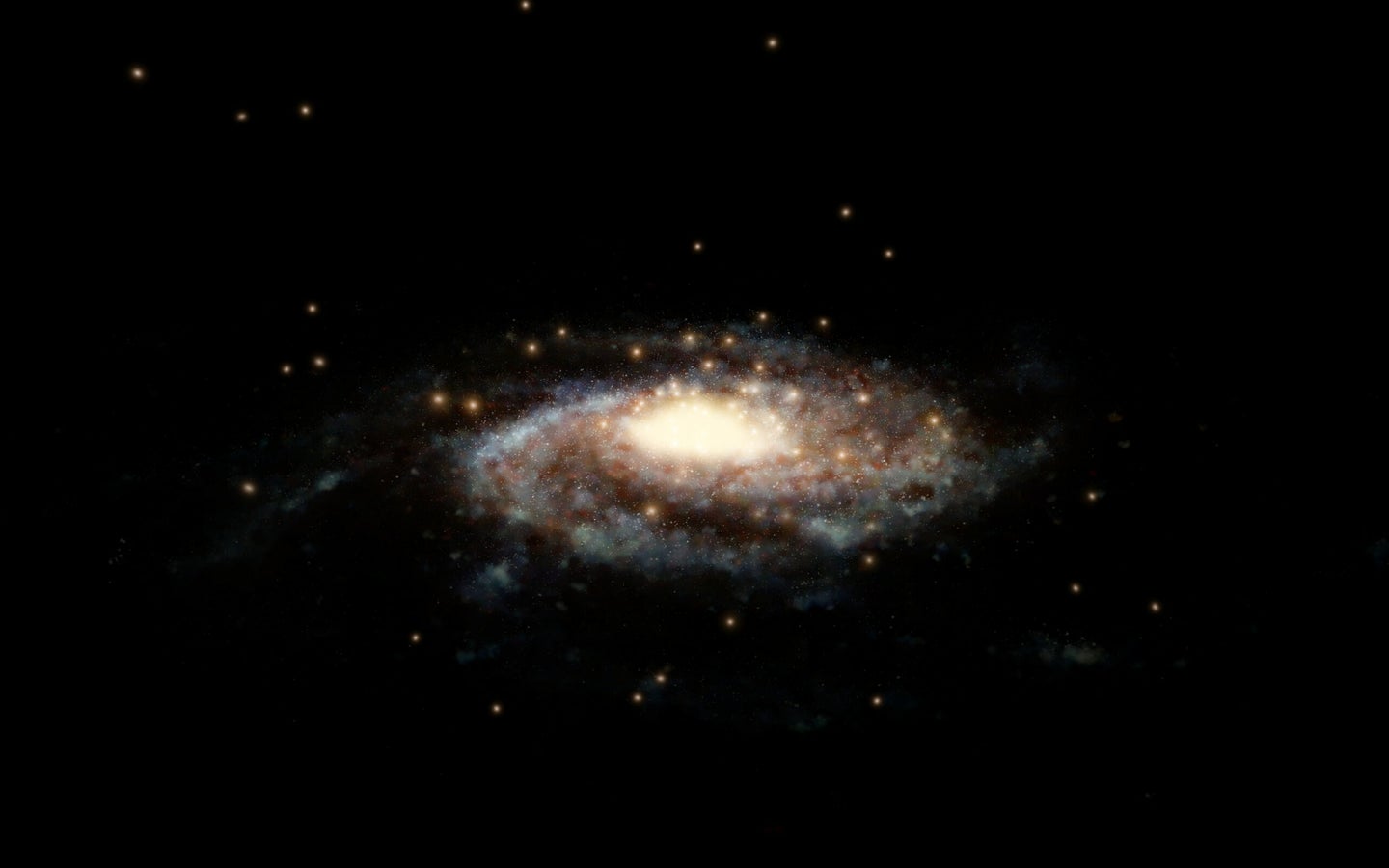 Imagine you’ve lived all your life in a single town, and have no clue how big that town is and how far it stretches. In 2019, that’s an unimaginable prospect. But from an astronomical perspective, that’s exactly our situation—we have no idea how big the Milky Way galaxy is or how much it really weighs. Thankfully scientists have a few ideas for how to answer these questions. In a new study to be published in The Astrophysical Journal, scientists report a new and improved estimate for how big the Milky Way is: it weighs in 1.5 trillion times the mass of the sun, with a radius that stretches out to about 129,000 light-years from the galaxy’s center.

It’s not entirely surprising we’ve previously failed to peg the mass of the Milky Way. The galaxy is made of billions upon billions upon billions of hot, blusterous stars, planets, and objects of all kinds of sizes, strewing about through a dark vacuum. And nearly 90 percent of everything out there is dark matter, which we have never directly observed in any capacity (we only know it exists because we can observe its gravitational forces acting on the objects that we can see). Our previous estimates for the galaxy’s mass ranged wildly between 500 billion and 3 trillion solar masses.

That imprecision isn’t just an isolated mystery. It bleeds into and stymies the work other astronomers pursue. “Since we’re living in the Milky Way, there are no other galaxies that we understand better,” says S. Tony Sohn, a scientist with the Space Telescope Science Institute in Baltimore and a coauthor of the new study. “This means that a lot of things, like our cosmological models, are calibrated to the Milky Way.” We basically use the Milky Way as our reference for understanding how everything in the universe originates and evolves, including the Milky Way itself.

In the models we use to conduct this work, “the most important physical quantity is mass,” says Sohn. Without mass, we can’t, say, figure out how dark matter in the galaxy works and where it might be located or predict what’s going to happen when the Andromeda galaxy slams into our own in eight billion years. Mass is everything.

Since you can’t very well plop the Milky Way galaxy on a gigantic scale, how do you measure its mass? One way is to measure the movements of other objects in the galaxy and see how fast or how slow they move based on their original position. The idea is that the more massive the Milky Way is, the more gravitational force the galaxy will exert on the objects, causing them to move faster.

Historically, it’s been difficult to study these motions in more than just one dimension. That’s where ESA’s unprecedented Gaia mission comes in. Its express purpose is to scan the entire night sky and catalog as many stars as possible—and provide their 3D velocities. “If you get a better sense of the 3D motions,” says Sohn, “you can actually get a more reliable mass estimate.” He and his colleagues used the second data release from the mission to track the motions of the Milky Way’s globular clusters and other agglomerates of stars.

The group was able to use the Gaia data to characterize about 34 different globular clusters located as far as 65,000 light-years away. But while Gaia is capable of peering into space with an incredibly wide view, its depth is limited. So Sohn and his team shored up their data collection using decade-long Hubble observations of 12 other clusters as far as 130,000 light-years from Earth. Afterward, the team plugged the numbers into models that can determine mass, and voila—we have an estimation of 1.5 trillion solar masses for the Milky Way.

That’s not to say the new estimation is perfect, or will help answer our larger cosmological questions in full. In fact, according to Sohn the new numbers are only accurate to about 30 to 40 percent, and he acknowledges that they are probably way off from the true value of the Milky Way’s mass. In an ideal investigation like this, you’d be able to study moving objects all the way out to edge of the galaxy, but Gaia just can’t see that far out. Astronomers are limited by taking what we know from closer to Earth, and extrapolating those values into approximations farther out based on our best tools.

Still, this a massive improvement upon previous models, and it’s exciting to know this value will only get more precise as more observations are made and our instruments become sharper. Sohn says the third Gaia data release should be coming out in just a couple years, and the team will have a relatively easy time applying the same method they used in this study and revising the mass number into something more accurate. And with each revision, our framework for understanding the past, present, and future of the universe is filled with more clarity.