These wet worlds would join the familiar rocky planets and gas giants in our neighborhood. 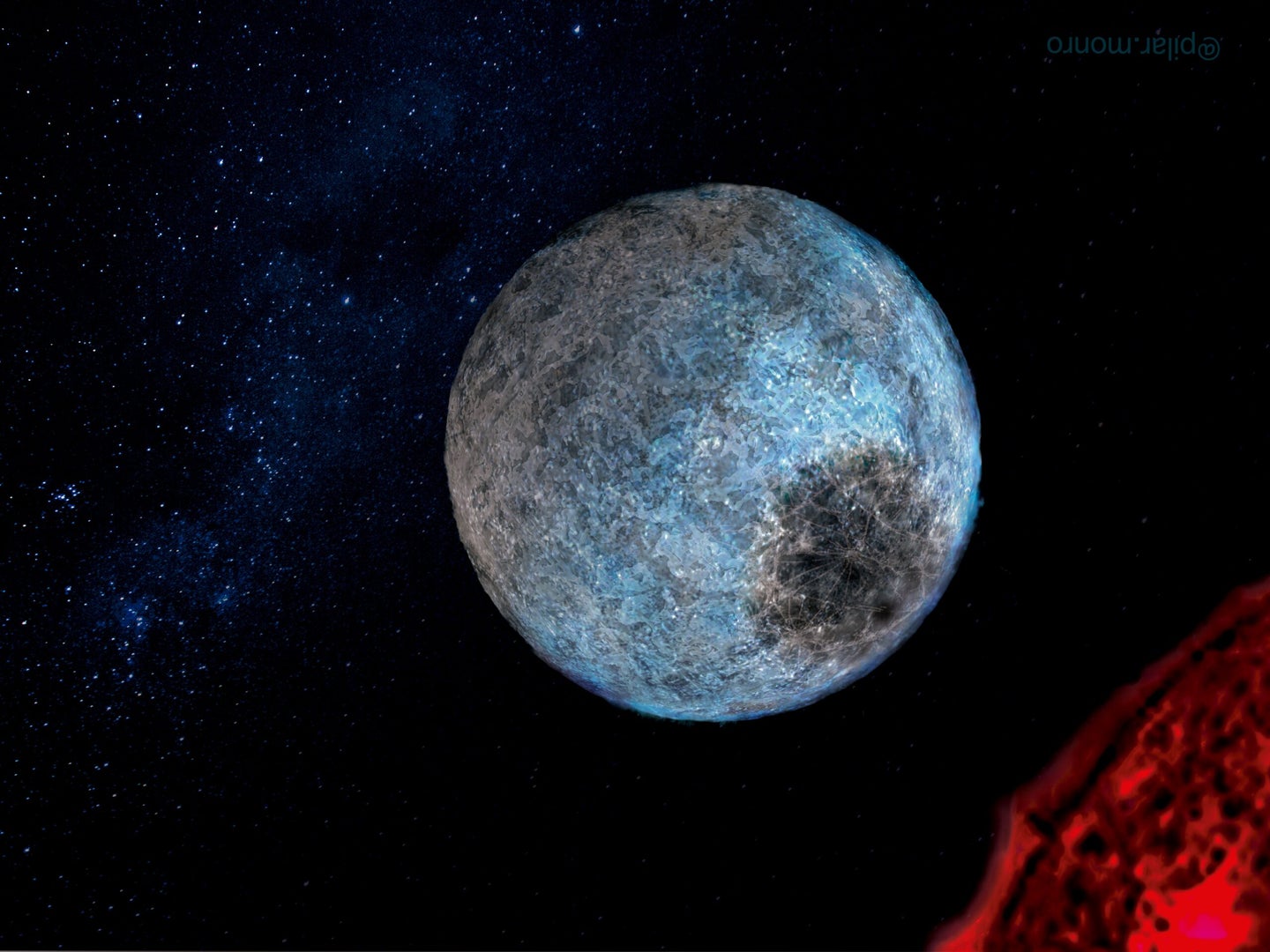 Exoplants may be even more wet than Earth, as illustrated here, possibly with oceans beneath rock layers. Pilar Montañés
SHARE

Astronomers typically divide the planets in our solar system into two types: Rocky worlds and gas giants. But, according to a new study of planets in other star systems in our galaxy, there’s a third kind of world, which is made up of about 50 percent water and 50 percent rock. And such a water-rich world is a tantalizing place for astronomers to test their hypotheses about what makes a planet capable of supporting life.

“Within our lifetimes, we may, for the first time, be able to say something scientifically proven about habitability on other planets,” says Rafael Luque, a postdoctoral fellow at the University of Chicago who is the first author on the new study published Thursday in the journal Science. “And that’s a major, major step.”

In recent years, astronomers have been rapidly detecting new planets orbiting stars beyond our own, called exoplanets. To date, more than 5,000 exoplanets have been discovered and confirmed. But figuring out exactly what those worlds look like—and therefore whether or not they might be habitable—from light years away is a difficult feat.

Most exoplanets have been discovered using what is called the transit method, which identifies a planet indirectly by observing how its star’s light dims slightly when the planet passes in front of it. Astronomers can also infer the radius of an exoplanet by how much starlight it blocks. Scientists have used that information to compare these alien worlds with the planets in our own solar system as a way of hypothesizing what they might look like. A planet with the same radius as Earth, for example, is thought to be quite rocky.

But in orbit around many red dwarf stars, which are by far the most common stars in our galaxy, there’s a kind of planet that doesn’t have an analog in our solar system. Based on their radii, these worlds fit in the gap in size between Earth and Neptune.

[Related: Newly discovered exoplanet may be a ‘Super Earth’ covered in water]

The thinking among astronomers has long been that those small planets fit into two categories: some were thought to be “super-Earths” and some were “mini-Neptunes.” This idea was bolstered by the observation of a dearth of exoplanets that had a radius around 1.6 times that of Earth, which is called a “radius valley,” explains Ravi Kopparapu, a planetary scientist at NASA’s Goddard Space Flight Center who was not involved in the new study. The way that a star’s radiation erodes a planet’s atmosphere, he says, has been thought to explain that gap in radii.

By that logic, “super Earths,” which were on the smaller side of that radius valley, were left with very thin atmospheres and a largely exposed rocky surface. “Mini-Neptunes,” on the other hand, had retained thick, puffy atmospheres and therefore these gassy planets had larger radii.

But there could be other ways to build an exoplanet to have those radii. Because they have no analogues in our solar system, these worlds could be truly alien. So to figure out what materials might make up these distant planets, Luque and his collaborator Enric Pallé sought to determine their density.

Density isn’t something that can be measured directly from so far away, but with a planet’s mass and radius, it’s a simple calculation (mass divided by volume equals density). The researchers used the radius and mass measurements from 34 planets newly detected by the Transiting Exoplanet Survey Satellite (TESS), which launched in 2018, to gather a sample of densities for these mysterious small exoplanets.

[Related: We may be underestimating how many cold, giant planets are habitable]

Based on their calculations, the radius valley is not what separates the different types of planets in orbit around red dwarf stars. It’s density. And they extrapolated that those exoplanets can be one of three types of world: rocky, gaseous, or, the new type, water-rich.

“We may think of Earth as a water-rich planet, but the water on Earth is just 0.02 percent of its total weight,” Luque says. The density of these distant water worlds, meanwhile, indicates that about half of their mass is water.

But don’t start picturing a world with a rocky core and a deep ocean of water sloshing around on top of it, exposed to space, Luque says. “What we’ve seen in our sample is that this water cannot be on the surface,” he says. “The water may be trapped below the surface or maybe mixed with the magma, but it is not going to be in the form of deep, deep oceans–at least not at the surface.”

The closest analogues that we have in our own solar system to such water-rich worlds are the moons of Jupiter and Saturn. For example, Europa, one of Jupiter’s moons, has a deep ocean sloshing around under a global water ice shell.

It’s unlikely that these exoplanets have a water ice shell, Luque says, because they are much closer to their star–any water on the surface would evaporate. That is, at least, on the sun-facing side of the planet. These worlds do not turn on their axis to have a day and night cycle like Earth does. Instead, there is a permanent light and dark side. However, Luque says, perhaps there is a region where the light and dark side meet, in a sort of a perpetual twilight, where the temperature on the surface might be just right for liquid water to be stable.

In the search for habitable worlds, astronomers typically use liquid water as a guide. That’s because it is essential for life as we know it (that is, life on Earth, because it is the only life we know of so far).

“We only have one template of life in this universe, so we use that as a template to find life elsewhere,” Kopparapu says. But stable liquid water isn’t the only thing needed to make a place habitable by that definition, and just because a place is capable of supporting life doesn’t mean that something lives there, he adds.

To investigate the habitability of these distant worlds, astronomers will turn to tools like the newly-launched James Webb Space Telescope (JWST), which can peer into the chemistry of exoplanet atmospheres to reveal more details about their composition. With telescopes like JWST, astronomers will look for water vapor to confirm the presence of H2O as well as gases like methane, oxygen, carbon dioxide, nitrogen, and more that are found in Earth’s atmosphere.

“We are finding more and more evidence that there are a lot of potentially habitable worlds. Our Earth is not unique,” Kopparapu says. He uses an analogy: “If you move into a new neighborhood, and you want to introduce yourself to your neighbors, you may see a lot of houses but you don’t see many people. So we are finding lots of houses. Now we just need to find people.”