Are we alone in the universe? Probably not.

Given all the real estate in the cosmos, astronomers generally agree there's got to be other beings out there. A new tool might help find them. 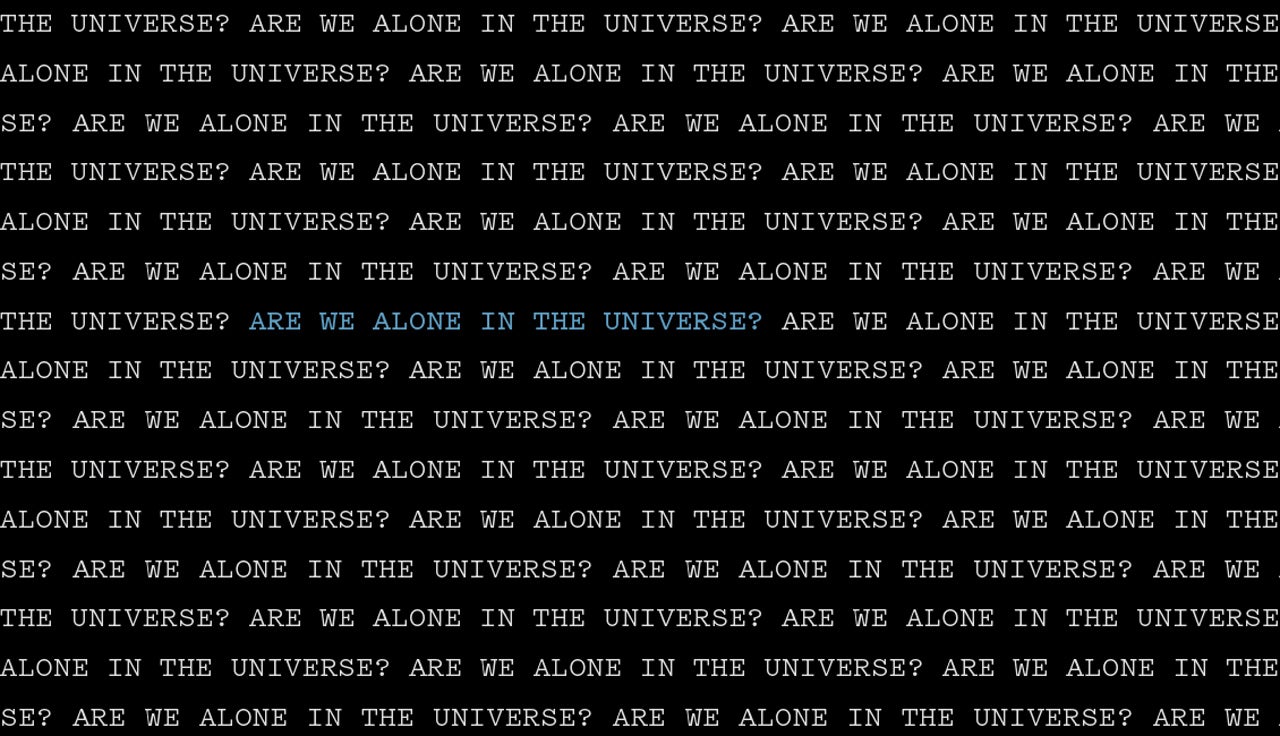 Measured edge to edge, the universe as we know it stretches some 93 billion light-years across. That unfathomable expanse contains 2 trillion galaxies, each shining with millions of stars and dotted with more planets than you can imagine. Given all that real estate, it seems unlikely we’re alone. Yet in all of human history, we’ve found nothing to suggest otherwise.

Scientists who have spent their careers searching for any sign of an otherworldly civilization concede it’s possible we’ve got the cosmos to ourselves. Still, they highly doubt that’s the case. “To say this is the only place where there’s any intelligence is hubris of a very high order,” says astrophysicist Seth Shostak of the SETI Institute. (The acronym stands for “search for extraterrestrial intelligence.”) Statistically speaking, there are too many locations where life could thrive for humanity to be an anomaly.

Astronomer Frank Drake suggested as much in 1961. He posited that the number of technologically advanced civilizations in our galaxy would be the product of seven variables. They include the number of stars throughout the Milky Way, how many of those bright, burning gas balls illuminate planets, and what percentage of those worlds could support life. His eponymous equation was a thought exercise meant to start a discussion among colleagues, but it has helped frame the topic in the years since he wrote it.

Many of Drake’s variables are speculative, making his math little more than conjecture. But astronomers now know for certain that exoplanets, many of which could harbor life, form throughout the Milky Way like dust bunnies under your couch. In the past two decades, researchers have confirmed the existence of more than 4,000 planets in our galaxy, a finding that suggests the cosmos all but brims with them. Astrophysicist Christopher Conselice of the University of Nottingham puts the number at 100 quintillion. That’s a one with 20 zeros. Some think there may be far more than that.

Scientists debate just how many of those planets could host life, but a common estimate suggests 20 percent of the 250 billion or so stars in the Milky Way may shine on rocky worlds temperate enough to allow liquid water. Do the math, and you’re looking at tens of billions of Goldilocks planets in our neighborhood alone where the gears of life could start grinding.

Could does not mean did, of course. Yet many astronomers say the complex biochemistry that created intelligent beings on Earth surely occurred more than once in 13.7 billion years, given the tens of billions of opportunities to do so in just one galaxy out of trillions. To suggest otherwise defies physics and the mediocrity principle, which states that, from a probability standpoint, our solar system is more likely a common event than a rare beast. “I think the universe is teeming with life,” says Sara Seager, an astrophysicist and planetary scientist at Massachusetts Institute of Technology.

So where is everybody?

Italian physicist Enrico Fermi posed that question in 1950, and many scientists have riffed on it. They argue that there must be planets older than Earth, and that at least one society of extraterrestrial beings would be advanced enough to possess technology that would alert us to its presence—which is what astronomers mean by “intelligent life.”

That assumes anyone beyond our solar system wants to make contact. Alien beings might lay low to avoid attracting interstellar bullies. They could lack the technology to greet us, or we may not yet have the means to hear them calling (or understand the message). Anyone out there could be so far away that we haven’t received their signal. It’s possible that this big blue marble is an astronomical backwater no one else finds interesting enough to bother checking out. It’s also conceivable that other civilizations have already come and gone, wiped out by some cosmic event, catastrophes of their own making, or simply the passing of time. In that case, perhaps we’ll one day find evidence of their existence.

But many astronomers believe there is a far more logical reason we haven’t found anyone: Space is too spacious. For all our searching, we haven’t looked much beyond our own neighborhood. Retired astronomer Jill Tarter, a 40-year veteran of the search for extraterrestrial intelligence and emeritus chair for research at the SETI Institute, likes to use an analogy: If you imagine all the places where we could look for life and all the ways we could do so as the world’s oceans, we’ve examined just one cup of water. Others in her field are more generous; they say we’ve filled a small swimming pool.

It is about to get a bit deeper. On a high, arid plain about 400 miles northeast of Cape Town, South Africa, an array of 64 white antenna dishes called MeerKAT peers deep into space. That kind of research generates staggering quantities of data. By 2020, a supercomputer should begin analyzing it for even the faintest electronic signal suggesting that someone’s out there. Astronomers hope to survey 1 million stars within five years, about 1,000 times more than any project before it. “There’s some chance we’re going to see a signal, that we’re going to make a detection,” says University of California at Berkeley astronomer Andrew Siemion, who leads the project. He and his colleagues may yet find the evidence that they’re sure is out there, waiting to be discovered.