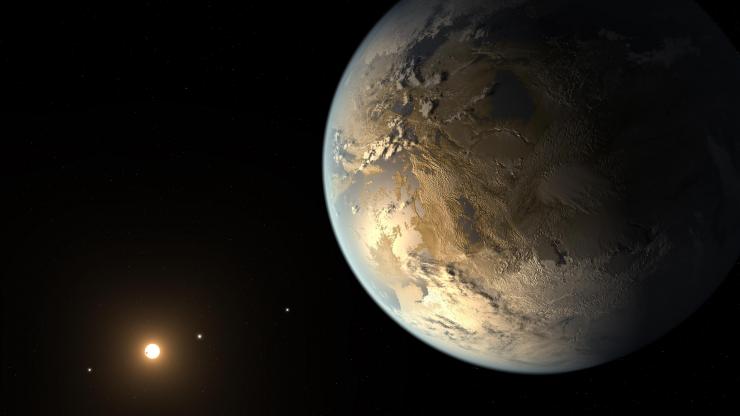 Why do we have seasons on Earth? The planet’s axial tilt, of course. But the tilt does more than just push us from spring, to summer, to fall, to winter. It’s also an important stabilizing force for our atmosphere—without which life on Earth would be almost assuredly impossible. And so it stands to reason that tilt might play an important role in fostering life on other worlds as well. That brings us to some new findings, published in The Astronomical Journal, that suggest a pair of potentially habitable exoplanets possess stable tilts, which bolster the chances they are more Earth-like than we imagined.

Those planets are Kepler-186f and Kepler-62f, 550 and 990 light years from Earth, respectively. The former, whose discovery was first announced in 2014, was actually the first Earth-sized exoplanet found in the habitable zone of its star; the latter has a mass 2.8 times that of Earth (making a super-Earth). “It was already known that these two exoplanets are likely rocky, and they reside in the habitable region, where liquid water could exist on the surface of the planets,” says study author Gongjie Li, an assistant professor at Georgia Tech. “We are seeking to constrain the habitability of these planets further, to know better how likely these two planets could host life.”

Spin axis essentially determines how the heat and radiation emanating from a star gets distributed when it reaches that planet. Some axes will allow for this distribution to be relatively mild, while others might cause more extreme environments to arise. In addition, a planet’s tilt will sometimes oscillate back and forth, and larger oscillations on the axis could cause bigger variations in how this stellar radiation spreads, affecting the atmosphere circulation and the climate of the planet.

“It is not known in detail how the spin axis variations and the climate really influences the existence of life in general—robust life forms could exist in extreme environments, too—but a stable environment could be a good way to start,” says Li.

For instance, it’s thought that axial tilt is one reason Mars, despite being in the habitable zone of our solar system, lost a thick atmosphere and went from being a warm, watery world to a cold, dry hellscape within the last four billion years. The axial tilt of the red planet has varied wildly from zero to 60 degrees, and that instability means an inability to maintain a proper hold on its atmosphere. Earth’s axis, on the other hand, only oscillates between 22.1 and 24.5 degrees, roughly every 10,000 years, which is why the blue planet has been so good to life for so long. Li’s co-author, Yutong Shan from the Harvard-Smithsonian Center for Astrophysics, does point out that “Earth’s axial angle would also have been more unstable if it didn’t have such a large moon which, at least in this case, has a stabilizing effect.”

Kepler-62f and Kepler-186f were of particular interest because they exist farther from their host stars than Earth or Mars do. “Also importantly,” says Shan, “spin axis dynamics is richest in multi-planet systems because spin axis variability result from gravitational interactions between planets. Both 62f and 186f are in five-planet systems, and we understand the properties of the other planets pretty well because they all transit their star.”

After making calculations, the pair ran some simulations based on the numbers they had, and found that the spin axes for both planets are pretty stable, despite both lacking their own moons. In spite of having quite a few neighboring exoplanets to contend with in their respective star systems, they aren’t faced with gravitational effects that would destabilize their axes. “That’s good news to the kind of lifeforms whose emergence and survival rest on the long-term stability of their home planets,” says Shan.

Li believes this type of dynamical analysis of spin axis “can be easily applied to other exoplanetary systems,” and could go a long way in helping to bolster or reject suspicions of habitability for other worlds.

“I think the exciting to take away,” says Eric Agol, an astronomer at the University of Washington who first discovered Kepler-62f, “is that these type of dynamical studies can be connected to real systems. Now we actually have possible prospects to characterize [multi-]planetary systems like this. A lot of times that’s a problem doing theoretical work—with so many parameters to take into account, it isn’t always clear which targets have the most promise [for habitability] and which don’t.”

Lisa Kaltenegger, director of the Carl Sagan Institute at Cornell and part of the Kepler-62f (and 62e) discovery team, thinks the findings are part of a lively discussion on the role of axial tilt on exoplanet habitability, but she does emphasize, “life that develops on other worlds… should be able to develop for any axis tilt. Life would probably have evolved differently if Earth had had a different axis tilt, but no one knows if the differences would have been substantial or if we would just live in different parts of our own world.”