Is there a planet—or even planets—waiting to be discovered out there? 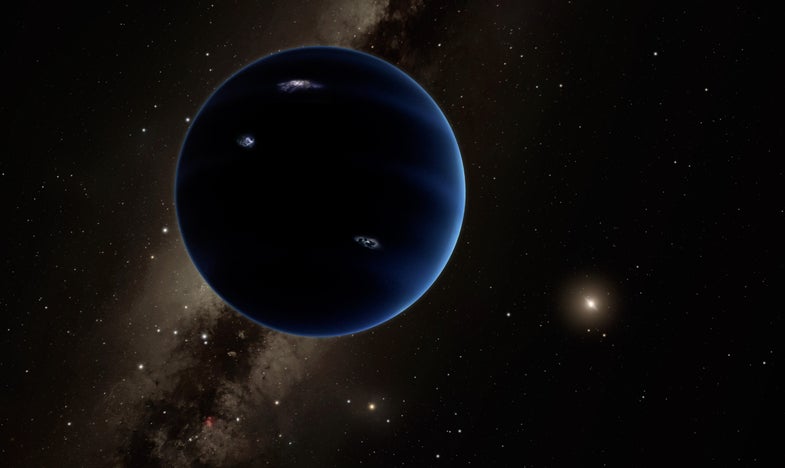 In 1992, the discovery of a small object unlocked a big secret: that the solar system was far more vast than we’d ever imagined. Before, we’d only confirmed the existence of lonely, strange, cold Pluto, in a region of space called the Kuiper Belt. The Kuiper Belt is a grouping of icy objects located in an area just outside the orbit of Neptune—like a colder, more watery asteroid belt. Up until 1992, it had been strictly theoretical because no one had observed anything beyond Pluto. The discovery of 1992 QB1 marked only the second time an object in the Kuiper Belt had been found. In the next few years, discoveries of these small, cold worlds snowballed—80+ were found between 1992 and 1999, and hundreds are known today. With the outer solar system surveys at Mauna Kea and La Palma observatories in the 1990s, we finally began to unlock the “third zone” of the solar system as something more than theoretical.

Now, as our understanding of the outer solar system has grown, we’re facing new questions. And it’s renewing talks about planets past Neptune. And not Pluto, Eris, Makemake, or the other fascinating and dynamic dwarf planets that we’ve already identified—but undiscovered objects possibly Mars-sized or larger.

In some cases, those dwarf planets may be pointing the way to bigger things—like previously undiscovered planets. In 2003, astronomers Mike Brown, Chad Trujillo, and David Rabinowitz announced the discovery of the object Sedna. Sedna’s orbit seemed to extend out as far as 970 times the Sun-Earth distance (known as an astronomical unit or AU) before coming back in for a close approach at 76 AU. Sedna’s entire circuit around the Sun is expected to take 11,000 years.

Sedna seemed weird. But the discovery of 2012 VP113 began to complicate things. That object, announced in 2014, was out even further than Sedna. But it shared a lot of commonalities—it also had a long, strange orbit, tilted over the plane of the solar system. And there were other objects like this, a group whose closest approach to the Sun was no closer than 30 AU and whose farthest point was out past 250 AU.

“The discovery of these ETNOs shows that this remote section of the Solar System is far from empty and that the properties of its inhabitants are sometimes rather puzzling,” Carlos de la Fuente Marcos of the Universidad Complutense de Madrid says.

This led astronomers Mike Brown and Konstantin Batygin to an unusual conclusion: the eccentric and off-plane orbits of these objects were no coincidence, but paths carefully united by avoiding an even larger object. And that object is a cold, distant planet that was termed “Planet Nine” in the 2015 paper announcing its prediction. Planet Nine itself likely started out close to the Sun but migrated out into the farther reaches of the solar system, which twisted its path around the Sun.

The planet would have an oblong orbit that takes it around the Sun, approaching our star as close as 200 AU at its nearest point and as far as 1,200 AU at its most distant. The whole trip would span an estimated 10,000 to 20,000 years. If it’s out there, it should be bright enough to reflect some of the Sun’s light, making it visible to telescopes here on Earth. The only catch—it moves so slowly that it may take some time to differentiate it from background stars.

The idea is that Planet Nine formed along with the other eight known planets, and then migrated out toward the outer solar system as Jupiter and Saturn gradually destabilized its orbit. As Planet Nine moved out, it upended a large chunk of the icy bodies in the Kuiper Belt, leaving behind bodies like Sedna that have since been called “extreme trans-Neptunian objects.” “They’re just like taking a cake, cutting out a piece, and then throwing out the rest of the cake,” Batygin, a professor at Caltech, says. The “rest of the cake”—a massive chunk of icy worlds ranging in size from small comets to moderately sized rocky planets on the outskirts of the Kuiper Belt—likely got flung out of the solar system entirely. In all, 75 percent of the mass of the outer Kuiper Belt was lost in this migration.

Batygin and Brown say they have a 99 percent certainty that Planet Nine is out there. Their confidence that Planet Nine exists hinges on these 10 or so extreme trans-Neptunian objects. More are still being found—the most recent discovery was announced just last week. Named BP519, it has a Sedna-like orbit. Planet Nine is expected to be about 10 times the mass of Earth, and is likely to be the largest object that remains undiscovered. Its predicted orbit, and our understanding of the movements of planets, dwarf planets, asteroids and comets within our solar system makes it incredibly unlikely that any other hidden ice giants are lurking in those outer limits. “I think in some sense, you can think of [Planet Nine] as the last big object in the solar system,” Batygin says.

Infrared surveys have ruled out anything Jupiter or Saturn-sized to a large degree of certainty. But there could be other planet sized objects out there, just nothing big. “You can still have maybe Earth and Mars sized objects, but the solar system is indeed running out of real estate,” Batygin says.

Last year, Kat Volk, a professor at the University of Arizona, was the lead author of a paper in the Astrophysical Journal theorizing a different undiscovered planet. She, too, took a look at the Kuiper Belt population, looking for odd orbits, and dug up more than a few. Volk says the paper was partly inspired by the Planet Nine news, and was a way to look for other objects of significant heft by looking at the orbital dynamics of the Kuiper Belt.

But the further out she went, the weirder they got. While most of the solar system exists along a plane extending outward from the Sun, with few deviations more than a few degrees, these outer Kuiper Belt objects had unreasonably high deviations. These deviants pointed toward a hidden perturber: a Mars-sized planet about 100 AU away from the Sun. Like Planet Nine, it would move slowly, but would still be able to reflect light from the Sun.

“We estimated how bright thing this thing would be, and it would actually be reasonably bright, so you don’t need anything particularly special [to find it],” Volk says. A sky survey like the Large Synoptic Survey Telescope could help find it by taking nightly pictures of the sky and looking for slow moving objects.

Beyond that, there have been a few papers in recent years to propose other planets. A paper in the Monthly Notices of the Royal Astronomical Society in 2014 suggested that at least two more planets more massive than Earth might be in the outer solar system. One of those authors, de la Fuente Marcos, later revised this to one object that behaved somewhat similar to Planet Nine, but is closer in to the Sun.. Another paper suggesting a remote super-Earth at 4000 AU based on a radio signal was quickly withdrawn when other astronomers in the community saw the seeming impossibility of the claimed size and parameters of the object. Simply put, if the Atacama Large Millimeter-submillimeter array could pick up such an object by mere happenstance with a narrow field of view, then we should be seeing more objects like this out there—far more mass than we believe our solar system has ever contained. And alternative explanations for the odd orbits of Sedna and its ilk abound— involving large planets with alternate orbital configurations to Planet Nine.

Volk says that while she’s fairly neutral on Planet Nine’s existence, “it’s sparking new ideas in terms of what dynamics we should be thinking about.” A better understanding of the outer solar system will likely yield new surprises—and in the next few years as surveys like LSST and giant telescopes like the 30 Meter Telescope and the James Webb Space Telescope, we may not be just finding Planet Nine, but Planet Ten or even Planet Eleven. It may be a matter of calculating the right place and aiming a telescope there, much like the discovery of Neptune in 1847 by Johann Galle (or John Couch Adams, depending on who you ask) based on predictions by Urbain Le Verrier, or it may be by finding something subtly moving night-to-night in an all-sky survey. Simply put, there’s a lot out there to find.

“There’s a lot of things we haven’t found in the Kuiper Belt,” Volk says. “It’s not like the asteroid belt, where we know all the large objects. We can’t even rule out Neptune-sized things in the really distant solar system yet.”