And it could help prove the existence of Planet Nine. 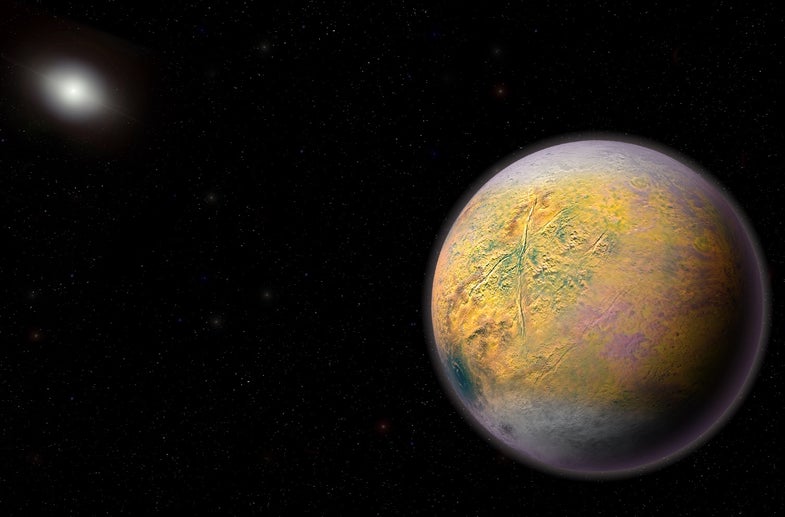 There’s a lot more going on in our solar system than just the eight (or maybe nine) planets you learned about in school. Space fans got a reminder of this yesterday when a team of researchers announced the discovery of a new dwarf planet nicknamed “The Goblin” on the edge of our solar system. The dwarf planet, which has a weird orbit, might provide further evidence for the existence of a theoretical world much larger than Earth lurking in a hard-to-study region of our Solar System called the Oort Cloud.

The Goblin—formally known as 2015 TG387—is the largest mass yet found at its distance from the Sun, and the farthest away. The survey that turned up The Goblin previously found two other objects near that range, Sedna and 2012 VP113. Although each of those objects has a perihelion (the point in their orbit where they’re closest to the Sun) more distant than The Goblin’s, the furthest point they travel away from the Sun is also nearer.

Until fairly recently, astronomers didn’t have the tools to study the stuff on the outskirts of our Solar System. When they started looking, they found lots of objects, says Scott Sheppard, who is part of the team that discovered The Goblin. But many of those objects come close enough to the giant planets we know about, like Neptune and Jupiter, that these larger bodies influence their orbits. Like Sedna and 2012 VP113, 2015 TG387 is too far out for that. But all three of those objects have similarities in their orbit that point to something big—what, exactly, is yet unknown—affecting their orbits.

“For sixty years Pluto was the edge of the Solar System as we thought about it,” says Harvard astrophysicist Scott Kenyon, who was not involved in the current study. That’s all changed in recent years, he says, and Sheppard’s team is helping us to understand the true outskirts of our Solar System. Here’s are some answers about their newest find.

Compared to what the team has already found, The Goblin has “a much bigger orbit,” says Sheppard, “so it goes much further away from the sun than Sedna or 2012 VP113 go.” It takes about 40,000 years for the dwarf planet to orbit our star, and it was lucky that Sheppard’s team was looking at the right moment to spot it.

Normally, Sheppard says, objects out that far are significantly affected by stuff outside our Solar System. “The Goblin’s unusual because that doesn’t seem to be happening,” he says. Using what they knew of its orbit, “we ran a bunch of simulations and determined that the outside forces do push it around a little bit,” he says, “but it’s… not that significant.” That means The Goblin is a perfect object to use as a “probe” to look at what else is going on in the Oort Cloud. This far-out region of the Solar System is still influenced by our Sun, but we don’t know much about what’s out there. Astronomers can observe the movement of objects like The Goblin and model what else might be out there affecting their orbits.

Because the object is so faint, Sheppard says, astronomers don’t know much about it. “We don’t know if its surface is as white as snow or as dark as coal,” he says. “Because it’s on the small end it’s not substantive enough to have a substantial atmosphere,” he says.

The spooky title is just a nickname, says Sheppard. His team had been monitoring the object for a while, but it was near Halloween 2015 when they finally assessed that its orbit never brought it within the range of known planets, so it was significant to them. Because “2015 TG387” is awkward to say, they took the letters and went with “The Goblin.” That’s not its final name, though. “It’ll have to be officially named in the future, which would… probably be based on some kind of mythology from the past,” he says, like most celestial objects.

What does its discovery mean for our understanding of the solar system?

Peering into the far reaches of our Solar System could also allow us to look at its past. Our current understanding is that the planets formed from a nebula of materials surrounding the Sun newborn sun. Eventually, all the dust and gas gathered into the planets as we know them. But the current model would have no explanation for the theoretical large mass that seems to be affecting the orbits of The Goblin and its faraway colleagues.

If “Planet X,” as it’s nicknamed, was found, “it would show that our Solar System formed in a very chaotic environment,” Sheppard says. That’s because it’d be so far away from the Sun, and scientists would have to figure out how it got out there.

Planet X, also known as Planet Nine, would explain the orbits of The Goblin and its two colleagues. At their distance from the Sun and the large planets we know about, you’d expect the orbits of all three to be random, says Kenyon. He was not involved in the current study. But although they are very eccentric—meaning non-circular—none of them seem to be. “We’d like some explanation of why they’re not random,” he says.

The hypothesis that he thinks most likely is that there’s another large planet out there in the Oort cloud, which those objects are all being influenced by. That would be Planet Nine. But whether or not it’s out there, he says, The Goblin and the other dwarf planets provide “a better idea of what the proto-solar nebula was like four billion years ago.”

Is The Goblin unique?

2015 TC387 has the biggest orbit that we know of, but that doesn’t mean there aren’t more of its kind out there. “I think most astronomers suspect that the Oort Cloud may be full of all kinds of dwarf planets,” Alison Earnhart, a Juniata College physics instructor, told Popular Science in an email. There might also be some big ones out there, like Planet X, she wrote. But it’s one thing to suspect it and another to observe it, she says. “Goblin is another big step forward in our accumulation of evidence for what is contained in the Oort Cloud, which is still a very mysterious realm because it’s just so far away,” she says. Earnhart, who was not involved in the current study, says she’s excited about the new find.

Sheppard’s team is still searching the outer reaches of the Solar System for objects that could help us understand the story of that region—and pinpoint Planet X, if it actually exists. “It’s not a slam dunk [yet],” Sheppard says. They estimate they’ll need to find three further objects, doubling their current count, to establish whether they’re all being affected by a larger object out in the Oort. They’re currently watching a few, he says, but these things take time.