Sort of a two-birds-with-one-planet-sized-stone situation. 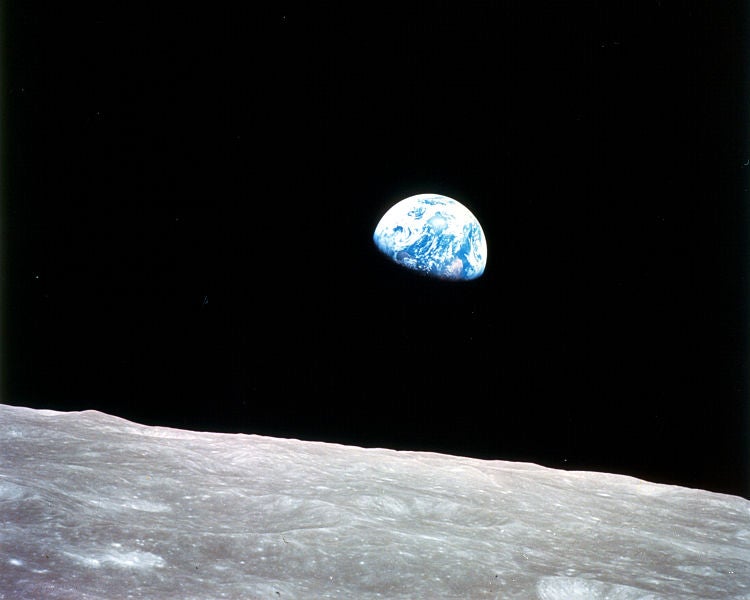 The Earth and its moon may be even more intertwined than we previously thought. NASA
SHARE

The origin of the moon and the origin of life on Earth might be more tied together than we once thought. New research published Wednesday in Science Advances suggests the cosmic debris that collided with Earth 4.4. billion years ago and created the moon was also responsible for delivering the most essential elements necessary for life to evolve.

“One of the greatest questions of humanity is whether we are alone in the universe,” says Rajdeep Dasgupta, a professor of earth, environmental, and planetary sciences at Rice University and a co-author of the new study. “To make life as we know it, critical chemical ingredients need to be available.” Hydrogen and oxygen are the most obvious elements since they can come together to make water, but other life-essential elements include carbon, nitrogen, and sulfur.

It’s never really been understood how these elements actually originated on Earth, but the predominant theory, explains Dasgupta, has always been been that they arrived to the planet via meteorite and comet impacts after the formation of Earth was largely complete. But there’s always been debate about the timing and scale of these impacts, due to unresolved questions raised by the concentrations of these elements throughout the Earth.

“What was previously thought is that the impacting materials were small, undifferentiated, primitive objects and not a planet-scale object,” says Dasgupta. But there was a problem: the ratio of carbon to other elements (like nitrogen and hydrogen) in these primitive meteorites was always much lower than what had been measured in the non-core material of the Earth (also known as the silicate Earth).

As the team pondered this enigma more and more, they began to settle on a new hypothesis: these elements were brought to Earth by a planet-sized object with a sulfur-rich core. The geochemical processes that grow a planet from a sulfur-rich core encourage carbon and nitrogen to move away from the center and out toward the surface. This would help explain why, after a collision between this planet-sized object and the Earth, our planet would be left with much larger fractions of carbon and nitrogen within the silicate.

“In other words,” he says, “we were trying to answer whether there is one single delivery mechanism that can explain the relative budget of all elements essential for life on Earth.”

Laboratory experiments that simulated the high-pressure and high-temperature conditions of sulfur-rich planetary core formation supported this idea. Concentrations of carbon and nitrogen would not be sequestered into a metallic core rich in dissolved sulfur, but instead preferentially move out toward the silicates found in the outer layers of an early planet.

Such a planet would be a perfect vehicle for bringing these volatile materials to Earth if it managed to smash into it. The team ran over a billion computer simulations that emulated what we know about the history of the solar system. The most probable scenario is that a planet with a sulfur-rich core (similar to the size of Mars) slammed into our world to give it the carbon and nitrogen concentrations found in the silicate Earth—which later helped jumpstart the evolution of life.

Moreover, the scale of such an impact would basically match that of a moon-forming collision as well.

“We connected the dots,” says Dasgupta. “Given we are suggesting that carbon, nitrogen, sulfur were established through one of the last giant impacts, it makes sense if the same impact also likely formed the moon.” That explanation also helps further explain the sort of broad geochemical similarities shared by Earth and the moon.

Of course, there is currently no way to prove whether or not this latest theory is true. All of that will be determined by the collection of more geochemical data that either fits the model, or disputes it. Dasgupta also adds that this investigation did not explicitly deal with whether the moon-forming impact had anything to do with the origins of water to Earth, which is its own area of intense research. Carbon, nitrogen, and sulfur are just a few of the building blocks that allow for life on Earth, and the mystery of water is a whole other question that needs to be addressed.

Nevertheless, while the findings may illuminate how life on Earth originated, the more exciting implications extend to what they mean for the search for extraterrestrial life. “In terms of its habitability or chemical habitability, a rocky planet need not have all necessary elements to produce and sustain life from its origin,” says Dasgupta. “It could undergo giant impacts from other planetary bodies that can alter its composition and make it more viable for hosting life.”

As we find more and more potentially habitable exoplanets, we’ll need to decide which worlds deserve more of our attention and which have a higher likelihood for hosting life. Part of that decision-making may come down to understanding which planets have a bigger history of impacts that could have delivered life-essential elements to the surface, ready to be used in chemical reactions that ignited the evolution of life.

Who would’ve known the same violent cataclysm that birthed the moon may have laid the groundwork for the birth of terrestrial life billions of years later?