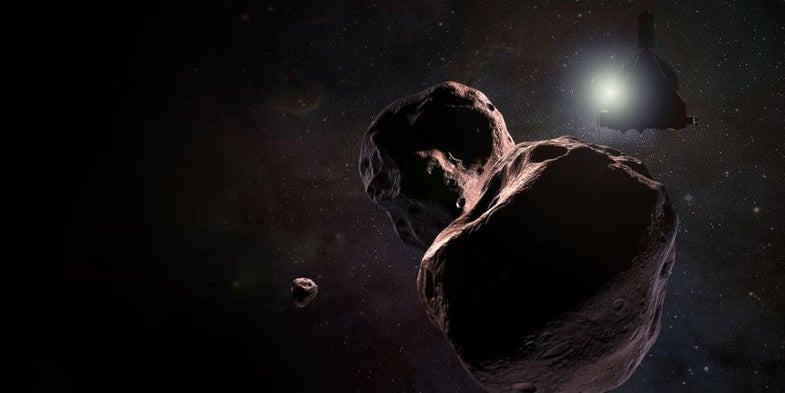 An artist's impression of 2014 MU69, which might actually be two rocks moving in tandem. NASA / JHUAPL / SwRI / Steve Gribben
SHARE

Scientists around the world are spending New Year’s Eve waiting to hear news of a historic space event. NASA’s New Horizons, famous for visiting Pluto for the first time ever back in 2015, is making a second splash with a flyby of 2014 MU69, an object a billion miles beyond Pluto and 4.1 billion from Earth itself. If New Horizons is successful, this encounter will represent the most distant object ever explored by a visiting spacecraft.

Unofficially known as Ultima Thule, the rock—which may actually be two rocks moving together in tandem—sits in a distant region of cosmic cold-storage called the Kuiper Belt. Because of the temperature and lack of direct sunlight, the objects therein are much unchanged from their makeup in the earliest days of the solar system. Researchers hope that studying these distant bodies can help us better understand what building blocks were present when our Sun was brand new, and how and why these pieces came together to form planets. A better grasp of this process will help us understand our origins, but it could also give us insight into how the planetary formation process might differ under slightly (or extremely) different circumstances—thereby helping us determine where, when, and how habitable planets are most likely to form.

“Because of where it was formed and the fact that Ultima is not large enough to have a geologic engine like Pluto and larger planets, we expect that Ultima is the most well-preserved sample of a planetary building block ever explored,” Principal Investigator Alan Stern wrote in a recent blog post. “In effect, Ultima should be a valuable window into the early stages of planet formation and what the solar system was like over 4.5 billion years ago.”

New Horizons is expected to pass within about 2,200 miles of Ultima Thule, which is three times closer than the spacecraft’s approach of Pluto. You’ll be able to watch the mission team at NASA Johns Hopkins APL track a simulated countdown of the closest approach (at 12:33 a.m. Eastern Time on January 1) in the live stream below:

Live coverage of the actual signal acquisition is scheduled for 9:45 a.m. Tuesday, with a press briefing on the spacecraft’s status set for 11:30 a.m. It’s possible we’ll have images to look at during that briefing, and more should arrive online on January 2. We’ll be posting more on the mission as updates come in!

New Horizons has been in ‘Encounter Mode,’ or EM, since December 26. This means that if anything goes wrong during its flight, it will immediately use its software to try to correct the problem instead of phoning home to Earth. That might sound risky, but it’s necessary: messages from New Horizons to Earth take six hours each way because of the spacecraft’s great distance from home, so if the robot followed its usual procedures and froze up to ask for help, we could totally miss our chance to record data on MU69 before we even knew there was a problem in need of solving. Everything looks good for a successful flyby, but nothing will be certain until New Horizons calls to wish NASA a happy new year.