More than a light Venusian breeze. 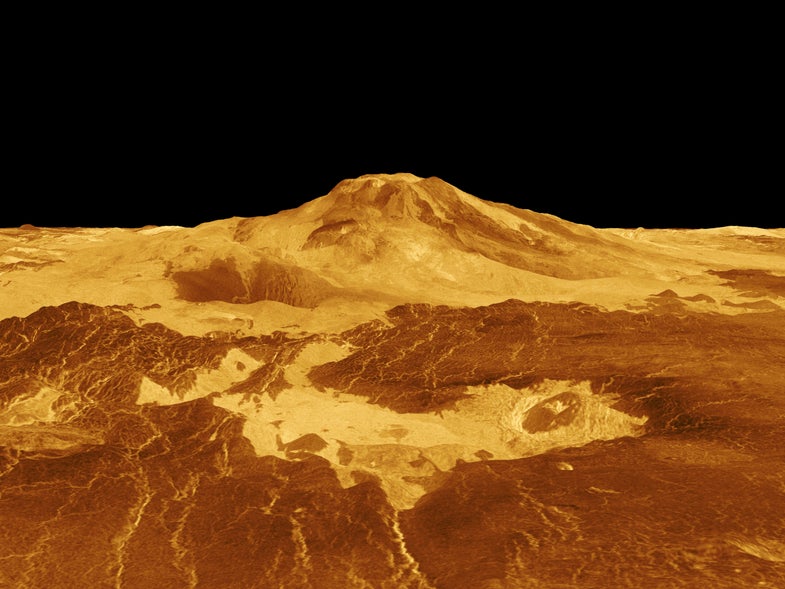 Venus’ rotation has always been weird. While it completes an orbit around the sun in the equivalent of 225 days on Earth, it takes around 243 Earth-days for the solid part of the planet to make one complete spin around its axis. And that’s far from the oddest thing about it. One of the oddities is that the 243 day rotation of Venus’ solid surface isn’t quite exact. Estimates of its rotation have changed over time, much to the puzzlement of scientists.

Now researchers think they know why. In a paper published this week in Nature Geoscience planetary scientists working with data from Japan’s Akatsuki mission found that Venus’s rotation might actually change over time, thanks to the push of the atmosphere against the planet’s mountains at certain points in the rotation.

“In the past we had different estimates of the rotation rates, but something that was a bit strange was that you had different measurements that did not match,” says Thomas Navarro, a postdoctoral researcher at UCLA and lead author of the paper. “One possibility was that there were fluctuations in the rotation rate. We suspected for a long time the atmosphere to be one of the reasons explaining the change in the rotation rate. However we did not know exactly by what kind of process it would happen. Here, with mountain waves, we provide one explanation.”

Researchers working on Akatsuki first noticed a feature in Venus’ atmosphere back in December 2015, a standing wave that always showed up over mountains on the surface.

While the solid planet takes around 243 days to make a complete orbit, Venus’ atmosphere makes a full circuit of the planet every 4-5 days, something that scientists refer to as superrotation. The atmosphere moves so quickly because its winds only blow in one direction—west. That means that when the waves hit something (a mountain range near the planet’s equator, for instance) the winds flowing past can balloon into a massive wave in the skies above.

These are called gravity waves. They have nothing to do with colliding black holes or neutron stars. Those events create gravitational waves which can only be seen with highly advanced detectors. Instead, atmospheric gravity waves, sometimes referred to as mountain waves, occur when something (like a mountain) forces air upwards, with that air eventually pulled down by gravity. These waves happen on Earth, but aren’t nearly as dramatic—our windy planet never lets the waves get too big, as they break soon after they are born.

“On Venus the size of this wave is really, really big, it’s huge, it’s 10,000 kilometers [6,214 miles] wide, whereas on Earth it remains much smaller and more local,” Navarro says. “The reason for this difference in size is that on Venus you have wind that almost never changes direction. On Earth you can have winds blowing westward or eastwards, whereas on Venus it is always the same”

Navarro and others took the Akatsuki data and fed it into an atmospheric model, finding that when the wave is active it’s strong enough to tug on the planet and briefly change how fast it rotates by as much as a few minutes.

Now, this doesn’t mean that Venus is constantly accelerating, or constantly decelerating for that matter. Here’s where Venus’ rotation gets even stranger: Because it takes longer for Venus to spin on its axis than it does for it to orbit the sun, and because it rotates backwards, from east to west, Venus’ day-night cycle doesn’t line up with its rotation at all. Instead, it takes about 117 Earth days for the planet to complete a day-night cycle, also called a solar day.

This is important to the rotation, because the mountain wave that tugs on the planet only appears during a Venusian afternoon, which lasts for about a month. The rest of the time, the planet returns to its resting rotation rate.

Now, this is only one potential explanation for the varying rotation rates. Another explanation, which could work in concert with this theory, is that the rotation might change thanks to the tidal pull of the sun on the solid planet. To know for sure what’s going on, researchers will need more data.

There are a lot of proposed missions to Venus, including Venera-D (a joint U.S.-Russia collaboration), the European orbiter ENVISION, and multiple U.S.-based missions, but none have yet gotten the green-light (and funding) to head for the planet.

Understanding more about our neighboring planet could help solve some of those unanswered questions that Navarro and others are working to answer, but it could be useful for other astronomical research, too.

“We need to explore Venus because it’s a prototype for exoplanets,” Navarro says. “In the next year, as we go to gather more and more observations of exoplanets and potentially habitable exoplanets, many of these planets we’re going to see are going to be very bright objects like Venus. In order to understand if the exoplanets we are going to observe are more like Earth or more like Venus we need to investigate why it is the way it is today, and why it is so different from Earth.”