Newly discovered exoplanet may be a ‘Super Earth’ covered in water 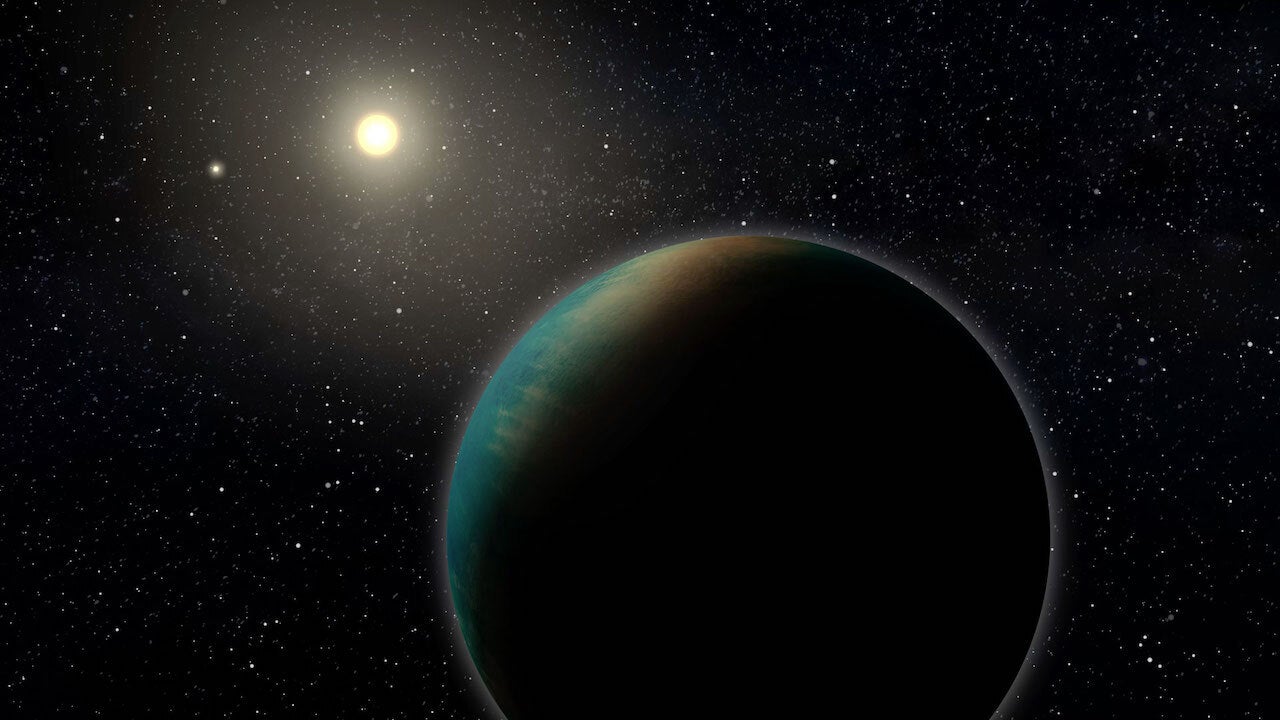 Artistic rendition of the exoplanet TOI-1452 b, a small planet that may be entirely covered in a deep ocean. Credit: Benoit Gougeon, Université de Montréal.
SHARE

An extrasolar planet named TOI-1452 b was recently discovered by an international team of researchers led by Charles Cadieux, a graduate student at the Université de Montréal and member of the Institute for Research on Exoplanets (iREx). Their findings on this possible “Super Earth” were published in The Astronomical Journal.

According to NASA, extrasolar or exoplanets are any planets beyond our solar system. Most exoplanets orbit other stars like Earth does with our sun, but free-floating exoplanets (or rogue planets) orbit the galactic center and are untethered to any star. TOI-1452 b is about 100 light-years away from planet Earth and is orbiting a red dwarf star in a binary star system located in the Draco constellation. It is slightly bigger than Earth in both in size and mass and is potentially rocky.  TOI-1452 b’s temperature is what Goldilocks would call “just right,” since liquid water could exist on its surface due to the planet’s distance from its star.

The team believes that TOI-1452 b could be an “ocean planet.” These types of moist celestial bodies are completely covered by a thick layer of water, like some of Jupiter’s moons and Saturn’s moons. According to astronomers, some of the recently identified exoplanets have a density that can only be explained if a large fraction of their mass is made up of lighter materials than the ones that make up the internal structure of the Earth. Water is the primary suspect.

“TOI-1452 b is one of the best candidates for an ocean planet that we have found to date,” Cadieux said in a statement. “Its radius and mass suggest a much lower density than what one would expect for a planet that is basically made up of metal and rock, like Earth.”

Two experts in exoplanet interior modeling (Mykhaylo Plotnykov and Diana Valencia of The University of Toronto) analyzed TOI-1452 b and their modeling shows that water may make up as much as 30 percent of the planets mass.

The team first got on TOI-1452 b’s trail through NASA’s Transiting Exoplanet Survey Satellite (TESS), a space telescope that searches the entire sky for planetary systems close to our own. According to the study, the TESS signal showed a slight decrease in brightness every 11 days, leading astronomers to believe that the exoplanet is about 70 percent larger than Earth due to this quick orbit time. According to NASA, one “year” on TOI-1452 b is only 11 days, since it takes that amount of time to orbit its star. The red dwarf star is smaller and cooler than our sun, so TOI-1452 b receives about as much light as what Venus gets from the sun. Cadieux and a group of astronomers follow-up TESS observations with ground based telescopes to confirm the planet type and other characteristics.

“I’m extremely proud of this discovery because it shows the high calibre of our researchers and instrumentation,” said René Doyon, Université de Montréal Professor and Director of iREx and of the Observatoire du Mont-Mégantic (OMM) in a statement. “It is thanks to the OMM, a special instrument designed in our labs called SPIRou, and an innovative analytic method developed by our research team that we were able to detect this one-of-a-kind exoplanet.”

[Related: Some exoplanets tilt too much, and it’s pushing everyone apart.]

More follow up is needed to confirm theories on the planet’s density and status as an ocean planet. Scientists say it might also be a huge rock, with little or no atmosphere or even a rocky planet with an atmosphere made up of hydrogen and helium. TOI-1452 b is perfectly positioned for further study by the recently launched James Webb Space Telescope. It’s only 100 light-years away (fairly close in astronomical terms). Its brightness should allow Webb to capture a spectrum of starlight shining through its atmosphere. These spectrums are kind of like a fingerprint of what makes of its atmosphere. Its position in the Draco constellation is also one that Webb can observe almost any time of year.

Since exoplanets are an emerging area of discover, The International Astronomical Union is launching the NameExoWorlds 2022 Competition to give the public a chance to name christen some of the first exoplanetary systems to be seen by the Webb telescope.