Meet Farout, the new most distant member of our solar system

It's the farthest object we've ever spotted in our neighborhood. 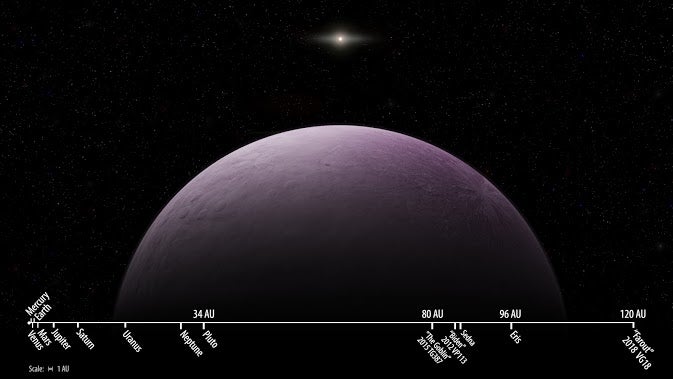 Say hello to 2018 VG18, the most distant solar system object ever spotted. Nicknamed “Farout,” it’s about 120 to 130 astronomical units (AU) from the sun (where one AU is equal to the 93 million miles between the star and our home planet, because humans are self-referential like that). For reference, Pluto—commonly introduced to students as one of the most distant planetary objects in the solar system—is a measly 34 AU away, hardly scratching our cosmic neighborhood’s outer fringes. 2018 VG18 also beats out Eris, the dwarf planet infamous for inspiring Pluto’s status demotion, which previously held the record at 96 AU from the sun. The Voyager 2 spacecraft, which just exited the heliosphere (though not the solar system itself) is about the same distance as 2018 VG18. Our sun’s most distant orbiting comets, which mark the edge of the system, reach some 50,000 AU away.

Researchers first spotted 2018 VG18 on November 10, using the Japanese Subaru 8-meter telescope located atop Mauna Kea in Hawaii. “We immediately knew it had to be very distant to have such slow motion across the sky,” says Scott Sheppard, an astronomer based at the Carnegie Institution of Washington, part of a trio of North American scientists who made the discovery. The object was re-observed just this month, using the Magellan telescope at Carnegie’s Las Campanas Observatory in Chile.

Right now, we don’t know a whole lot about what 2018 VG18 really is, except that its “Farout” nickname won’t be changing any time soon. Besides its distance, the team deduced the object is about 500 to 600 kilometers in diameter (about 310 to 370 miles), takes more than a thousand years to orbit the sun, is solid, and emits a pinkish hue—generally a sign of ice irradiated by the sun’s rays over billions of years. “The size of the 2018 VG18 would make it a dwarf planet,” says Sheppard, “as it is large enough that gravity should dominate over any material strength of the object, making it spherical in shape.” So far, however, a formal dwarf planet label is still pending more observations, and for right now, we should think of 2018 VG18 as something like an asteroid.

The object wasn’t really much of a surprise for the team, who are in the midst of one of the largest and deepest searches for distant solar system objects ever. “We observe at all times of the year and from both the southern and northern hemispheres,” says Sheppard. “So this wasn’t a serendipitous discovery, as it is exactly what we are looking for—solar system objects that are way, way out there, far beyond Pluto.”

Of course, that doesn’t mean that the team just focused some high-powered instruments to the far reaches of the solar system on a lark. The edge of the solar system itself is about 122 AU from the sun, and there have always been signs that objects with other orbits could traverse this distant plane of space, according to Dave Tholen, an astronomer at the University of Hawaii and a co-investigator of discovery. “One way to think about it,” says Tholen “is, if there weren’t any suspicions, then why would we have bothered to look in the first place?”

These discoveries are pretty neat on their own, but they may lead to a more tantalizing discovery that the astronomical community has obsessed over in last few years: the search for Planet 9 (also known as Planet X). The Goblin and Biden, for instance, have orbits that seem to be influenced by a massive object the likes of would-be Planet X.

2018 VG18 could be shepherded by Planet X in the same way and help astronomers finally pinpoint the location of the elusive super-Earth, but that’s going to require a few more years of data thanks to 2018 VG18’s incredibly slow orbit.

The new discovery also serves to underscore the sheer impact better technology has on this sort of research. “Modern technology is now allowing us to explore the fringes of our solar system far beyond Pluto,” says Sheppard. The advent of large digital cameras on high-class telescopes means an ability to image the sky like never before. “We could not do this project until now.” And if the project finally gives us confirmation that Planet X is real, so much the better.