These honeybees have a surprisingly fierce battle cry 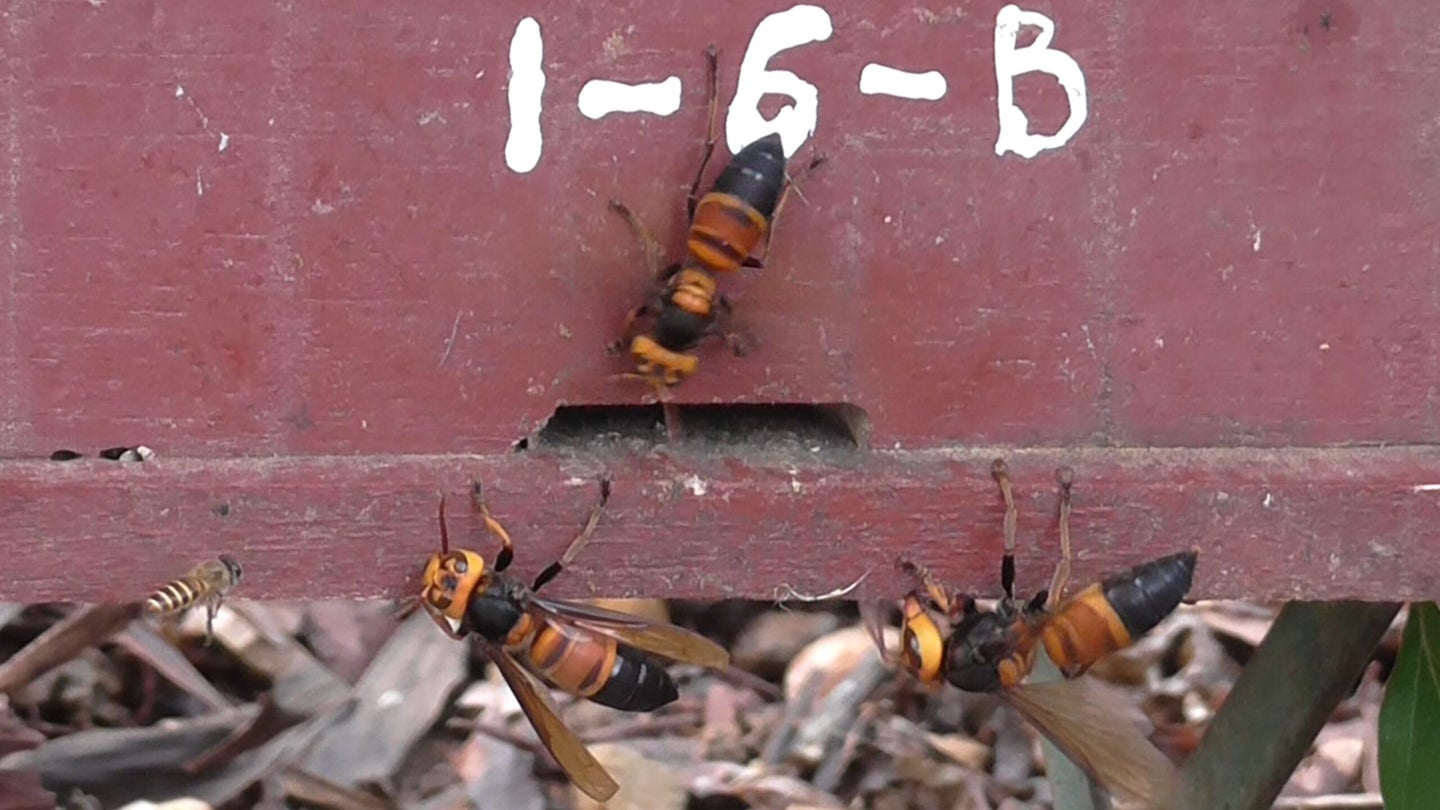 To cope with the threat of marauding hornets, honeybees in Vietnam have developed a distinct, siren-like noise that serves to marshal the hive’s defenses, scientists reported this week.

Scientists recorded honeybee hives during times of peace and in the midst of hornet attacks, and discovered that the arrival of the winged predators triggered a cacophony of noise and activity. Particularly striking was a harsh sound that changed pitch quickly and unpredictably—qualities also heard in the alarm shrieks, fear screams, and panic calls of mammals and birds. At the same time, worker bees began assembling at the entrance of the nest to repel the invaders.

Across the animal kingdom, abrupt sounds that change dramatically in frequency are used as alarm calls because they’re so hard to ignore, says Heather Mattila, an entomologist at Wellesley College, who published the findings on November 9 in the journal Royal Society Open Science.

“You never get used to them; they always grab your attention because they sound a little bit different every time,” she says. “It’s really interesting to see that the ways bees do this share a lot of the same traits with the ways mammals do it too, including ourselves.”

The Asian honeybees that she and her colleagues observed are more petite and live in smaller groups than the European honeybees commonly kept for their nectar. “They’re small and quick, and that’s because in Asia they face these really numerous hornet predators,” Mattila says. These include Asian hornets (Vespa velutina), which are solitary hunters that hover in front of nests to pick off individual bees.

The deadliest threat, however, comes from the giant hornet species known as Vespa soror, which resembles its close relative the so-called murder hornet (Vespa mandarinia). These insects attack in groups capable of decimating entire honeybee colonies.

It all starts when a hornet scout finds a beehive and returns with reinforcements. After slaughtering the defending bees, the hornets take over the nest and feed any eggs and larvae they find inside to their own hungry offspring. “It’s kind of a brutal scene, because these giant hornets are really focused on finding a lot of food quickly and honeybees are a great target for that,” Mattila says.

But honeybees have a few tricks to help them fight back. When an Asian hornet approaches, the bees gather outside in a group and shake their abdomens back and forth, apparently to let the hornet know it’s been spotted and can’t sneak up on them.

[Related: Murder hornets are officially here, but don’t freak out yet]

Unfortunately, this move doesn’t work on giant hornets. “They’re not afraid of bees,” Mattila says. “They’re much larger, they’re heavily armored.” They do seem to have an aversion to animal dung, though, which the bees smear around their nest entrances as a deterrent.

Another nifty home security system  is known as bee balling. This tactic involves hundreds of bees working together to engulf an unlucky hornet, causing it to simultaneously overheat and suffocate.

Mattila and her colleagues were studying these defenses in Vietnam’s Hanoi Province when they noticed that the honeybees also made quite a racket whenever giant hornets struck. “You could stand a couple feet away from a hive and hear the sounds the bees were making,” she says. “The bees sounded very upset, very distressed and agitated.”

The researchers decided to record the insects with microphones and video cameras under several different scenarios. These included times when hornets were absent, during the course of genuine Asian hornet and giant hornet attacks, and experimental sessions in which the team presented the bees with the scent of pheromones giant hornet scouts use to mark nests for destruction.

Even when the honeybees weren’t being harassed by hornets, the researchers noted, the hive was a bustling place. The bees used a variety of signals to communicate with each other, including several kinds of sounds made by vibrating the wings and thorax very quickly. This technique, known as piping, produces vibrations that the bees perceive through sensors in their legs. “Rather than hearing it with their ears like we would, they would feel it with their legs,” Mattila says.

The bees became noisier and signaled more frequently during skirmishes with Asian hornets and when the scent of giant hornets was present. However, during actual giant hornet assaults, the hive became downright frenzied and “got extremely loud,” Mattila says. When listening to an audio recording of the hive, she says, she could always tell when a giant hornet had shown up. “The bees would just go nuts.”

Part of the reason for this, she and her team realized, was that the giant hornets provoked a kind of piping from the bees that hadn’t been documented before, which the researchers referred to as antipredator pipes. “They make them in rapid series, and so it sounds like a siren that’s going on and on and repeating,” Mattila says. “They change a lot in tone; they’re really harsh and noisy.”

While piping, the honeybees also raced about, buzzed their wings, and raised their abdomens to reveal a pheromone-producing gland. This could mean they were warning the hive of danger through multiple senses.

“Our hypothesis is that the sound is like, ‘the hornets are here,’ and the smell is like, ‘everyone come and gather at the entrance to start defending,’” Mattila says. “At this point we know that these things are linked: the hornet shows up, the bees make the sound, and also, at the same time, a lot of bees start showing up outside the colony and getting ready for defense.”

“We don’t know if it’s the giant hornets—the fact that they’re this particular species—or just that they’re big, or that they get right up to the entrance,” Mattila says. “But something about how they attack makes the bees inside produce this really urgent sound.”