Step inside the Belvedere. 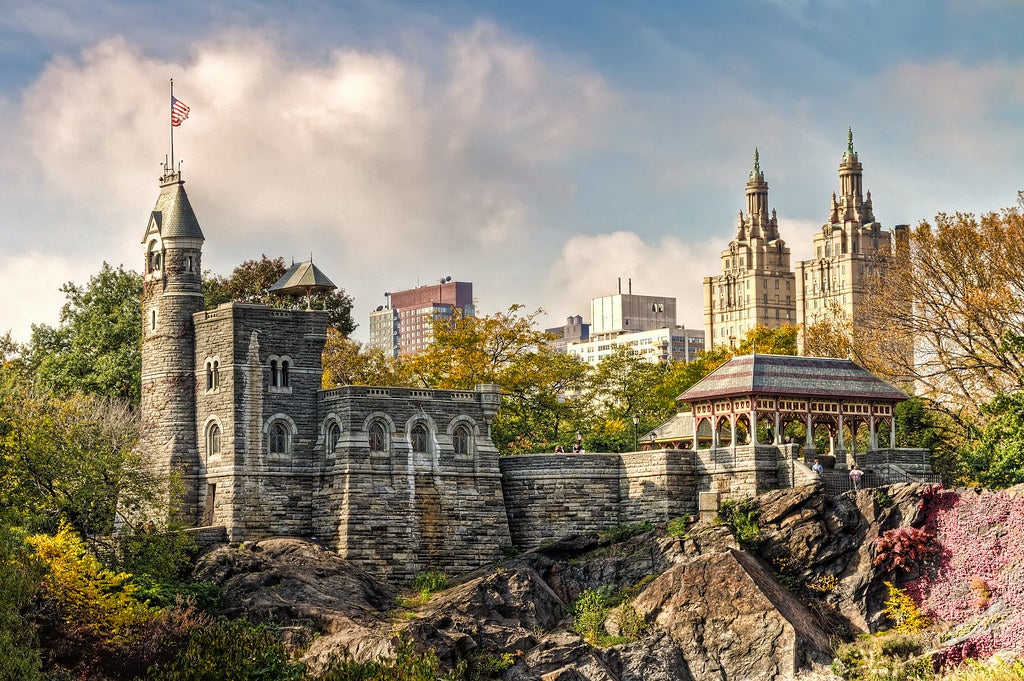 When Central Park’s master planners Frederick Law Olmsted and Calvert Vaux drew up the initial design for the Belvedere in the 1860s, their real focus was on the scenery. Belvedere, in Italian, means “fair view,” and it was. The rocky little castle, part granite and part Manhattan schist, was a folly; a decoration instead of a building, it lacked both windows or doors. The “whimsical structure” looked out over an enormous reservoir, where the city stored fresh water from upstate.

But the last 150 years have changed the city, its favorite park, and the castle nestled inside. A recent restoration effort by the Central Park Conservancy outfitted the structure with better windows, doors, and on-site geothermal energy to guard against decay. The reservoir has long since been drained and replaced with the Great Lawn. And perhaps the Belvedere’s most surprising evolution is its second life as a high-tech weathervane.

The story starts in 1849. That’s the year the Smithsonian Institution in Washington, D.C. began collecting weather observations from volunteers around the country. Locals would send in their notes via telegraph, and headquarters would compile the data into weather maps and, eventually, predictions. Of course, armchair scientists had been doing this for decades in silos; Ben Franklin and Thomas Jefferson both made meticulous records of their local weather. But the Smithsonian showed just how much bigger the sum could be from its parts.

In New York City, individuals, schools, and hospitals contributed to the weather-collecting effort, says Christopher Stachelski, the region’s observational program leader for the National Weather Service. But Gotham lagged behind in uniting these disparate sky-gazers. It wasn’t until 1868 that Daniel Draper, a mustachioed tinkerer, founded the New York Meteorological Observatory, which he would lead for the next 44 years.

In the early years, Draper designed much of the observatory’s original weather-gathering equipment, Stachelski says, including its first set of thermometers, barometers, rain gauges, and wind equipment. He and his employees worked (and, Stachelski says, perhaps even lived) in the Arsenal, a fortress-like building that actually predates Olmsted and Vaux’s design for Central Park. Their shifts allowed them to gather observations 24 hours a day, 365 days a year. But changes were coming.

In 1911, Draper announced his impending retirement. After decades of independent collection, the New York Meteorological Observatory was absorbed by the National Weather Service, founded back in 1870. When rumors floated that the city would tear down the Arsenal, the Central Park scientists nonetheless relocated to the Belvedere. The city never did demolish the Arsenal; today it’s an art gallery. But at the time, Stachelski says, it was “disintegrating” due to a lack of weatherproofing and the researchers feared the integrity of their paper records, hastening the move.

To turn the breezy Belvedere into a workable office, the meteorologists installed windows and doors. To make space for wind monitors, they chopped the turret off the top of the Belvedere’s tower and placed the spindly white devices between the parapet walls. To record the temperature, they created a fenced-in pen for their equipment at ground level, nearby on Vista Rock. It wasn’t the most popular decision: In a 1922 New York Times story titled “Says Government Trespasses in Park,” an angry artist called it a “pig sty” and “an illegal invasion.” Today, there’s still such an area—a chain-linked plot of land, with a rich layer of soil to prevent the instruments from overheating, full of whirring machines. It’s with data from this spot (and the wind monitor that still sits on top of the building) that WNYC can share “the weather in Central Park this morning.”

For all its prominence in the public eye, Central Park was always a secondary site for the weather service. Since 1911, its main New York City observation center had been the Whitewall Building in Battery Park. (Previously, Fort Columbus on Governors Island, the Cooper Union, and the Manhattan Life Insurance Building had also sheltered equipment and staff.) But in 1960, the service moved to Rockefeller Center. They had ample administrative space, but no place to put their equipment. So the meteorologists decided to make Central Park the center of New York City weather observations.

Space constraints made this shift necessary, but sweeping technological advancements made it possible. For centuries, watching the weather had been a 24-hour manned operation. But by the 1960s, the devices could send their own data to headquarters. “They set up some equipment so it could create a read-out display at Rockefeller Center, so they didn’t have to be out there every day,” Stachelski says. Staffers would walk uptown to the park only when equipment needed maintenance, or seemed to be malfunctioning.

Things work similarly today. There’s an ice-free wind sensor, which Stachelski describes as three little barbs that stick up from a base and spin around to calculate wind speed and direction. There’s an electronic temperature sensor, an electronic humidity sensor, an automated rain gauge, a visibility sensor that can see 10 miles out, a weather sensor that detects things like smog and snow, and a celiometer that can analyze cloud height up to 12,000 feet. Engineers visit the site as needed, usually every few weeks or months. For the most part, though, the data is transferred automatically over a phone line to Brookhaven National Lab in Long Island, where Stachelski and his coworkers at the National Weather Service are now based. The only thing that’s still manual is measuring snow, which the New York City Parks Department performs “as a courtesy.”

“It’s been like that for two generations now, going on a third,” Stachelski says. “So that’s what most people really know as the New York City observation.”

Increasing automation has been great for weather-collectors all over the world. As Andrew Blum describes in his new book The Weather Machine, accurate data collection, speedy transmission, and analysis by supercomputers and even artificial intelligence makes our forecast so accurate and omnipresent, people really only talk about it when it’s wrong.

But the shift was hard on the Belvedere, which fell apart soon after the National Weather Service decamped to 30 Rock. The building was quickly covered in graffiti, its stony edifice left to crumble. The rest of the park didn’t fare much better. Without proper maintenance, lawns dried out and Olmsted and Vaux’s beloved buildings looked ramshackle, boarded up and abandoned. The park’s formerly sterling reputation as a shared space for recreation eroded until it was just another seedy place in a scary city. The entire era can be (and often is) summed up by a 1975 New York Daily News cover that read, “FORD TO CITY: DROP DEAD.”

This posed a problem not just to park lovers, but to the National Weather Service. While meteorologists have benefitted from rapid technological evolution, their science still demands consistency. But as the New York Times wrote in 1977, “vandals” were breaking in, pulling circuits, and damaging or stealing gauges. The agency was reportedly considering a total relocation, abandoning a site with decades of consistent records to secure a little peace and quiet.

Fortunately, around that time, the winds began to change. In 1980, concerned citizens founded the Central Park Conservancy, which has since raised $1 billion to restore and maintain the park. The Belvedere was a high priority project for the conservancy, which first renovated the space in 1983 (and again in 1995 and 2019). While its goal was to ensure a fair view exists for future generations, the conservancy ended up preserving a rare weather legacy in the process.

As Stachelski tells it, in the 1940s and 50s, as commercial aviation took off, most weather stations moved to local airports. (Find your hometown station on this interactive map from NOAA.) But a few cities kept their “downtown sites,” namely New York City, Baltimore, San Francisco, Atlantic City, and Charleston. While New Yorkers can get data from La Guardia, Newark, and Kennedy International Airports, the Belvedere offers urbanites something most Americans can’t get: 150 years of consistent insight into the heavens above.