If fruit flies live without sleeping, why can’t I?

From fruitflies and birds to humans, there’s debate in the scientific community about whether we’d die without sleep. 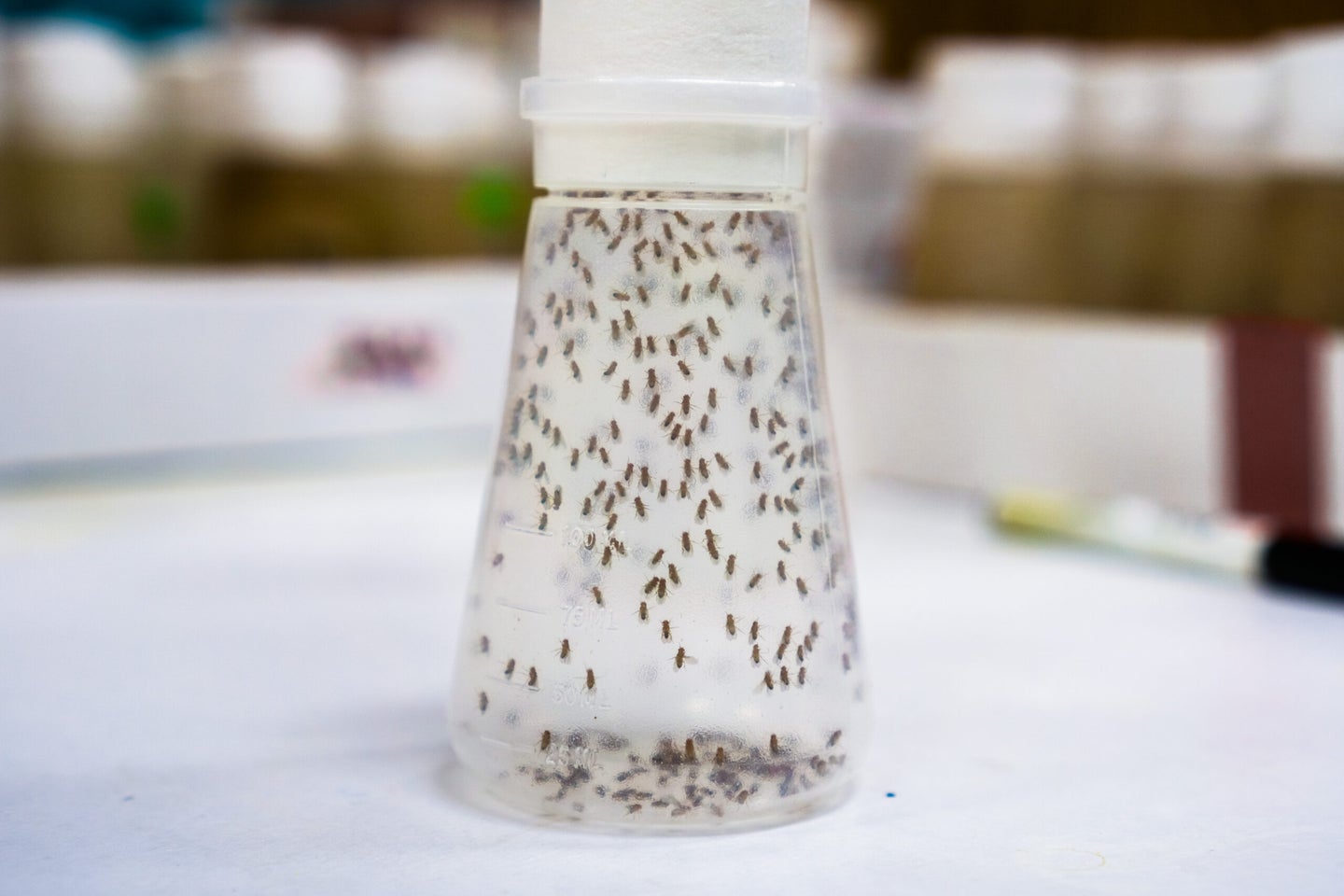 As anyone who’s ever pulled an all-nighter can attest, sleep feels pretty essential to life. While the field of sleep science has long thought that animals and humans would die without sleep, a growing body of evidence is calling that assumption into question. A new study of fruit flies from researchers at Imperial College London provides further proof that sleep isn’t as necessary for life as previously surmised.

“It’s been thought that [the need for sleep] has a similar architecture” to the need for food, says study author Giorgio Gilestro, a systemic biologist at Imperial College London. But in this new study, Gilestro and colleagues found that male flies deprived of sleep lived as long as regular fruit flies, while female fruit flies also deprived of sleep died earlier, but only by an average of three days. Three days is about six to eight percent percent of the 40 to 50 day lifespan of a fruit fly.

This study stands out because its methodology differs from other studies of sleep in fruit flies. “If the flies don’t actively walk, the commercial system that everybody else uses says they’re sleeping,” says Gilestro. But flies might be still for many reasons, like eating or cleaning themselves, not just sleep. His team designed a new apparatus for detecting these micromovements in flies. If a fly was inactive for more than twenty seconds, the apparatus rotated the tube it was in, waking it up.

With the twenty-second delay, “they’re still getting some sleep, for sure,” he says. But they’re not getting as much, and yet they seem to be doing okay. While this might sound improbable, it’s not unprecedented. “The scientific literature about whether animals actually need sleep is incomplete,” says Gilestro. Previous studies have relied on methods like startling animals to keep them awake, which are inherently stressful. While all the dogs, pigeons, rats, cockroaches and fruit flies in these experiments died, what killed them could well have been the stress of being kept awake, rather than the lack of sleep itself. For future research into whether sleep is actually necessary, he says, “it’s important to establish a paradigm that removes the stress as much as possible.”

That research would help scientists understand an important distinction: Contrary to what’s currently believed, it may be that sleep isn’t necessary for survival in the same way food is—in other words, animals can’t die of sleep starvation. Proving this, while methodologically difficult, could have implications for everything from conservation to the medical care of humans with sleep disorders.

The fruit flies that Gilestro’s team studied were safe in a lab environment. The team acknowledges that in real-world conditions, the flies may well not have survived because they were, well, sleepy. But some animals go long durations in nature without sleeping very much at all. In 2016, Niels Rattenborg and colleagues at Germany’s Max Planck Institute published a paper showing that some migratory birds can sleep in the air, but actually do so very little, only an hour a day. The new fruit fly research is “very exciting,” Rattenborg says, offering new information to figure out if sleep is as vital as food.

Even if sleep isn’t essential for life to continue, it may be essential for survival in the real world. Lack of sleep can come with life-threatening side effects like cognitive impairments. “I think sleep is keeping us alive in the sense that it allows us to function at a high level in dangerous situations,” says Rattenborg. Amount of sleep is still a question, though: the frigate birds he published on in 2016 were able to subsist on an hour a night and navigated their migration just fine.

It’s true that all animals, right down to the jellyfish, seem to sleep in some form, but there’s no way for the prevailing dogma to explain why some animals sleep a long time (think cats, who sleep for most of the day) and others sleep just a little (Mexican cave fish, for instance, sleep only two hours a night.) “There is no animal that needs to live the 24 hours we are given,” says Gilestro. Even for big, smart animals like elephants, size and intelligence isn’t a predictor of sleep needs: These pachyderms sleep just three to four hours per night.

Understanding sleep has implications for many fields of research. But thankfully, whatever the findings, you can still enjoy your eight hours.