Despite the challenges, it's still the world's highest weather station. 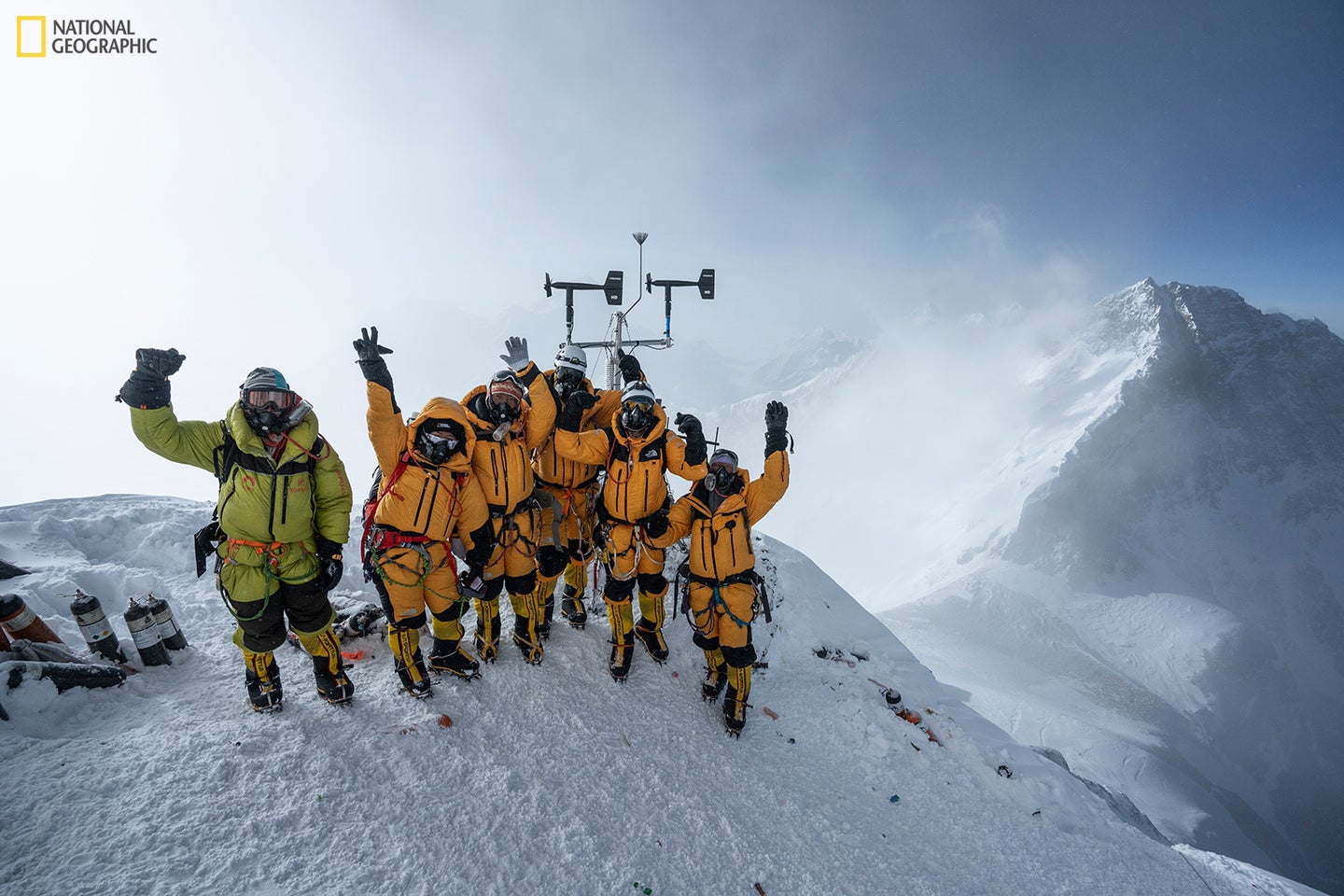 Perched at almost 28,000 feet on Everest, we paced back-and-forth, attempting to stave off frostbite as temperatures hovered close to -22 Fahrenheit and our drill batteries became too cold to work. Our ambition to install the highest automatic weather station in history looked destined for failure.

We were at the end of an almost two-month expedition to conduct a hugely ambitious scientific survey of the 29,000 foot Mount Everest. I am a climate scientist who specializes in extreme environments, and together with Baker Perry (a geographer at Appalachian State University), I was trying to install the highest weather station in the world.

Weeks of sickness had plagued the expedition (from diarrhea to full-on Influenza-A), but we had so far succeeded. Four stations were under our belt, including at Everest Basecamp (17,000 feet), and Camp II (21,00 feet)—perched high above the infamous Khumbu Icefall.

The day before we had celebrated installing the highest operating weather station in the world, near Camp IV at almost 26,000 feet. Only one team of Italian scientists had deployed equipment this high before.

Any celebrations, however, were short-lived.

We filled the rest of that day eating, melting snow, and sleeping, squeezing in about two hours of sleep before climbing out of Camp IV as midnight approached. We were determined to get our final station as close to the summit as possible, capturing the first continuous measurements of the weather in the thin air of the “death zone” above 26,000 feet.

Such data increases our understanding of the climates possible on Earth. Were we going to find the strongest near-surface winds on the planet? Just how cold and oxygen deprived is it up there during a winter storm? Could a human theoretically survive these conditions? Beyond this frontier meteorology and insight into life at the extremes, the station data could help improve weather forecasts on the mountain, hopefully making Everest climbers less susceptible to deadly surprises from extreme events.

Led by a superhuman Sherpa team from the nearby village of Phortse—carrying the disassembled weather station, other science equipment, and the normal climbing paraphernalia—we made good progress from Camp IV, climbing faster than we had all expedition. The atmosphere, however, was tense.

Above 26,000 feet there is little room for failure, and the 2019 spring climbing season provided too many reminders of our vulnerability. Unfavorable weather concentrated a record number of climbers into just a few days for summit attempts, making parts of the mountain unusually crowded. Tragically, many more climbers than normal would never make it back down alive.

Read more: Everest: 11 climbers dead in 16 days – how should we deal with the bodies on the mountain?

These crowds also impacted our expedition.

After around three hours of good progress towards the summit, we hit the back of a queue of climbers all clipped to the rope above. Our pace was cut by more than half. Hands and feet began to cool. The fear of frostbite grew. After hours more of shuffling, collective frustration was palpable. Our lead Sherpa (Panuru)—a charismatic veteran of 14 successful Everest summit—declared that we must reassess our options. So it was there, at Everest’s “Balcony” (27,600 feet), that we peeled off from the back of the pack and found a spot for the weather station.

Continuing any higher would have been a dangerous gamble against the odds. Ours was not a typical climbing expedition: we needed to perform hours of work on the summit and, given the slow progress, it was extremely unlikely our oxygen supplies would have lasted the round trip.

Our Sherpa team leapt into action at the Balcony. They had trained with us over the past two months for this very moment. For Baker and I this represented the climax of almost eight months’ preparation.

We were desperate when the drill (that was needed to help bolt the station to the rock) refused to be coaxed to life.

It was only with the sustained body heat from our warmest Sherpa that the batteries eventually warmed enough for the drilling and installation to commence.

The Sherpa were immense: a lifetime spent at high altitude meant they were quicker witted in the low oxygen environment, stronger, with hands more tolerant of the cold. It was thanks to their efforts that we successfully broke new ground with the installation of this weather station—nearly half a vertical kilometer higher than anything that had gone before.

Now safely back at sea-level, Baker and I have been watching the near-real time, satellite-streamed weather data with interest. We have already seen winds near Camp IV equivalent to a category 2 hurricane—and this is the period normally known for its settled weather.

These stations owe their severe winds to the subtropical jet stream—a high-altitude ribbon of fast-moving air which influences weather across large swathes of the Northern Hemisphere. Placing a weather station at such height means scientists can now monitor the jet directly and learn more about it. And the fact it is on the relatively well-trodden Mount Everest means passing climbers and Sherpas may be able to help with maintenance.

If the new weather stations can survive the extreme conditions long enough, we hope that they will also give us a more complete picture of the high-altitude Himalayan climate, including how it may be changing. This is urgent because it is here that glaciers—the source of freshwater to hundreds of millions of people—are retreating, and as we improve our understanding of the climate, we increase our ability to outline the changes (and challenges) that may be ahead.

There is of course much to do, with far more monitoring needed to understand the spatial diversity in climate and its rate of change across the Earth’s mountains. It is difficult and risky to install weather stations in high-altitude locations, but the stakes are now very high. As scientists we must therefore accept the challenge and continue venturing upward.

Tom Matthews is a Lecturer in Climate Science at Loughborough University. This article was originally featured on The Conversation.