Scientists thought they lost the world’s largest bee, but it was hiding in plain sight

This time, they GIFed it. 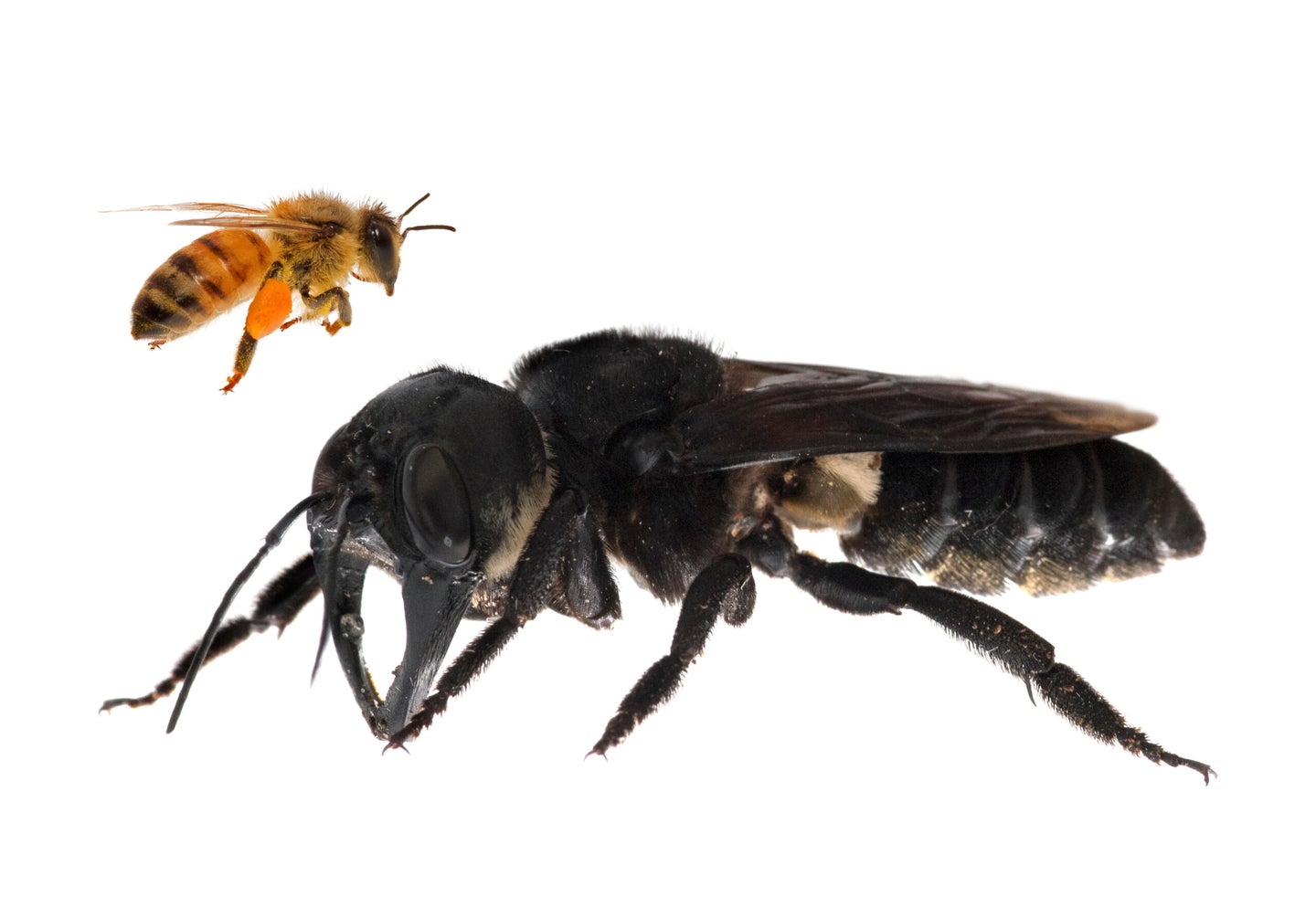 Losing important possessions is an unfortunate fact of life. One day it’s your car keys, the next it’s the world’s largest bee.

The bee species Megachile pluto was first described by legendary scientist Alfred Russel Wallace in 1859. But the little bug, commonly called Wallace’s giant bee, had been missing for so long scientists assumed it was extinct. But new photos, videos, and some truly haunting GIFs released on Thursday show the enormous insect thriving in its natural habitat, Indonesia’s North Moluccas islands.

You might wonder: How does one lose sight of a 1.5 inch-long bee species with a 2.5 inch-long wingspan and mandibles that would make even the meanest wasp quiver? Perhaps the only answer is that while this bee is big, the planet is even bigger.

From its initial discovery in 1859 until 1981, the gigantic bee was pretty much MIA. That year, entomologist Adam Messer finally laid eyes on the buzzing beast, providing essential proof of life for the species. While Messer did collect a specimen for preservation in a museum, the expedition was somewhat lacking in visual resources.

The world’s largest bee! ? Scientists thought “Wallace’s giant bee” had gone missing, but it was hiding in plain sight. How did they lose track of a bugger four times the size of the European honeybee, with mandibles that would make even the meanest wasp quiver? And how did @princeton biologist Eli Wyman track it down? Buzz on over to the #linkinbio for the full story ? @popsci ?: @claybolt

Eli Wyman, the Princeton University biologist behind the most recent giant bee research, was a little more media savvy. On his expedition to the North Moluccas islands, he brought along Clay Bolt, a natural history photographer who specializes in bee portraiture. Their Where’s Waldo? (but with black and yellow stripes!) result in some hair-raising imagery, mostly of the gigantic bee trapped in a little plastic tube.

Given we rarely see Wallace’s giant bees, let alone study them, little is known about their behavior. While the species’ jaws give the impression of carnivorous activity, it actually uses its mandible to scrape the resin off trees, from which it fashions termite-proof nests. Like its diminutive cousin, the European honeybee (which is just one-fourth the size), the giant bee’s harmless diet consists of nectar and pollen.

Wallace’s giant bees aren’t the only creature that’s risen from the dead this week. Scientists have presumed the Fernandina Tortoise, a native of the Galapagos, to be extinct since 1906. But a female turtle, identified as the long-gone Chelonoidis phantasticus was recently tracked down, healthy if a little underweight (low-veg volcanic islands will do that to you).

While such discoveries feel just as miraculous as discovering your keys were in your coat pocket the whole time, scientists stress that many plant, animal, and insect species are facing serious threats that could push them to real extinction. For every rediscovered Wallace’s giant bee, there’s a new study showing that biomass—that’s total weight—of the world’s creepy-crawlies is plummeting. And for every Fernandina Tortoise discovered alive, there’s a Lonesome George—another Galapagos native who, upon his death in 2012, was the last Pinta Island tortoise ever to amble across the Earth.

That’s the hard truth about loss. Sometimes, things are gone for good.