Is body paint a good insect repellent? The answer lies in this field of sticky mannequins.

Don't put the DEET down quite yet. 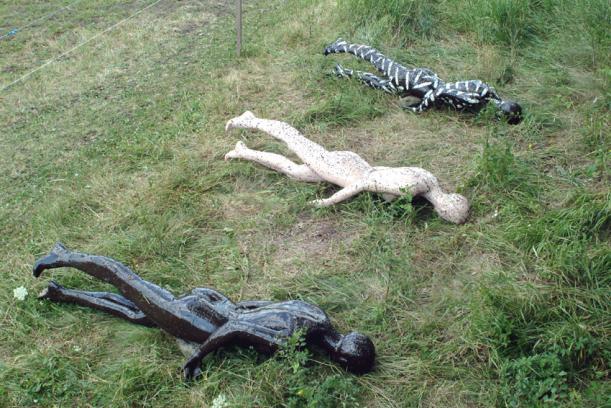 This trio of mannequins endured a layer of mouse glue and a hot summer of field tests in a Hungarian meadow. Gabor Horvath
SHARE

Many indigenous communities in Africa, Australia, and Papua New Guinea paint their bodies for culturally-significant reasons. Those locales also have notorious populations of bloodsucking insects like horseflies, ticks, and tsetse flies. One group of researchers thought the two might be related—could body paint provide any protection from those merciless pests? They decided to test it out.

To do so, the team painted three life-sized mannequins in different patterns. One was a homogenous dark brown, another dark brown with white stripes like a zebra, and the third was painted light beige to mimic fairer-skinned humans. Then, they covered the lifeless trio in mouse trap glue. That thin, odorless, transparent adhesive trapped any blood-sucking fly that decided to touch down on the mannequins’ “skin.”

In what looked like a modern art piece—or maybe the cover art for a bad indie record—the researchers placed the mannequins in a Hungarian field. Every two days, they’d come to the site and remove all of the trapped insects, counting the horseflies. They did this with the mannequins standing upright, and laying both face down and face up on the ground. They tested each position for roughly two weeks.

After crunching the numbers, they found that the fully-brown mannequin attracted ten times more horseflies compared to the one with white stripes. The light beige mannequin attracted just twice as many horseflies than the striped one. In astudy published Wednesday in Royal Society Open Science, the authors concluded that “white-striped body paintings, such as those used by African and Australian people, may serve to deter horseflies.”

That would be a very interesting result, if it holds true upon future scrutiny. Bloodsucking parasites like horseflies are inconvenient pests, and they’ve also been known to carry diseases like anthrax and Lyme disease. Plus, the result would make sense with previous research, which has shown that zebra stripes repel horseflies because they scramble the bugs’ vision.

But, the important question is: Can we actually translate this to real life?

For the most part, the closest Americans get to body painting from day to day is doing a Kardashian-branded full-body contour or an artfully precise cut-crease eye makeup. But body painting has been around for thousands of years. “Body-painting began long before humans began to wear clothes,” study author and University of Lund zoologist Susanne Åkesson said in a press release. “There are archaeological finds that include markings on the walls of caves where Neanderthals lived. They suggest that they had been body-painted with earth pigments such as ochre.”

And, of course, body painting has remained relevant in many cultures in more recent history. Some communities of indigenous Australian people, for example, paint their bodies as part of traditions related to religion, family, and social structure. And as pest and parasite populations boom and expand their range with climate change, more and more people will have to worry about protecting themselves from these bugs and the diseases they carry.

But the team’s methods leave something to be desired. As entomologist Phil Torres put it on Twitter: “Cool idea, some problems here.” Specifically, Torres wrote, “this study is solely based upon three sticky mannequins in a field in Hungary… it could use some replication to say the least.”

Sure, this study is a great (and entertaining) jumping-off point, but it’ll take a lot more mannequins, paint, mouse trap glue, and eventually real living subjects to say for sure how body paint can repel and attract bloodthirsty insects to human skin.