Abandoned or escaped non-traditional pets as the source of a growing number of ecological invasions. 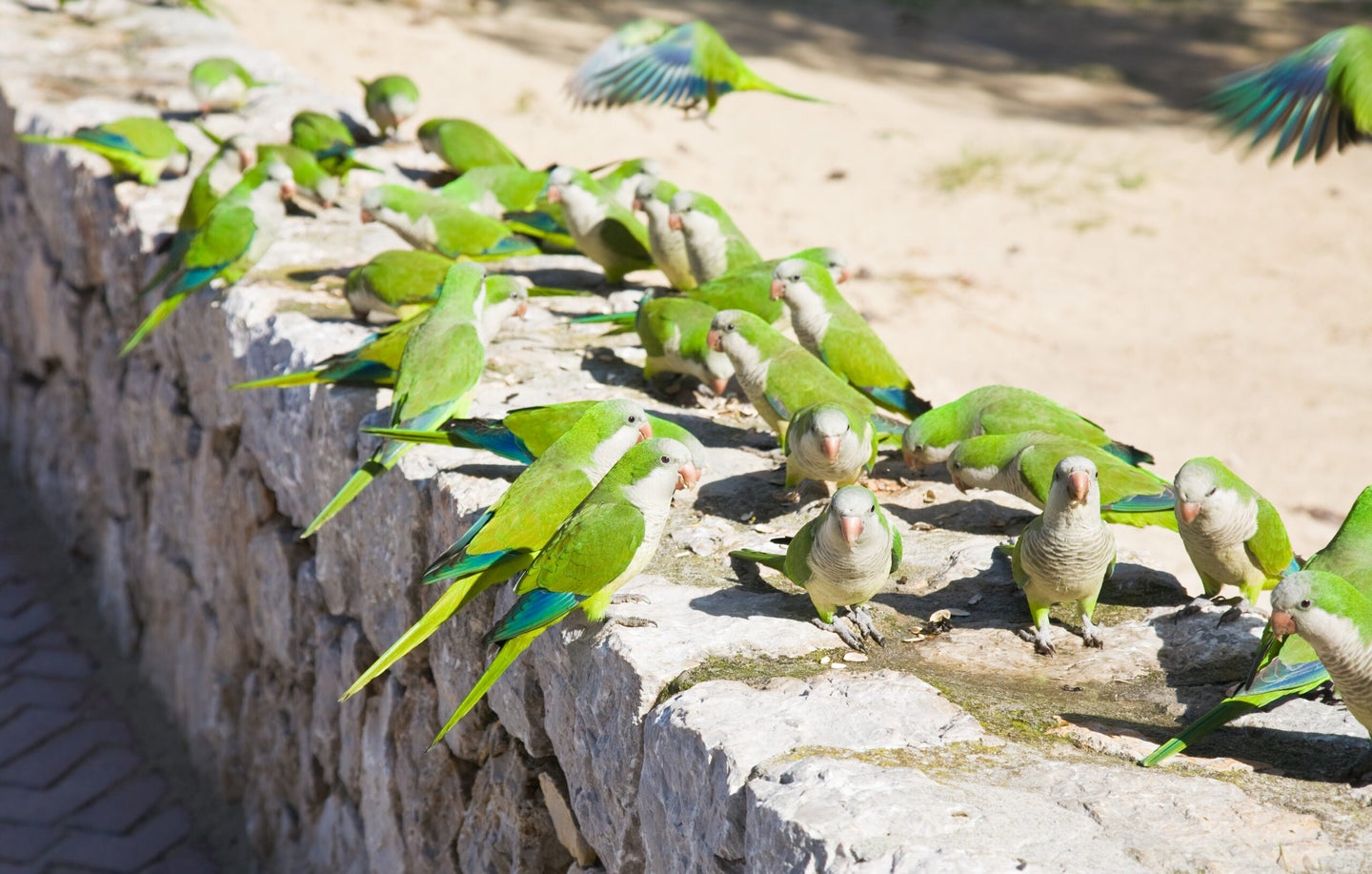 This past April, researchers captured and killed a record-breaking, 17-foot-long Burmese python in Florida’s Big Cypress National Preserve. She weighed 140 pounds and contained 73 developing eggs. The species can grow up to 23 feet in length and weigh 200 pounds, but this was the largest one ever removed from the area. It took four people to hold her up for a picture.

Until her death, she was one of the tens of thousands of invasive Burmese pythons in South Florida, according to estimates from the U.S. Geological Survey. The species, which is native to Southeast Asia and invasive in the United States, is decimating Floridian populations of furry mammals, wading birds and “even the occasional alligator.”

Ecologists suspect the Everglades’ first Burmese pythons were former pets released into the wild by their owners. That’s also how another invasive species, the spiny reef-predating Lionfish, was introduced to Florida waters. In fact, research suggests pet trade accounts for nearly 85 percent of the Sunshine State’s about 140 non‐native reptilian and amphibian invaders.

We tend to think of invasive species as interlopers that hitchhike to new places on ships or airplanes—but the exotic pet trade is a significant source of non-natives, according to a paper published this month in the journal Frontiers in Ecology and the Environment. And as pet snakes, lizards, birds, and fish grow in popularity, an uptick in invasive animals could follow.

“The Lionfish, the Burmese python, were probably the tip of the iceberg,” says Julie Lockwood, an ecologist at Rutgers University and one of the paper’s 16 co-authors. She says that the market for invasive pets has increased tremendously in the past few decades.

Florida alone abounds with examples of pets turned pests. In Coconut Grove, Fla., peacocks initially intended to ornament residential properties have multiplied—and, as the Miami Herald reported in 2017, the animals have gone on to peck, shriek, poop, and parade all over the now-divided neighborhood. In Florida’s Silver Springs State Park, an initial release of a half-dozen rhesus macaque monkeys by a tour boat operator in 1938 has grown into a current park population of 300 monkeys (which researchers estimate will double by 2022 if left unchecked). State officials are also concerned about Tegu and Nile monitor lizards, both of which are often kept as pets.

But it’s not just a Florida problem—nor is it a recent one, either. Around 1890, a group of American Shakespeare fans dedicated to bringing all the species mentioned in the Bard’s works to the U.S. released some 100 European starlings, a type of perching bird, in Central Park. By the early 21st century, that initial release had ballooned to more than 200 million starlings across North America, where they are supposed to have damaged billions of dollars-worth of agricultural crops and have occasionally snagged on airplane jet engines.

“The public perception of this issue is small,” says Julian Olden, a freshwater ecologist at the University of Washington who was not involved in the study. “But there’s a proven history of invasive species that have stemmed from the pet pathway.”

In the study, Lockwood and a team of ecologists and environmental economists describe how certain species are pulled into the exotic pet trade, and in turn, how some of those end up becoming problematic ecological invaders when enough owners let them loose intentionally or accidentally.

“It doesn’t take that many people,” Lockwood explains, “then bam, you have an invasive population.”

In the study, researchers noted exotic pet ownership has surged in recent decades. Today, about half of pets in the U.S. are considered exotic (not your typical pet dog, cat, guinea pig, rabbit, or hamster), according to the American Pet Products Association. Ownership of reptiles and amphibians more than doubled from 2.4 million U.S. households in 1994 to 5.6 million in 2012. The U.S. is also the largest importer of marine aquarium fishes; every year, it intakes more than 11 million individual fish representing more than 2,300 species, according to Lockwood’s paper.

Non-traditional marketplaces like expos and web traders have totally expanded the exotic pet trade’s reach, says Oliver Stringham, a co-author and post-doc researcher at the University of Adelaide in Australia. Your very own mail-order turtle, snake, or lizard is just a click away, he says, although that doesn’t change the fact that the animal could still grow to be 50 pounds heavier or 50 years old.

“You don’t have to go out of your way to get them,” Stringham says. “But just because acquiring a pet is very easy and accessible, that doesn’t mean all these animals make good pets.”

Researchers also noted that the most popular pet species tend to be the ones that establish new wild populations.

Take, for example, the green iguana. Between 1996 and 2012 it accounted for almost half of the U.S.’s total reptile trade. They start out small, but the green iguana can grow to be up to six feet long and they can be ornery (prone to biting and tail-lashing) which can lead owners to release them. Green iguanas have now established populations in a handful of states where they are not native. Previous studies have similarly documented that the most highly imported marine and freshwater fish species disproportionately contribute to non‐native fish populations in the U.S.

“The more commonly sold they are, apparently, the more likely they are to establish a non-native population,” Lockwood says.

Last week’s paper also identified cities and suburbs in warmer climates as hotspots for the pet-to-pest pipeline (like metropolitan areas in Florida, Louisiana, southern California, and parts of Texas).

While the recent study pulled together current research on the exotic pet trade’s invasive impact, invasion ecologists agree there are still major gaps in knowledge.

Scientists have not yet investigated the burgeoning popularity of pet‐keeping in Brazil, China, and Southeast Asian countries where ecological invasion is also a possible threat. Around the world, records of imported pet species are not standard, and many are incomplete or incorrect. And ecologists can’t always predict which species, if released, are capable of finding food, mates, and suitable habitats where they can reproduce and establish self‐sustaining non-native populations.

“The whole challenge around the exotic pet trade is it’s been understudied,” Olden says. “This is super gnarly and super complicated—we’ve really been chewing around the edges of it.”

Above all, human motivation remains a major mystery of the exotic pet trade. Scientists don’t fully understand the psychology of why owners decide to buy exotic pets, or why they might go on to release them into the wild.

For a study published earlier this year, researchers from the University of Florida interviewed 29 exotic pet owners, sellers, breeders, trappers, and ecologists or conservationists involved in exotic pet trade research. They found respondents agreed pet owners should be better informed about the realities of their exotic companions—as well as the consequences of releasing them.

In both Florida and Long Island, New York, state officials host Exotic Pet Amnesty Days where people can surrender these pets free of charge with no penalties. Several states—among them Oregon, California, Alaska, and Wyoming—operate “Don’t Let it Loose” campaigns to help support pet owners who are trying to figure out what to do with unwanted pets.

Based on past research, Lockwood says, there’s a decades-long lag time between upticks in the exotic pet market and the transformation of a species into a pest. “We probably haven’t seen the last of this,” she says.