For microsurgeons who reattach fingers, ears, and other extremities, leeches remain an invaluable medical device. 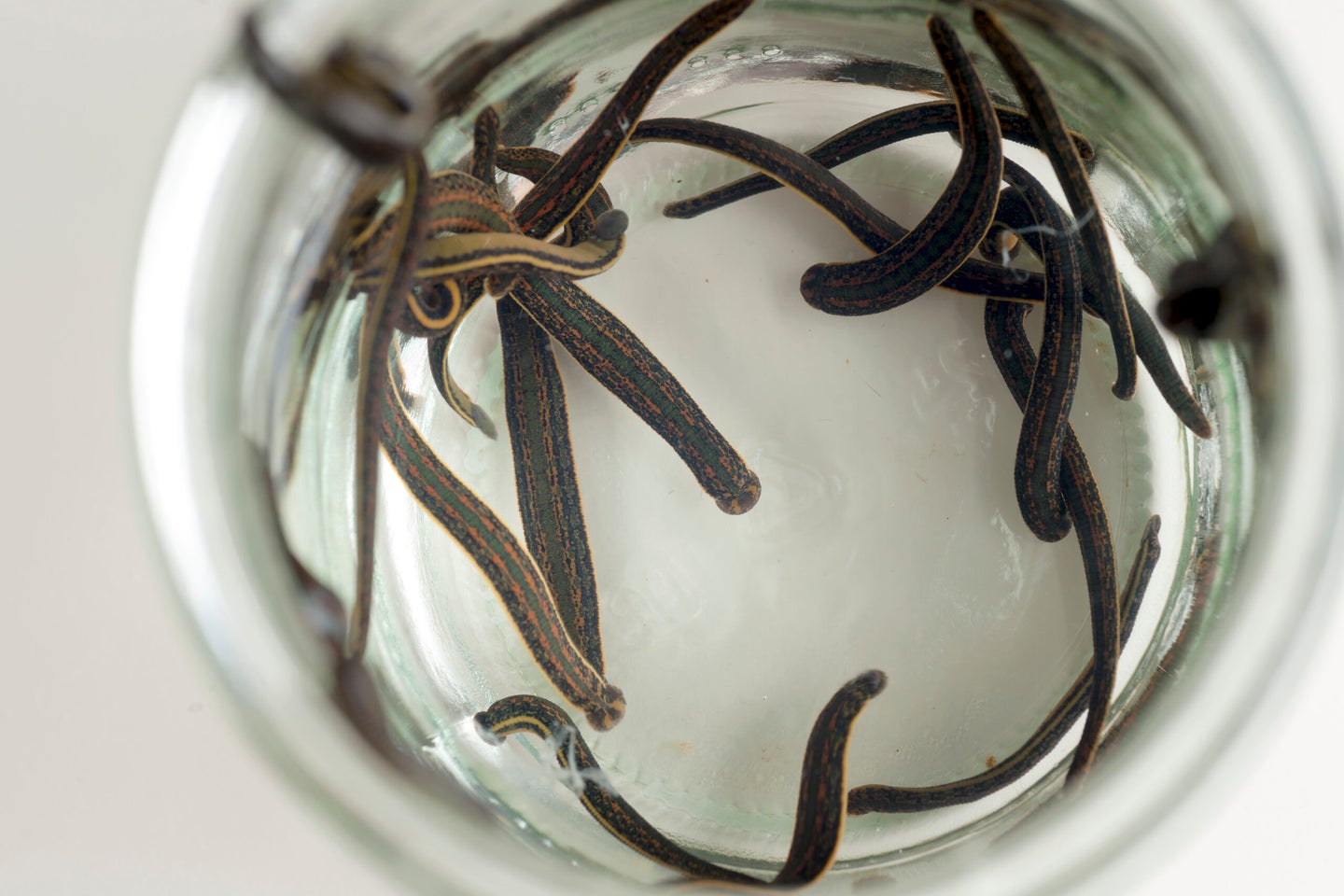 It’s not exactly the kind of therapy you’d expect to get at the hospital: a black, slippery, thirsty leech picked up by forceps from a bucket of its brethren and placed directly onto your skin.

But sometimes—­to some patients’ probable dismay—leeches are, indeed, what the doctor orders.

“We always have leeches on hand,” says Vishal Thanik, a plastic surgeon at New York City’s Bellevue Hospital and New York University’s Langone Medical Center. “If you’ve ever seen a leech, it’s crazy looking. And if you’ve never had to use it, it’s daunting. It’s a bit like time traveling.”

The vampiric worms have a storied place in medicine. Their first recorded therapeutic use dates back to ancient Egyptian treatments for ailments like nosebleeds and gout (Chinese, Arabic, Ancient Greek, and Roman medical records also contain references to leech therapy). In the centuries that followed, physicians used the bloodsucking powers of leeches in an attempt to remedy everything from hemorrhoids to headaches, depression, and even deafness. In 19th century Europe, Hirudo medicinalis, the medicinal leech, was so popular that it was harvested to near-extinction. But once medicine abandoned the concept that most diseases were caused by an excess of blood—a theory that often prescribed bloodletting by physicians or their bloodsucking assistants—leech therapy fell out of favor.

Despite leeches’ historic ties to medical quackery, they do have a legitimate place in modern medicine as a sort of reverse transfusion in cases of imbalanced blood circulation. While ye olde physicians thought leeches could cure epilepsy and even large bruises, the contemporary use of leeches is mostly limited to microsurgeons who reattach body parts like fingers, toes, thumbs, ears, lips, noses, or even bits of scalp.

One of the first times leeches were used this way was in 1985 on a five-year-old whose ear was bitten off by a dog. A few days after surgeons sewed the organ back on, “it turned blackish blue from blood congestion,” according to an account in The New York Times. After failed efforts to drain the blood-filled ear with anti clotting agents and small cuts, Harvard physician Joseph Upton attached two leeches and “the ear perked up right away.” Twenty years later, in 2005, the U.S. Food and Drug Administration approved leeches as medical devices for use in plastic surgery (making them, along with maggots, the first living creature the agency green lit for clinical use).

While statistics on their medicinal use across the country are scarce, plastic surgeons say the procedure has unquestionable benefits—when hospital staff and patients can overcome the queasiness of applying the bizarre blood-sucking creatures directly to patients.

“Patients are usually quite shocked by it at first,” says Patrick Reavey, an assistant professor of plastic surgery at the University of Rochester Medical Center in New York. “I wouldn’t say I’m squeamish, but a leech is a little intimidating. It was freaky—you know, it’s a leech.”

Most doctors today, even those who routinely perform reconstructive operations, will never encounter one, but plastic surgeons are at least trained to use them in certain circumstances, says Adnan Prsic, an assistant professor of plastic and reconstructive surgery at Yale School of Medicine.

“We’re probably the only subspecialty that uses it, across the surgical spectrum,” Prsic says. “We’ve been using them for a long time.”

Unlike skin grafts—in which a surgeon transfers a thin sheet of skin from one area of the body to another—these reconstructive procedures involve reattaching multiple layers of tissue and reconnecting blood vessels one to three millimeters wide under a microscope with sutures thinner than a strand of hair.

To reattach a severed finger, for example, a surgeon will pin bones back together, connect severed tendons and nerves, re-plumb the vascular circulation, and sew skin back in place. In some instances, newly attached arteries flood more blood into the finger than can be pumped out by newly re-connected veins leading to swollen, purplish fingers. That imbalance in blood flow can threaten the finger’s healing, and, in some instances, prevent its survival.

“You need to get blood out of that finger, one way or another,” Rochester’s Reavey says. “Leeches work great.”

So, in those instances, surgeons and nurses will put a leech on the tip of a congested digit to help drain it, says Thanik, who added he usually does this procedure behind a sheet, for the patient’s sake. Once the leech sinks its 300 teeth into the skin and starts feeding, it can digest up to 15 milliliters (about a tablespoon) of blood over about 40 minutes. When the animals are sufficiently full, they gently fall off, Lefebvre says.

“The connotation of leeches is that they’re slightly terrifying. To me, they’re amazing,” she says.

But leech therapy is not just about blood-sucking. Leech saliva contains various bioactive compounds including anticoagulants, anesthetics, antihistamines, and vessel dilators. “They secrete these substances that are like medications,” Prsic says.

Outside a hospital setting, these secretions ensure whatever animal the leech attaches to doesn’t feel the bite, so the leech can feed uninterrupted. But in a clinic, they provide an added benefit.

“It’s usually painless for the patient—even if they’re a little freaked out,” says Lefebvre, adding that some of her patients actually name their leeches to feel more comfortable with their new symbiotic neighbors.

“People think (the leech) is going to drink a ton of blood or it’s horribly painful,” Reavey says, “They make you think of medieval medicine. But it’s hard to beat evolution; they’ve evolved to do this very specific job, and they’re very good at it.”

There are, of course, some risks to using leeches.

For one, the prolonged application of leeches increases the risk for needing a blood transfusion (“You’re losing a lot of blood,” Thanik says). Since leeches rely on a colony of bacteria in their gut to digest blood, it is possible for people treated with leeches to get a bacterial infection as well. Some recent papers have reported increasing antibiotic resistance in Aeromonas hydrophila, one of the bacteria found in leeches and the most common cause of infection. In one five-year retrospective study, researchers found infections occurred in about 4 percent of people who received leech therapy. A vast majority of the about 20 adverse events related to leeches reported to the FDA since 2004 have involved infections after leech therapy or the identification of antibiotic-resistant Aeromonas by hospital staff in their leech stockpiles.

Risk of infection is one of the reasons why it’s common practice for caregivers to give leech therapy patients antibiotics as a preventative measure (since you can’t sterilize leeches like you can a scalpel or an IV).

In May of 2019, Thanik and his colleagues at New York University’s Langone Medical Center published a study detailing some of the other best practices for leeches in reconstructive surgery by analyzing 201 finger re-plantations over eight years. After quantifying the outcomes of hundreds of cases, they found 4.5 days to be the sweet spot for leech therapy, and suggested other practitioners stick to a general guideline of five days.

It’s one of several papers that, in recent years, has looked retrospectively at case studies in an attempt to standardize leech therapy. Currently, no consensus exists among the medical community for how long leeches should be applied for, or how many to use at once.

“That’s the one thing we don’t have going for us: There’s no diligent studies of this,” Prsic says. “These traumatic surgeries can’t be randomized, so we rely on the evidence we have.”

But Thanik says he hopes his paper will help guide doctors presented with situations in which leech therapy could be useful but is not standard.

Currently, their use is more common at teaching hospitals and trauma centers, like Bellevue, where replantation and reconstructive surgeries are more regular. A 2018 University of Michigan analysis of about 15,000 people who lost their fingers between 2001 and 2014 found that an increasing number of cases are transferred to urban teaching hospitals; there, they are more than twice as likely to be reattached (at an average success rate of about 80 percent). The paper also noted people with private insurance or higher income levels were more likely to undergo finger replantation.

Along the same lines, in 2018, Reavey, Thanik, and other colleagues analyzed tens of thousands of finger amputation cases from 2000 to 2011 using information pulled from national databases. Across all years, they found the majority of hospitals that reattach fingers only do so once a year—and that the number of such hospitals dropped from 120 to just 80 a decade later. A small minority of hospitals perform more than 10 finger reattachments each year, they concluded.

“At many hospitals, they’re probably using leeches once a year or zero times,” Thanik says.

And even at hospitals where plastic surgeons regularly employ leech therapy, surgeons see it as a last-ditch effort to keep someone from losing their finger or ear entirely. Ideally, it would never come to that—but when it does, Lefebvre says, they’re a handy option.

“There’s a surgical problem I can’t fix—and there’s a creature that can,” she says. “When I fail, they’re an incredibly elegant solution.”

And, as Reavy keenly points out, it’s also a last hope for the bloodsucking worms, too. “The disadvantage to the leech is it’s their last meal,” he says.