This Newly Discovered Frog Is the World’s Smallest Vertebrate

This little guy is officially the smallest vertebrate on the planet, averaging 7.7 millimeters in size, less than one-third of... 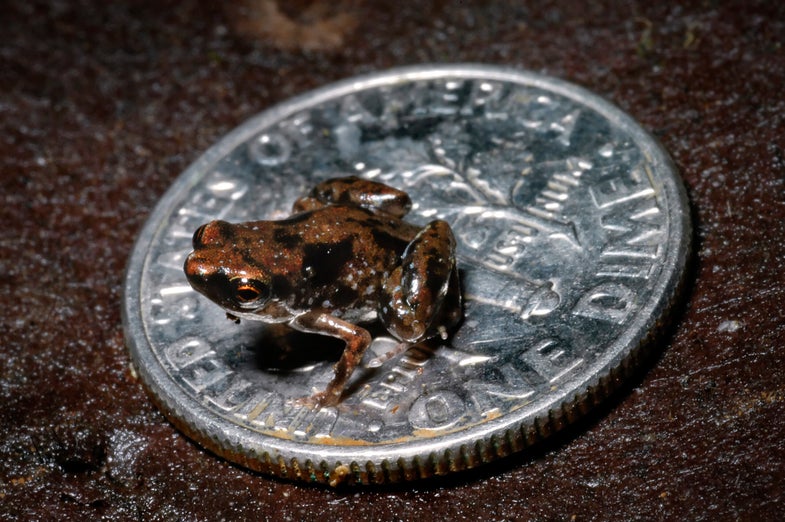 This little guy is officially the smallest vertebrate on the planet, averaging 7.7 millimeters in size, less than one-third of an inch. Named Paedophryne amauensis, the new species of frog was discovered in Papua New Guinea, where it lives in leaf detritus on the rainforest floor.

The wee frog ousts a small Indonesian fish as the world’s tiniest backboned creature. It was difficult to find partly because its high-pitched mating call sounds like that of an insect, according to the scientist who discovered it, Louisiana State University herpetologist Chris Austin. And also because it is really, really small.

Listen to the frog’s micropeeps:

Along with its Lilliputian cuteness, the frog is interesting because some biologists thought an aquatic environment was necessary for the most extreme creatures — water provides buoyancy that could help support the tiniest and the largest animal frames. The previous smallest vertebrate, the carp species Paedocypris progenetica, grows to an adult size of 7.9 to 10.3 millimeters. Compare this to the 25.8-meter (85-foot) blue whale, the largest vertebrate; the subphylum Vertebrata spans three orders of magnitude. But this terrestrial frog shows that water is not necessary for extreme miniaturization.

Austin believes it occupies a rainforest niche, the moist leafy floor, that is untapped by any other vertebrates.

A paper on the new frog appears today in the journal PLoS One.