The World’s Only Iridescent Mammal Is Blind and Lives Underground

What's the point of being shiny if nobody can see you? 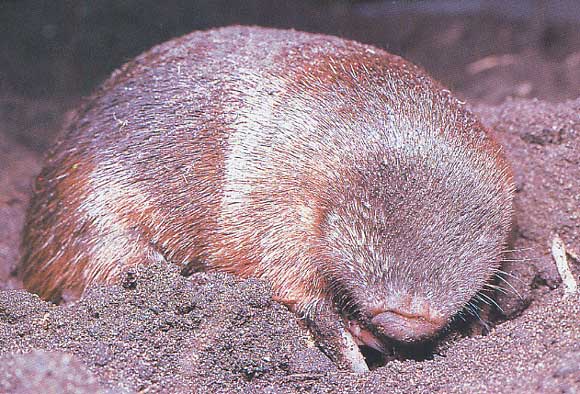 The golden mole, a small mammal (though not a “true mole”) native to southern Africa, is the world’s only known iridescent mammal: its coat is made of peculiar hairs that show a blue or green iridescence. This quality isn’t unknown to animals; many fish, birds, and insects are iridescent, so why not mammals? But the golden mole can’t attract a mate with its shiny coat: it lives underground, and is completely blind.

A recent study conducted by Matthew Shawkey at the University of Akron in Ohio found, through examination of hairs of four species of golden mole through an electron microscope, that the mole’s hairs are not constructed at all as expected. Instead of the typical narrowing point shape, golden mole hairs are flattened, like paddles. And the individual scales on the hairs alternate light and dark, just like the scales of an iridescent butterfly’s wings.

There’s no conclusion as to exactly why an animal whose eyes are so non-functional that they’re covered with skin and fur would bother with fantastically eye-appealing fur. Other iridescent animals typically use the unusual properties of iridescence–iridescent animals appear to change colors when the angle from which they are viewed changes–for camouflage or attraction of mates, both of which are clearly the wrong explanation for these moles’ coloration.

Shawkey suggests that they are in fact an evolutionary accident–that the structure of the hairs makes it easier for the moles to “swim” through the sand in their native habitat, that it makes the hairs hardier and more repellant to water. So the shininess would by a byproduct of other useful traits.