Bats can detect ultra-small perturbations in the air, and understanding this ability could improve sensitive detection equipment. 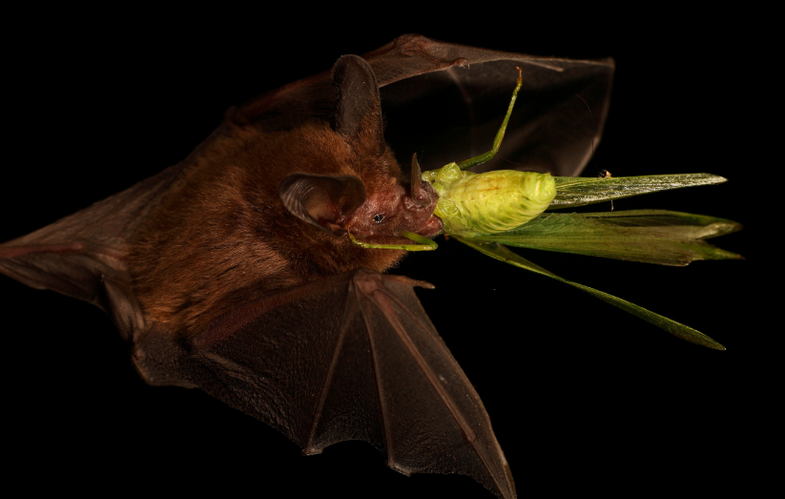 Bats are great at hunting down prey via echolocation, in which their ultrasonic chirps bounce off anything in the air. Specialized ear designs and other features detect the returning sounds, helping the bats determine the location of a moving target. But what about when the target is still?

Bats have been observed seeking out and catching inert insects hiding amid clutter, and finally scientists think they’ve figured out how the animals do it. The flapping motion of a bat moves the air sufficiently to ruffle the wings of their insect prey, and this trifling perturbation can be detected. Understanding the way bats do this could help improve biomimetic sensors, according to Roman Kuc, professor of electrical engineering at Yale University, and his colleague/son Victor Kuc.

The father-son team filmed a common big-eared bat, Micronycteris microtis, with a high-speed camera. The bat hovered over a completely still dragonfly sitting on a leaf, and was able to detect it and pick it up. Watching the playback in slow motion, the Kucs noticed the dragonfly’s wings move ever so slightly in the air current caused by the flapping bat. The dragonfly wings moved in sync with the bat wings. The Kucs then made a model of the induced wing movements and how they affected the returning echoes, according to Yale’s School of Engineering and Applied Science.

To do it, they took a real dragonfly, plastic leaves and a robotic sonar system to generate sound pulses. They used an airbrush to puff air at the dragonfly, simulating the beating bat wings. The resulting echo waveforms gave it away: The leaf didn’t really ruffle, but the dragonfly wings did. The Kucs say that bats can figure out the difference, and use it to detect the location of prey that is otherwise silent and totally still.

The study is published in the Journal of the Acoustical Society of America.