Scientists Build a Data Storage Device Out of Salmon DNA

It’s good smoked, straight up on the grill with a little lemon and butter, or rolled into sushi. And now,... 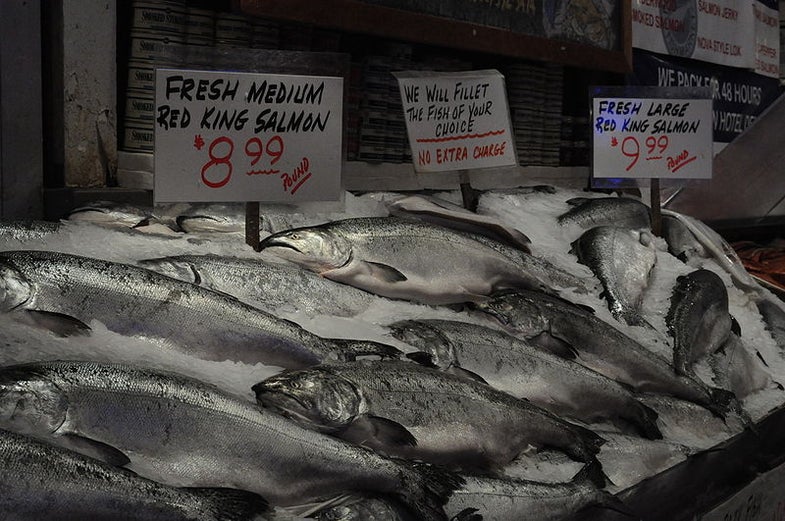 It’s good smoked, straight up on the grill with a little lemon and butter, or rolled into sushi. And now, thanks to researchers at Taiwan’s Tsing Hua University and the Karlsruhe Institute of Technology in Germany, salmon is also good sandwiched between two electrodes. Using silver nanoparticles, a couple of electrodes, and a thin layer of salmon DNA, those researchers have developed a “write-once-read-many-times” (WORM) data-storage device that they think could eventually lead to a replacement for silicon.

Their device basically works based on the way silver atoms behave inside a thin film of salmon DNA. Shine a UV light on such a system, and the silver atoms will bunch into nanoparticles within the DNA film. Add electrodes to both sides of the film, and you’ve got an optical data storage device.

And here’s how it works: when there’s no (or little) charge passing through the device, only low (or no) current is allowed to travel through the device (which makes sense). That creates the device’s “off” position. If you slowly increase the voltage however, the device is unable to hold a higher charge. That is, until you reach a certain voltage threshold (about 2.6 volts), at which point the device suddenly switches to high conductivity with good retention of that state.

That switching ability above a certain voltage threshold creates two distinct “off” and “on” states that can be used to store data like any other optical data device. And the changes in conductivity are basically irreversible, meaning once a device has been switched, it stays in that conductive state (either on or off). That means you should be able to write something into a DNA-based data storage and then retrieve that info later.