Video: A Yeti Crab That Grows Its Bacterial Meals on Its Own Body

A species of deep sea crab, named, as more things should be, after the Himalayan snow monster, grows its own... 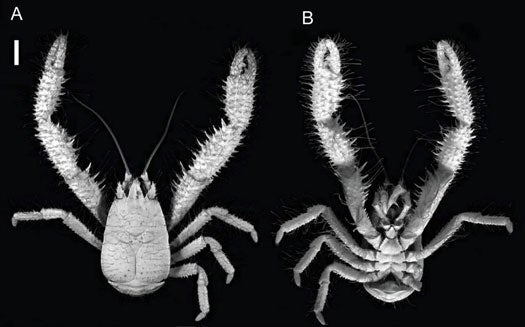 A species of deep sea crab, named, as more things should be, after the Himalayan snow monster, grows its own food…on its body. The crab, part farmer and part farm, raises cultures of extremophile bacteria on its claws, and then harvests its meals.

The yeti crab is named for the bristly, hairy claws on which it cultivates gardens of symbiotic bacteria. The crabs live near methane seeps in the deep ocean off the coast of Costa Rica, where methane and hydrogen sulfide “belches” from cracks on the ocean floor. The bacteria derive energy from the methane seeps, and the crabs eat the bacteria. The hosts tend their bacterial gardens by waving their claws, stirring up the water and bathing the bacteria in fresh, oxygen- and hydrogen-sulfide-rich water. The crab harvests its food using comb-like mouthparts.

The crab was identified by Andrew Thurber, a marine ecologist at Oregon State University in Corvallis. The first species of yeti crab was discovered in 2005 near Easter Island. This new species, Kiwa puravida, was first identified a year later. Its scientific name comes from a Costa Rican saying meaning “pure life.”

Most of the crab’s diet appears to come from the bacteria living on their claws, and not, as is the case with other marine crustaceans, from eating photosynthesizing plankton. Carbon isotopes and fatty acids in the crabs match those of the methane-converting bacteria rather than plankton. “We clearly showed that this species isn’t using energy from the sun as its main food source,” said Thurber. “It’s using chemical energy from the sea floor.”