Metamaterials Can Exert a Whole New Kind of Force

Similar to the mysterious clinging ability of geckoes 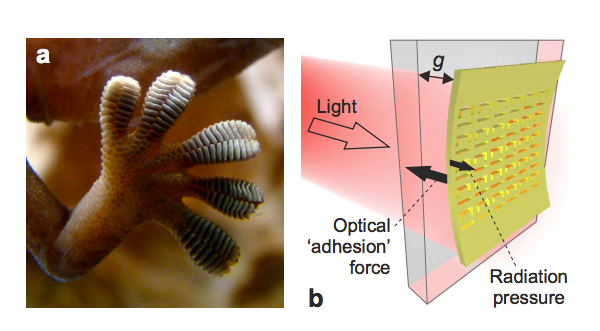 Today in crazy tricks of physics, a few researchers over at the University of Southampton in the U.K. have theorized that metamaterials ought to be able to generate a wholly new kind of force–something akin to the adhesive force created by gecko toes–that can be turned on and off optically with the throwing of a switch. That force ought to be strong enough to overcome the force of Earth’s gravity, opening the door to a range of potential applications–if and when the actual force is found.

The fundamental force here is the same one that powers solar sails in space–the radiation pressure exerted by light on any surface it strikes. If you custom-construct a metamaterial to allow tiny oscillations of electrons–called plasmons–to exist on its surfaces, those plasmons should interact with the electrons in a nearby metal or dielectric surface. The resonant effect created in such a setup should, theoretically at least, pull the metamaterial and the object together.

Moreover, all of this can be controlled by light. Metamaterials–if you haven’t been keeping up with this kind of science–are materials that have been engineered to have specific and controlled optical properties. So under such a setup as the Southampton team proposes, the frequency and intensity of a light source would initiate and then control the force of attraction. That basically means this new force can be switched on and off easily and quickly.

Naturally, applications for something like this abound, from the nano-scale up to the possibility of gecko-like adhesion for machinery (and perhaps for humans? is this what they were getting at in the Tom-Cruise-scales-the-Burj scene in Ghost Protocol?). But first, they have to find it. In their paper, the researchers say the force should be “easy to detect.” We say get cracking then.