Blackest Planet Ever Found, Absorbs Nearly 100% of Light That Reaches It

Kepler has found the darkest known planet in universe–a Jupiter-sized exoplanet some 750 light-years away that is so black that... 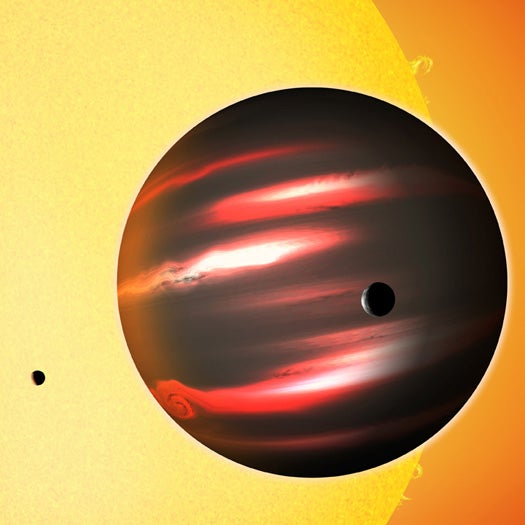 Kepler has found the darkest known planet in universe–a Jupiter-sized exoplanet some 750 light-years away that is so black that it reflects just one percent of the light that reaches it. TrES-2b is so black that it’s darker than coal, or any other planet or moon that we’ve yet discovered. It’s less reflective than black acrylic paint. To summarize: it’s really, really black.

But TrES-2b is not completely black. It emits an extremely faint red glow, like that of a hot ember. And it turns out that heat is the main culprit behind this darkest of dark planets. TrES-2b orbits its star at a distance of just 3 million miles (by comparison, we’re about 93 million miles from our sun), which leads to surface temperatures on TrES-2b of more than 1,800 degrees.

That’s too hot for the formation of ammonia clouds that would reflect some of that incoming radiation as they do on Jupiter. Rather, TrES-2b’s atmosphere is made up of things like vaporized sodium, potassium, and titanium oxide–things that actually compound the problem by absorbing heat. But even these don’t fully explain the planet’s extreme blackness, which is still puzzling astronomers. There’s some kind of strange chemistry going on out there that even Kepler can’t see.