Researchers at Fermilab are building a “holometer” so they can disprove everything you thought you knew about the universe. More... 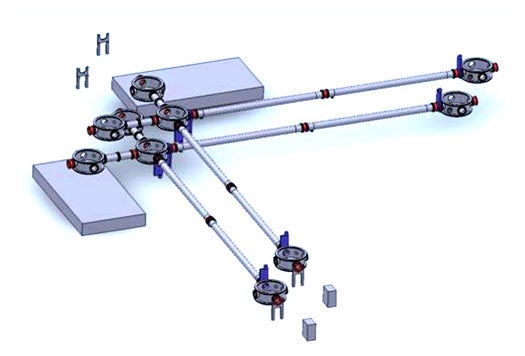 Researchers at Fermilab are building a “holometer” so they can disprove everything you thought you knew about the universe. More specifically, they are trying to either prove or disprove the somewhat mind-bending notion that the third dimension doesn’t exist at all, and that the 3-D universe we think we live in is nothing more than a hologram. To do so, they are building the most precise clock ever created.

The universe-as-hologram theory is predicated on the idea that spacetime is not perfectly smooth, but becomes discrete and pixelated as you zoom in further and further, like a low-res digital image. This idea isn’t novel; recent experiments in black-hole physics have offered evidence that this may be the case, and prominent physicists have proposed similar ideas. Under this theory, the universe actually exists in two dimensions and the third is an illusion produced by the intertwining of time and depth. But the false third dimension can’t be perceived as such, because nothing travels faster than light, so instruments can’t find its limits.

This is theoretical physics at its finest, drowning in complex mathematics but short on hard data. So Fermilab particle astrophysicist Craig Hogan and his team are building a “holometer” to magnify spacetime and see if it is indeed as noisy as the math suggests it might be at higher resolution. In Fermilab’s largest laser lab, Hogan and company are putting together what they call a “holographic interferometer,” which – like a classic interferometer – will split laser beams and measure the difference in frequencies between the two identical beams.

But unlike conventional interferometers, the holometer will measure for noise or interference in spacetime itself. It’s actually composed of two interferometers – built one atop the other – that produce data on the amount of interference or “holographic noise.” Since they are measuring the same volume of spacetime, they should show the same amount of correlated jitter in the fabric of the universe. It will produce the first direct experimental insight into the fundamental nature of space and time, and there’s no telling what researchers delving into that data might find out about the holographic nature of the universe.

So enjoy the third dimension while you still can. Construction on the first instrument is already underway, and Hogan thinks they will begin collecting data on the very nature of spacetime itself by next year.