They’re out there, biding their time. Waiting patiently. And when you least expect it, they’re going to plunge you and... 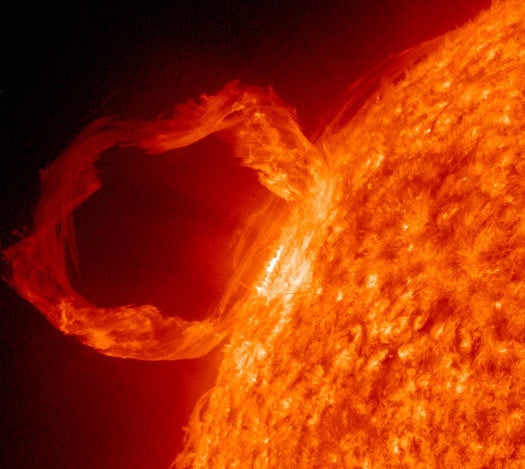 They’re out there, biding their time. Waiting patiently. And when you least expect it, they’re going to plunge you and everyone you care about into total darkness. Luckily, we can see solar storms coming from about 93 million miles away, and NASA is now in the process of creating a “Solar Shield” that should be able to minimize the damage to power grids caused by electromagnetic disturbances in the atmosphere and ground caused by foul weather on the sun.

The threat to power grids during bad solar weather is known as GIC, or geomagnetically induced current. When the sun ejects a huge coronal mass in our direction, the impact with our atmosphere shakes up Earth’s magnetic field. That generates electric currents from the upper atmosphere all the way down to the ground. These can cripple power grids, overloading circuits and in some cases melting heavy-duty transformers.

Those transformers are very necessary to keep the power flowing. They’re also expensive, irreparable in the field, and can take a year to replace. Meaning that a massive coronal ejection could knock down entire power grids for long stretches of time, grinding economies to a halt and making life more than a little inconvenient.

But NASA has a plan to battle these blackouts with blackouts. If transformers are offline at the time the storm hits they will not be affected, so the trick is to figure out where and when a storm is going to hit before it reaches the atmosphere. To do that, NASA’s SOHO and two STEREO spacecraft identify a coronal mass ejection (CME) heading toward earth and create a 3-D image of it, allowing researchers to characterize its strength and determine when it will hit.

Depending on the intensity of the CME, the trip from sun to Earth can take 24-48 hours. NASA would track the CME across the sky, with the pivotal moment coming about 30 minutes prior to impact when the storm comes screaming past the ACE spacecraft, something like 930,000 miles from Earth. Sensors aboard ACE gather more data on the storm’s speed, magnetic field, and density that is fed into computer models at NASA’s Goddard Space Flight Center.

With less than 30 minutes until impact, NASA’s models calculate the places most likely to be impacted with dangerous GIC and utilities are notified so they can pull their grids offline. This will cause a blackout in the region, but only a temporary one. When the storm ends, the grids come back online and life goes on.

Solar Shield is experimental at this point, and its hard to know how successful it will be, mainly because it hasn’t had the trial by fire it needs to see if it works. Solar weather has been fairly quiet this year, so the team hasn’t been able to gather the data it needs. But considering we’re going into a period of increased solar activity (solar weather ebbs and flows cyclically) that will peak in 2013, Solar Shield will likely get its chance soon enough.