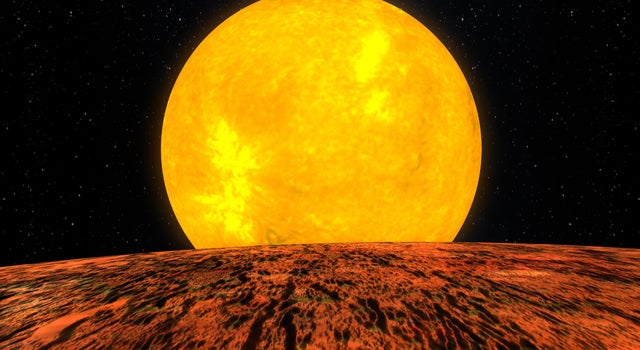 A tiny world of molten rock, orbiting scorchingly close to its host star, is the smallest planet ever discovered outside our solar system, NASA announced today. And it’s likely only the first in a parade of planet discoveries to be announced this spring by the Kepler Space Telescope team.

Kepler-10b, as the new world is called, is a rocky, dense and hellish planet just 1.4 times the size of Earth. It’s not in the Goldilocks zone, however — it’s much too close to its star for life to exist. It’s so hot (about 2,500 degrees F at the surface) that boiled iron and silicates are flowing into the stellar wind, much like a comet’s tail.

Kepler-10b is more than 20 times closer to its star than Mercury is to the sun, and it whips around the star once every 0.84 days. Its average density is comparable to that of an iron dumbbell, says NASA — about 8.8 grams per cubic centimeter, or 0.32 pounds per cubic inch.

Kepler’s super-precise camera was designed to spend three years staring at 150,000 Sun-like stars, searching for evidence of Earth-like planets. When a planet crosses the face of its star, called a transit, the star will get a tiny bit dimmer, and Kepler will notice the change.

Kepler-10, about 560 light years away in the constellation Cygnus, was the first star identified that could potentially harbor a small transiting planet. Evidence of the fiery planet was first spotted last year, but planet-hunters needed to confirm it, so they studied the star using the 10-meter telescope at the W.M. Keck Observatory in Hawaii. They noticed tiny Doppler shifts, changes in the star’s spectrum, caused by the tiny planet’s gravitational tug.

Because Kepler-10 is so bright, scientists are able to paint a pretty accurate picture of its properties, which in turn yields plenty of information about its planets. The NASA video below has some more detail and a beautiful artist’s rendering of this distant hellscape.

Kepler-10b is far from the first rocky, Earthlike planet scientists have found — Gliese 581g is rocky, just close enough to its star to harbor liquid water, and sufficient gravity to hold on to an atmosphere, for instance. But Kepler-10b is the littlest so far, and it shows the telescope team’s ability to find truly Earthlike worlds in Earthlike places. Plenty more discoveries like this one could be coming in the next few weeks, too.

Last fall, the 28-member Kepler team released data on 156,000 stars, including 700 that likely harbor planets, allowing astronomers to conduct their own follow-up studies. But team members kept 400 of the juiciest ones for themselves. Their deadline is approaching — they have until next month to publish their findings and claim exoplanet firsties.

Although we may never have enough fuel to pay a visit, it’s kind of nice to know plenty of Earthlike planets are out there.