Instant Expert: What Interstellar Dust Can Tell Us

Dust may help astronomers understand the formation of stars and planets 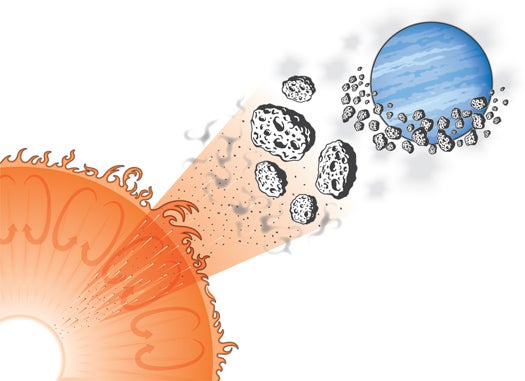 Riding in a car through space, if you were to hang your white-gloved hand out the window, it would come back dirty. The space between the Milky Way’s stars is filled with gas and dust—lots of dust.

This summer, the European Space Agency’s Planck satellite produced a high-resolution dust map. The ultimate goal of the project is to map the cosmic microwave background, the electromagnetic leftovers of the universe’s violent beginning.

Since warm dust grains emit microwaves, Planck made its map simply to see what’s behind the dust. Cosmologists usually consider the dust-emitted microwaves to be “noise” that obscures their data, worth analyzing only to erase from their measurements of the cosmic microwave background. But for other astronomers, interstellar dust is useful in its own right. Some of them plan to use the interstellar-dust data to study the Milky Way’s magnetic field, the origins and behavior of which are not well understood. Others, like Bruce Draine of Princeton University, will study the size distribution and composition of the grains themselves. “The universe is beautiful,” Draine says, “and one of the things that makes it beautiful is the dust.”

The Life of a Dust Grain

1. INSIDE THE STAR
Astronomers don’t know the identity of all the interstellar dust factories, but they do know that red giants—stars of up to eight solar-masses in the final stages of their life—generate quite a bit of dust. Dust components, such as carbon and oxygen, are made deep in the star’s core when helium atoms fuse together.

2. ON THE STAR’S SURFACE
Convection within the red giant dredges the new proto-dust atoms from the core up to the surface. The conditions and elements present in the stellar atmosphere will dictate the chemical composition of the dust. Then the star’s pulsations and winds fling those atoms into space.

3. IN INTERSTELLAR SPACE
As the atoms continue to drift through space, they cool and condense into dust grains. From there, new dust grains will float out into the cosmos, where they may collect into very small rocks, then asteroids, then planets. In July, planetary scientists announced two candidate dust particles from the Stardust spacecraft, which returned to Earth in 2006 after seven years of collecting dust samples in space. This will bring the total number of dust grains currently in human possession to three. Finding even one requires a painstaking search of Stardust’s particle trap using a microscope. The first dust particle, also captured by the Stardust experiment, was announced in March. Of the three, two of the particles are magnesium-rich, while the third is carbon-based.

IS INTERSTELLAR DUST VISIBLE FROM EARTH?
Yes! On a clear night far from city lights, stargazers can see dark patches within the smooth band of the Milky Way near the constellation Cygnus. Those patches are ribbons of dust that block the stars behind them.

HOW DOES IT AFFECT THE GALACTIC ENVIRONMENT?
Dust grains are the building blocks of planets. They also shield gas clouds from starlight and, by keeping those clouds cool, allow that gas to condense and make new stars. “It’s like an ecosystem,” says Gillian Knapp, an astronomer at Princeton. “It’s the little stuff that matters, and how it evolves together.”

Interstellar Medium: What astronomers call all that stuff between the stars. Dust grains are only about 1 percent of its mass, with hydrogen accounting for 80 percent and helium providing most of the rest.

Interstellar Dust: Dust grains are agglomerations of atoms, including carbon, silicon, oxygen, magnesium and aluminum. Silicon-rich grains make up about 70 percent of the dust inventory, and carbon-rich grains constitute the remainder.