Just a question of cloud cover 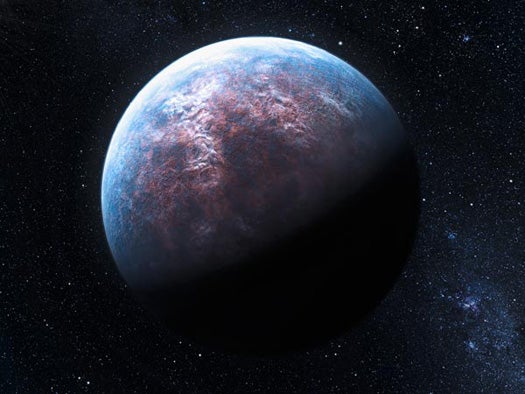 Scientists have tracked down another goldilocks planet 31 light-years from Earth, and according to astronomers it has some strong points in its favor when it comes to the possibility of harboring the ingredients for life. HD85512b orbits an orange dwarf in the constellation Vela, and it’s just the right distance from the sun–and just the right mass–to rank among the most Earth-like planets ever discovered.

And by “among,” we mean really one of just two (or three, depending on how you feel about Gliese 581g). Of the hundreds of exoplanets astronomers have recently discovered orbiting distant stars, only one–Gliese 581d–has been of the proper mass and distance from its star to be considered a strong candidate for habitability. Nearby Gliese 581g was once thought to be even more Earth-like than 581d, until some scientists asserted that 581g doesn’t even exist–a point that is still under debate.

HD85512b was discovered by the ESO’s High Accuracy Radial velocity Planet Searcher, or HARPS, in Chile (it’s the same instrument that found Gliese 581d. The data show that HD85512b is roughly three-and-a-half times the mass of Earth and rings its planet on the inner fringe of the so-called “goldilocks zone” that is not to distant and not too close to harbor liquid water. It’s size is also indicative of an Earth-like atmosphere of oxygen and nitrogen rather than the hydrogen and helium that dominate the atmospheres of larger worlds.

That alone makes it a potential candidate for life, but HD85512b has a couple of other characteristics working for it. For one, its orbit is almost perfectly circular and stable, so any climate on the planet wouldn’t swing wildly as it orbits. The planetary system is older than our own–a full one billion years older–so clearly it’s had enough time for life to potentially have developed there. in the same vein, its star is also more mature than our sun so it is less prone to violent solar activity that could destabilize the planet’s atmosphere.

Of course, there’s no way to tell if it actually has an atmosphere with modern instruments, and atmosphere is a critical ingredient here. Since HD85512b is orbiting on the inner portion of the goldilocks zone, it is more akin to Venus than to Earth in the amount of solar energy it’s taking on. But scientists speculate that cloud cover of fifty percent or more could offset that proximity enough to allow life to thrive–albeit a kind of life more suited to a balmy, hot environment (relative to Earth’s).

On average, Earth boasts 60 percent cloud cover so the idea of HD85512b having 50 percent isn’t so far-fetched. In fact, it’s probably more likely than the idea of humans building a light-speed spacecraft and then making the 31-year journey to go in for a closer look at the weather. But it’s fun to think about.