The red dwarf Gliese 581, one of our own solar system’s closest neighboring stars and a regular point of exoplanetary... 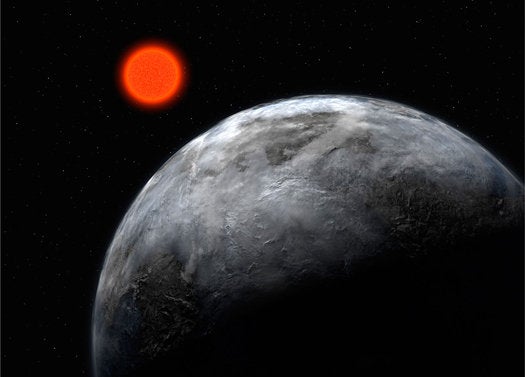 The red dwarf Gliese 581, one of our own solar system’s closest neighboring stars and a regular point of exoplanetary interest, can finally claim the title of owning the first confirmed potentially-habitable expolanet. French researchers running complex computer models have demonstrated that the planet Gliese 581d–once thought too cold to sustain life–indeed could possess the proper ingredients to sustain liquid water and an atmosphere.

Gliese 581 and its “Goldilocks zone”–the orbiting range wherein habitable planets are neither too close nor too far from their star to support life–have received a good deal of attention since the first of three planets thought to be orbiting there was discovered in 2007. One was 581d, the other 581c. Gliese 581d was originally deemed to close to the outer edge of the zone (read: cold) to support life, but hopes ran high for 581c until a later analysis proved it too close–temperatures on the planet are likely akin to those on Venus, where any liquid water would boil off immediately.

Then there was astronomers’ brief flirtation with Gliese 581g, a planet thought to be orbiting somewhere between the 581c and 581g, primely placed to support liquid water on its surface. But upon closer inspection, it turned out that 581g probably doesn’t even exist.

Now interest has turned back to 581d, the outermost of the three (possible) planets and one that all scientific analysis suggests is real. Using a new kind of computer model that is better capable of simulating possible climates, a team of French researchers has determined that 581d could very well have a dense, stable carbon dioxide atmosphere that would keep the planet warm enough to support oceans and to prevent atmospheric collapse on its perpetually dark side.

Oh, and that’s the thing: Gliese 581d wouldn’t be particularly hospitable to humans. For one, it is tidally locked, so one side always faces the sun and one much colder side is in perpetual darkness. While twice as big as Earth, its mass is seven times greater meaning the effect of gravity would be roughly double. And that atmosphere: toxic. Not that it really matters, because it would take humans 300,000 years or so to get there by current methods, and that’s if we had a spacecraft capable of traveling that far.

But that makes the finding no less exciting for astronomers. For the first time we know beyond just speculation that a planet has the potential for life. While not yet possible, future generations of telescopes will be able to directly search for life on Gliese 581d, and who knows what they might find there?